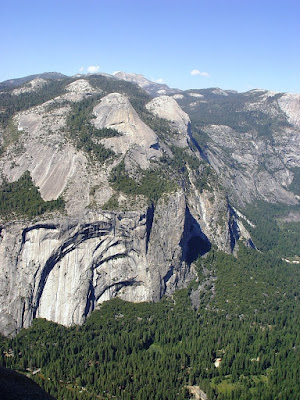 Today is the four-month anniversary and the 100th post on Geotripper! I wasn't really sure what it was going to be like, and whether I would be able to keep the site active with all of the other stuff going on in my life as a college teacher, but I have made it work by allowing myself a blog entry as a reward for finishing a pile of grading. And there are always piles of grading! But I have enjoyed sharing my photographs and opinions, and I have especially appreciated the positive feedback that I have received from the geoblogosphere. I enjoy being a part this interesting group of earth scientists, and I hope to see more of the students and teachers out there getting involved! It was far easier to start a blog than I thought it would be and it has been rewarding. Now I will have to see if I can make it all the way through a year!

Today's view of the abyss comes from a familiar tourist stop: Glacier Point. It is accessible by paved road and trail, and is visited by hundreds of thousands of people every year. It is easily one of the greatest scenic vistas on the planet. The view is dominated by Half Dome and the Tenaya Canyon, as well as the cliffs around Yosemite Falls. Between the two is an interesting view of a pair of exfoliation domes called North Dome (left) and Basket Dome (right). From the valley floor they are barely visible above Royal Arches and Washington Column.

Exfoliation takes place when the weight is removed from homogeneous rock like granite, and the rock expands. It fractures parallel to the surface and this leads to a tendency to remove corners and edges of otherwise rectangular rocks. A great many domes grace the Sierra Nevada, and a vast number of them have never been touched by glaciers.

The mountain on the skyline is Mt. Hoffman, which is a high peak close to the geographic center of Yosemite National Park. N. King Huber used the view from the summit as the springboard to a discussion of the geology of the park in his excellent Geologic Story of Yosemite National Park. It is a great hike, and is likely to be the subject of future posts.
Posted by Garry Hayes at 3:51 PM

Congrats on the milestone! Love your blog -- keep it up.