Colorado Plateau Site of the Day 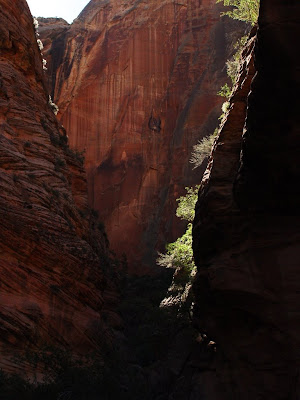 It's been a depressing week, I guess. Two angry rants in a row, about geologic tragedies and stupid politicians. I am finding solace in that a wonderful field trip is coming up in June, and I will be on the Colorado Plateau after a too-long absence of three years. Can you figure out where this photo hails from?

One point for guessing the park or monument. Clue: The site made the list on Callan Bentley's Scary Map du jour

Two points for describing the stratigraphy, age and environment of the formation.

Five points for identifying the trail, because I remember it being one of the tougher trails I have ever hiked, and I don't think many people have been on it. But what a payoff at the end!

Have a nice evening!
Posted by Garry Hayes at 10:22 PM

Because of the Scary Map, I'll have to guess Zion. Also, it looks like the Jurassic Navajo Sandstone (Jn). As for the trail - hmmm.

Glad you're getting to go to the Plateau area. I haven't been there since 2006 in a relatively fast trip to Colorado.

I had been thinking of putting up some Mancos Shale!

My first impression was also Zion. If so, the Navajo Sandstone (Jurassic, aeolian - festoon crossbeds visible at left of image) is the only real candidate for the canyon walls.

Although the Angel's Landing trail fits your description of tough with a great payoff, it is one of the more commonly hiked trails and doesn't spend much time in the bottom of a canyon as your picture suggests.

Based on everything else I can see, I'd say this is the Hidden Canyon Trail or possibly the trail that goes up Echo Canyon and joins the East Mesa Trail headed for Observation Point.