Why I Love the North Rim 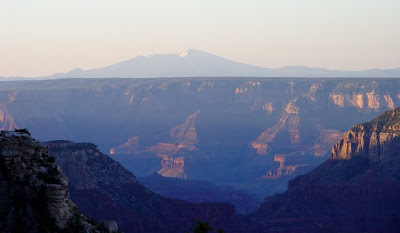 Seeing my students graduate is really great, but taking a person to a place like the Grand Canyon for the very first time is an even greater thrill for me as a teacher. We stay most years on the North Rim most years for a number of reasons.

The South Rim gets something like 90% of the visitation, which is reason enough to avoid it, but because more people are there, the rim has more trailheads, more facilities, museums and so on. The North Rim, in contrast, is around 1,000 feet higher, cooler, and more moist, and thus the forest is predominantly composed Ponderosa Pine (instead of pinon), and there are more meadows. One of the nicest aspects is the location of the group campground: it is only a few hundred feet from the rim (South Rim campgrounds are nearly a mile back). I prefer the views from the North Rim; the higher elevation offers a panorama of the landscape south of the rim, including the San Francisco Peaks volcanic field.

Today's picture is a morning shot looking south towards the San Francisco Peaks. I will have to leave it to others who know more about this kind of thing to explain why there is a gigantic composite volcano and associated volcanic field here. I imagine there is a sort of 'manhole' effect where lavas are leaking out from under the thick continental crust of the plateau country where it has been faulted by the current extensional regime, like a sewer system backing up. The high point on the rim, Humphrey's Peak is over 12,000 feet high (Arizona's highest mountain), but the original summit may have been several thousand feet higher. From the east, the complex looks surprisingly like Mt. St. Helens. The field is mostly Pleistocene, and at least one volcano erupted within the last 900 years (Sunset Peak National Monument).
Posted by Garry Hayes at 8:34 PM

The North Rim is a favorite of mine, also - and the North Rim Lodge is a great place to stay, if you're not into camping.

I've never heard of the "manhole effect." I thought that San Francisco Mountain was there primarily so that field camps could see the elevation effects on vegetation, and also so that one would be able to see the ocean from Arizona. :)

One of my favorite spots too! Mostly the Vulcan's Throne area, since I chose to do my first real research paper on the lava dams in that area. I couldn't stand staying too long on the South Rim after discovering there was a grocery store and an Imax theater. Blech.