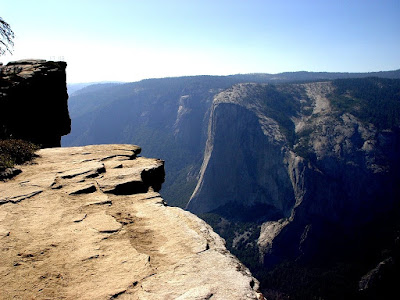 Yosemite National Park is simply one of the most extraordinary landscapes on the planet, and I have been trying for several weeks to highlight some of the lesser-known parts of the valley, the kinds of places that the average visitor might overlook while staring at the more famous wonders in stone and water that grace the park. Today I am starting a journey to a different place, the rim of the valley. 90% of the visitors to the park congregate on the valley floor, and a significant number of them drive the paved road to Washburn and Glacier Points. These two sites must be some of the most spectacular viewpoints in the world, and a visit to Yosemite is not complete without stopping at both of them. If you are visiting Yosemite anytime soon, the road has just been opened.

Still, they are crowded, noisy and fences and paved trails make it clear where you have to go. There is nothing quite like standing on the brink and staring into the abyss below, alone, with nothing between you and the whole expanse of cliff and valley floor but empty vast space. I am only beginning to discover those places. Today's pictures are taken from Taft Point, a viewpoint at the end of an easy one mile trail. Although the trailhead parking lot is often full, when I was there I saw only 3 or 4 other people on the trail, and I had the clifftop view all to myself (I think most people must have been climbing Sentinel Dome; more on it later).

Yosemite Valley is abrupt. There is no other way to put it. One walks through a gentle landscape of soil and forest, the occasional outcrop of weathered granitic rock, noticing flowers and greenery. A few steps later comes several feet of barren horizontal rock, and then suddenly the world falls away into oblivion. The land is of two ages. The flatness is old and gentle, ancient and unglaciated, a hint of the shape of the land before the mountains began their long and relentless rise into the sky. The other is youthful, brash, a place of action and change. First carved by river, then undercut by glacier, and shaped finally by mass wasting, the cliff is a temporary adjustment, a stand off between shear forces, friction and gravity. It is hard to stand on two feet and look over this edge; the feeling is to crawl towards the cliff, a form of supplication to the vast forces at work here.

The cliff across the valley in the picture above, if you don't recognize it, is El Capitan, the 3,000 foot-high cliff that dominates the west opening to the valley. The chockstones in the photo below have dropped into the Taft Fissures, joint openings caused when the previously deeply buried granitic rock expanded and cracked. The drop-off below the fissures is thousands of feet. 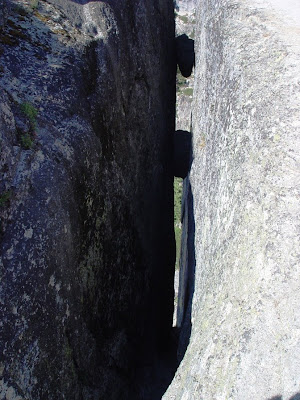