Staring up out of the Abyss: Check out this fire in Yosemite 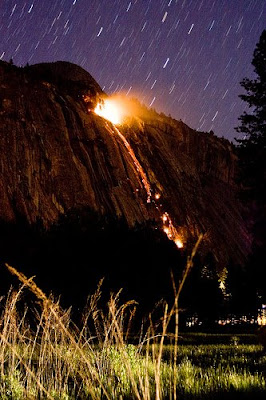 Since I posted on the subject of North Dome this afternoon, this spectacular photo was posted at http://www.yosemiteblog.com/2008/05/07/firefalls-2008-let-the-fire-fall/ and there is a link to others. It is amazing what some people can do with digital cameras!
Photo by Edie Howe-Byrne via Flickr.
Posted by Garry Hayes at 12:20 AM

I saw this and thought, cool, an old photo of the firefalls, something I saw a few times as a child. But it's contemporary!

A good friend of mine in Australia sent a link to me this morning of this--what a treat to see this on your blog.

I really wish Flickr had a way to notify users their pictures were being blogged so that I could respond quicker.

I'd just gotten my first digital SLR when this happened, and really didn't know what I was doing with it yet. I'm pretty sure that if it happens again, I'll get better pictures.