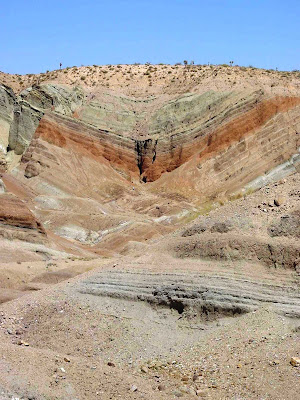 Following the example of Silver Fox and Lost Geologist, I decided to throw a fault and fold foto into the geomix this weekend. This is also still on the theme of my impending Colorado Plateau journey, not because it is there on the plateau, but because this is often my first stop on our trip. It has it all for a first day geology student: faults, folds, stratigraphy, unconformities, paleontology, economic geology, and nearby archaeology. Geologists from southern California will recognize it right away as the Barstow Syncline, located within the Barstow Formation, and exposed in the appropriately named Rainbow Basin Natural Area. I did my very first field mapping here, back in 1979 or so, with Pomona College.

The syncline lies near exposures of the Calico fault, an active right-lateral strike slip fault. The Landers quake in 1991 ruptured part of the fault zone. A minor offset cuts the left limb of the syncline and other faults slice through the basin, making it an excellent place for mapping.

The layers exposed in the fold are terrestrial and fresh water sediments of the Miocene Barstow Formation, a critically important stratigraphic and paleontological element of southern California geology. The vertebrate fossils found here include early species of elephants, camels, antelope, three-toed horses, cats, and many others. In some nearby areas, silicified insects have been discovered as well. Because the layers of the formation are bracketed by dateable volcanic ash layers, they form the basis of the Barstovian Land Mammal Stage of the geological time scale. When similar species of animals are found in other parts of the country, they can be dated to around 15 million years by comparison to the Barstovian fauna.

Looking for a good example of an angular unconformity? Check out the layer of alluvium across the top of the fold! The region eroded to a relatively flat surface in Pleistocene time and was covered by alluvium, but more recently the land was warped upward and is presently being rapidly eroded.

The Barstow Formation was the host rock for barite and silver ores, as well as borate minerals, and a number of mining ghost towns dot the region. Calico is the most famous, and has been developed as a regional county park (read: tourist trap), but it is a nice enough place to visit. Kenny Rogers and the First Edition once actually produced a two disk record album full of songs about the ghost town. Farther to the east, the Calico Early Man Site offers evidence for the presence of humans in the western hemisphere far earlier than is accepted by most archaeologists.

Want to see Rainbow Basin? The Bureau of Land Management site offers the directions and information on camping and touring the region.

Update: It didn't take long to find out that others really love the place, too (and beat me to the blog post!). Ron Schott has a blog entry here (although I am having trouble following the link), and Dave Schumaker has one here. Thanks for the info!
Posted by Garry Hayes at 1:04 PM

Oh yes! I love this place. Spent a few weekends here doing some mapping throughout the basin.

I wrote about this back in April too.

Sorry about that - my university is replacing a bunch of switches, so our internet access (and your ability to see my webserver) has been very spotty for the last couple of days.