Other Places, Other Trails: the Colorado Plateau 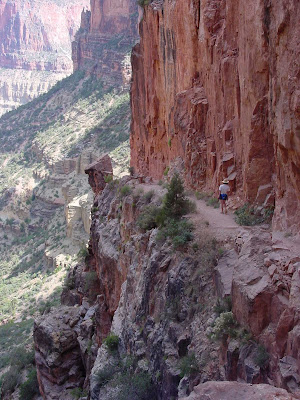 I'm avoiding the grading of the last final exam of the spring semester by dreaming of my favorite trails on the Colorado Plateau, a place I will be exploring with a select group of students in three weeks (they selected to go on the trip with me...). Today's example is what happens when one gets onto one of the most popular trails in one of the greatest national parks. The Bright Angel Trail goes from rim to rim at the Grand Canyon, a distance of about 20 miles. I know of a few crazy nuts who tried to do it in one day (one of my close friends included), but it is not recommended, especially in summertime. I've been on about 16 miles of the trail, over two trips, and it was hard enough.

I prided myself on being able to outhike nearly all my students all through my 30's and 40's, but about ten years back, I was moving up the north rim trail so slowly, and so redfaced, that my concerned students turned back down the trail, and asked "Mr. Hayes, are you going to be ok? Can we carry your pack?". The week following the trip, I bought a gym membership and started working out. The results have been up and down, but in general I am still capable of outhiking some of my students.

The secret to finding the treasures of the Bright Angel Trail is to outhike the burros. Most of the daily trips from the North Rim go to the springs about 2 or 3 miles down into the canyon. That part of the trail is dusty, full of flies, and very odoriferous. They do pay some poor soul to take a wheelbarrow down the trail, collecting "road apples". Below that point is a wonderous land. Today's picture is the passage of the North Rim part of the Redwall Limestone. I have not been on many trails that were more vertical!

The Redwall Limestone is a Mississippian-aged formation that records the presence of a shallow epicontinental sea that covered much of North America. It is full of fossils, such as brachiopods, corals, bryozoans, and numerous other creatures that inhabited the warm tropical sea. The limestone is a cliff-former that is easily visible from any point on the rim. The cliffs are generally so rugged that the location of literally all rim-to-river trails in the Grand Canyon is governed by the accessible passages of the Redwall. The Redwall is not red at all, as nearly every booklet and sign tells you, but instead is gray in most places. The surface of the cliffs are coated with iron oxide staining from the overlying Supai Group.

Another lesser known fact about the Redwall is the extensive presence of karst features in the layer. In late Mississippian time, the surface emerged above sea level, and numerous caves and sinkholes developed. Most were filled with intensely weathered red soils. A few caves (presumably much younger) are accessible for exploration, although most open into overhanging alcoves hundreds of feet from any horizontal surfaces. Grand Canyon Caverns are a tourist oriented attraction south of the park on the old Highway 66. One of the caves on Horseshoe Mesa has an access trail, and the exploration of that cave by myself in 1976 was one of the series of events that led to my becoming a geology major. Other caves were accessible to Pleistocene animals, and the dry conditions preserved many traces, including their droppings. The split twig figurines of the first human inhabitants of the region have been found in caves of the Grand Canyon.
Posted by Garry Hayes at 9:14 PM