Accretionary Wedge #8 One Heck of a Beheading! 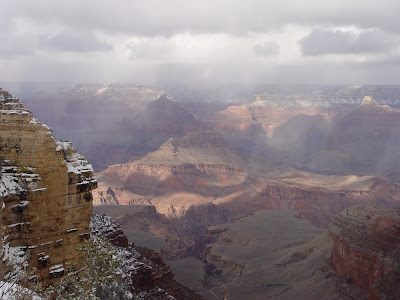 This month's Accretionary Wedge host is Julian over at Harmonic Tremors, and the theme of the month is what particular geologic event, no matter how small or large in scale, no matter how recent or ancient, is most significant to you as a scientist and an individual. As usual, I had to put a great deal of thought into the topic; and many things come to mind.

One of the final exam problems I present to my historical geology students is to devise a David Letterman style "Top Ten" list of the most significant events in the Mesozoic and Cenozoic eras, and many good answers come from that exercise, including asteroid impacts, dinosaurs and dinosaur extinctions, rise of mammals, continental break-ups, and so on (my favorite is the arrival of grass, and the effect it had on mammal evolution). These are big effects, and I enjoy discussing them, but as I approach the new Wedge topic of the month, I am thinking of a smaller event that has always intrigued me.

On the last day of 1996 and first few days of 1997, Central California was ground zero for an extraordinary meteorological event, a warm tropical storm that dumped feet of rain onto a record Sierra Nevada snowpack. The resulting floods were catastrophic, and quite simply are not likely to be experienced again (some drainages were described as having 250 - 500 year floods). My in-laws lived on the Walker River, an eastern Sierra river whose greatest historical flood had topped out at 6,000 cubic feet per second. In the 1997 flood, the river reached 12,000 cfs. Needless to say, many homes were washed away, and others (including my folk's) were damaged. The river channel was completely reshaped, and in many places a new channel had formed.

The government decided that a river should stay put, and so the Army Corps of Engineers was called in to "put the river back" where it was supposed to be, and so I got to watch over a period of weeks as the giant bulldozers prepared the old channel to have a river in it again. The big day arrived, and right there on my father-in-law's porch I was able to watch as the dozer made the cut the brought the river back into the old channel for the first time in months. It was a marvelous sight to watch the whole river change course. Of course I had no digital camera at the time, although an old-fashioned video of the event exists somewhere out there in storage.

It was a great geological event (well, geological engineering event), but it is not what I am going to talk about!

I became a geology major in the Grand Canyon. Literally IN the canyon, as I was on my first overnight geology field trip, and we spent five days below the rim, hiking the New Hance Trail down and the Grandview Trail on the way out. One of the details I remember the best is a discussion of the origin of the canyon itself. In those olden days of 1976, it was an unsolved mystery (I am glad it is all solved now...) but the most intriguing hypothesis, to me at least, was the stream piracy model. It posited that the ancestral Colorado River was flowing southeast towards the Gulf of Mexico, but that it was pirated by a "Hualapai Drainage" that worked its way east through the Kaibab Plateau by way of headward erosion. The part that intrigued me the most was to imagine the moment, the minute, that the Colorado River started to flow over that low divide that separated the two giant drainages, and the Colorado started a new channel that eventually gave us one of our greatest national treasures, the Grand Canyon. Imagining that moment, along with many others, made me curious enough to become a geologist and teacher.

So....the most important geologic event in my life happens to be one that may never have happened. But...it could have!
Posted by Garry Hayes at 8:31 PM

I have never envisioned a world without a Grand Canyon - and I'm sure glad its there. Field camp would have been considerably different without it. I guess the rock formations would be there, but some of them might not be exposed yet!