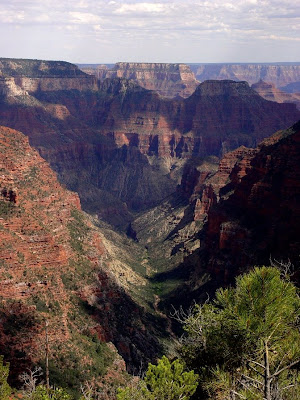 How many places are there in the world where a 3,000 foot deep canyon with walls so steep that one cannot see the bottom from the rim is an afterthought? The Transept is one of those special places on the North Rim of the Grand Canyon. It lies west of the Bright Angel Lodge on the rim, and is a large tributary to Bright Angel Canyon. You can look down into the canyon from the Transept Trail, a short stroll between the campground and the resort, or you can get a particularly spectacular view by walking about two miles out the Widforss Trail. The Widforss circles the rim of the canyon, providing the view down the gorge seen in the picture above.

The prominent cliffs in the lower part of the canyon are the Mississippian aged Redwall Limestone. The cliffs are about 500 feet high. The overlying redbeds are the Pennsylvanian-Permian beds of the Supai Group and the Hermit Shale. They are delta and floodplain deposits eroded from the Ancestral Rocky Mountains which existed at the time to the northwest in Colorado.

I had the privilege of seeing one of the last free-flying California Condors back in the 1980's in the hills north of Santa Barbara. When the population dropped to about 28 individuals, they were all captured and they started raising captive birds. As more and more of them matured, and the total number slowly rose, they began releasing the birds in the wild in a number of widely isolated locations in California, and in their old range of Arizona. A small population inhabits the North Rim at times. At the time of my last visit, I wasn't aware of the presence of these grand birds. But I did see some monstrously huge turkey buzzards flying around and finally realized that NOBODY was identifying turkey buzzards with number tags. These were condors, in range of my camera! It was a neat moment, although I kept trying to get a picture without the number tag, but getting a picture of a Condor with the Grand Canyon as a backdrop was thrilling enough. 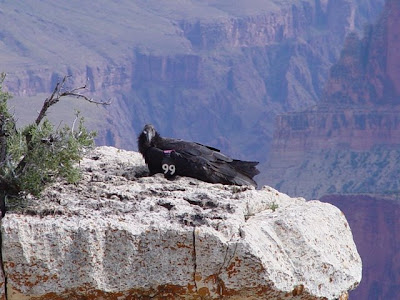