The Power of a Photograph... 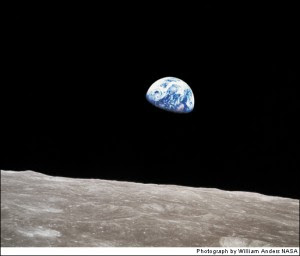 Photography is such a powerful medium. I ran across this article on 30 Photos That Changed The World. All of the pictures are emotionally powerful, especially the 1863 Mathew Brady shot of Civil War dead at Gettysburg. Most of the photos feature people, as well they should, but three stood out for their geological content: the view of the Earth rising over the moon, the shot of Buzz Aldrin walking (dancing?) on the Moon, and Ansel Adam's panorama of the Grand Tetons. 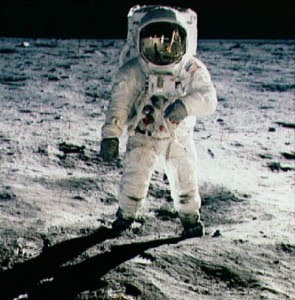 So many things happened in the late 1960's and early 1970's when I was leaving childhood. It was a scary time in many ways, and exhilarating. We worried about life being obliterated by mushroom clouds, but were coming to the realization that we could clean up some of the mess we had made of things. There was a war that was claiming the lives of friends and family, but we were learning that equality of all people was a possibility (even though we still single out groups in our society; it's a long road...). Seeing the Earth for the first time from space, though, had a huge impact on my personal life. 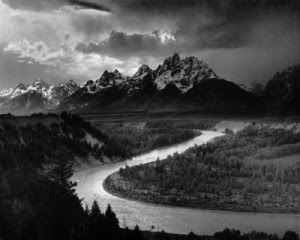 Another event of those years was the 1969 oil spill at Santa Barbara. The disaster was one of the catalysts for the first Earth Day, and led to a moratorium on new oil drilling off the coast of California that has continued for four decades. There are many issues, and it is unfortunate that opponents to the moratorium can say little more than "drill, baby, drill" as if sucking out every last bit of our remaining petroleum would make us somehow more energy independent (the reserves in the U.S. would last us not even a decade if we stopped importing oil today).
Of course, one of the arguments in support of offshore drilling is that with forty years of experience, the process is perfectly safe. It makes the events of the last few weeks all the more heartbreaking. There is an arrogance that accompanies a dependence on a particular technology. We see it with nuclear power as well. When they go wrong, what happens next? We made a choice in the 1980's to pretend that oil would last forever, and the U.S. made no serious efforts for two decades to increase mileage standards or build alternate forms of transportation. So we are forced to import even more oil, or drill for oil in ever more dangerous and unstable environments.
What is the power of a picture? 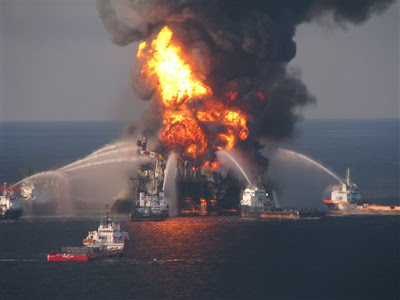 I really wonder if the "drill, baby, drill" crowd has any sense of introspection at all. Did any of them stop for a minute and wonder if this really the best way forward, before calling for increased drilling? Does an image like this carry the power to overcome apathy and willful ignorance about our vulnerability to energy disruptions? We are running out of time and choices.
Update: Devilstower has some similar sentiments...
Update #2: Famed Oceanographer and Marine Fisheries expert Rush Limbaugh checks in about the oil slick threatening the southern states: ""The ocean will take care of this on its own if it was left alone and left out there. It's natural. It's as natural as the ocean water is." He also is pretty sure environmentalists blew up the oil rig.
Update #3: On the other hand, here is what a real petroleum geologist has to say, Rachel at 4 1/2 billion years of wonder (thanks to Jules and Rachel for their comments!).
Posted by Garry Hayes at 9:55 PM

The mindless platitude of "drill, baby, drill" comes from the infantile,irresponsible purveyers of polarization and denialism(Palin, Beck, Limbaugh and associated ilk) who willfully reject introspection and learning about the complexity and interconnection of all life. They take pride in their insularity from ecological and biological reality and see only shades of black and white, winners and losers, power and domination.

Their pernicious ideas are like a cancer that is eating away at what is left of community, unselfishness and concern for "real values" in this country and elsewhere. That so many are entranced by such vapid appeals to the lowest common denominator is truly depressing.

Sometimes I think we are immersed in the "age of stupid". We are willingly destroying the very fabric of life that made it possible for our evolution and existence. We are wiping out the rich biodiversity that took millons of years to produce for the short term excesses and mindless amusements. Our current joy ride will not last through this century. And what will we leave for future generations to ponder and reflect if we don't grow-up? A planet of ugliness and deprivation all caused by our lack of self-discipline, wisdom and short-sighted economic greed.

It's not that humans are a cancer upon nature or evil because of some nonsencial original sin, it's that we are so pre-occupied with self-absorbed individualism, we reject or forget the necessity for holistic thinking about context, that all of life is mutually interconnected and everything we do has consequences...nothing is done in isolation.

Cooperation and community is what brought us together and made it possible for civilization to persist and prosper, not the infantile "it's all about me" Ayn Rand fantasies or ruthless and mindless competition.

God, I am just so upset about all of this that I can barely put two words together, though I've attempted a post at my own blog.

I can't even think about Limbaugh (that fascist gasbag) opening his mouth without feeling the urge to punch something.

I kind of hope that this disaster will make people wake up, but then I watched Rachel Maddow from a couple nights ago and she did a piece about the crap politicians have been saying about oil spills since day one. Now I just feel depressed.

Thanks Rachael for the frank and open facts on your blog about the reality of our situation. How refreshing that it comes from someone inside the industry. Not that using oil is evil... it's many uses has given us a lot to be grateful for, but it's time to face the reality that we are going to have to develop alternatives and practice much more conservation and efficency.

Document Redlining said...
This comment has been removed by a blog administrator.
May 7, 2010 at 2:44 AM