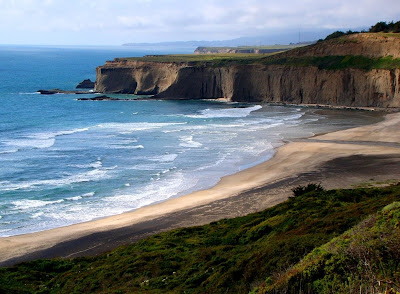 I can't really call this post part of the "Other California", because that series concentrates on geologically interesting places in unfamiliar corners of the state. My trip today was to the shoreline at Half Moon Bay along one of the four or five star resort complexes that costs hundreds of dollars a night and appears on lots of postcards. Note that I was not staying at said resort: I'm a teacher, after all, on a teacher's salary. But one very nice thing about California is that the shoreline belongs to everyone, and so despite that rich trappings, anyone can stroll along the beautiful cliffs and beaches. 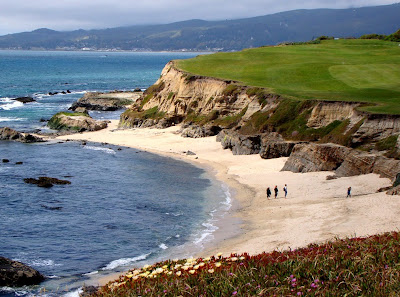 Wave-cut cliffs abound along this section of the coast, due to tectonic uplift and deformation along nearby faults, including the San Andreas and San Gregorio. The rocks exposed in the cliffs tell a complex story of deformation of this block of crust, including granite rocks of the Sierra Nevada that have been displaced at least 200 miles northward, and seafloor sediments folded and lifted above sea level (check out this 2001 NAGT field guide, published by the USGS for some details). 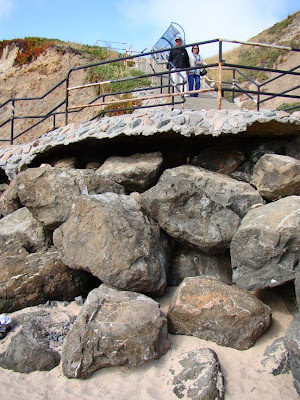 Evidence of vigorous wave erosion is evident not just in the fresh seacliffs, but also in human developments close to the edge of the interface between water and land. The stairwell above has been undercut by powerful winter waves, and has been reinforced with the large boulders called riprap. The boulders absorb the force of waves, slowing down the water and preventing it from washing the softer sediments of the cliff away. The road below is probably not long for this world. I've been at a restaurant here in winter and seen water was splashing on the windows facing the beach. 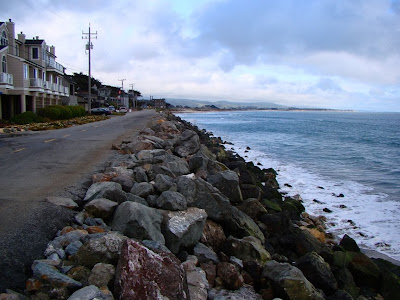 The fun of the central coast of California is the diversity of landscapes. Not five miles from the beach we found a beautiful quiet redwood forest at Purisima Creek Reserve. The reserve has 24 miles of trails in a second-growth forest. Most of the older trees were logged in the early 1900's, but the evidence is nearly buried away in the rich undergrowth. The park was established with the help of the Save-The-Redwoods League. It was a nice place to end the day. 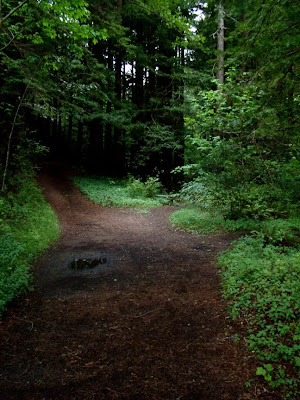 I love that part of the coast with the redwood forests nearby. Nice place to relax and enjoy the...geology.

I'm envious - I've driven past Half Moon Bay, but never had the chance to stop. In spite of that, it figured in a post I wrote a year ago -

and I contributed a short piece to the local news site, Montara Fog:

I'll have to stop next time!

That upper picture of the cliffs near Half Moon Bay is one of my favorite places. I have made jokes that it is a place to make a tough Giant Stride Scuba Entry. Really, if you are bored, you might like my take on the area at http://www.diver.net/seahunt/SanMAteoCoast/SanMateoCoast.htm. It is such a beautiful place.