Three Roads Diverged...but why? Because there's a huge landslide, that's why... 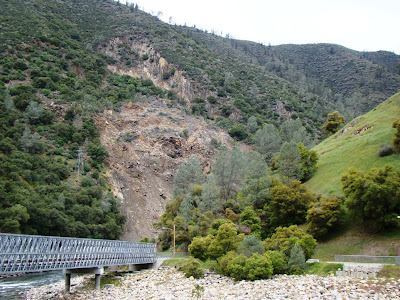 It didn't take Ron Schott long to reveal why three roads diverged in the wood, the subject of yesterday's post on Highway 41 heading into Yosemite National Park. The Ferguson Slide was a problem child for CalTrans and road management crews for many years. The orientation of the river and the dip of the metamorphic rocks on the high ridge conspired with the undercutting effect of roadbuilding to destabilize the slope above the highway (you can see some of the slide activity in this video). The slide permanently covered the highway, and the first temporary bridge did not allow larger vehicles to make the 90 degree turn. Bus tours are the life-blood of the local economy, so the current bridge crosses the river at an angle so longer vehicles can cross safely. I blogged about the slide last year, when I compared the Ferguson slide to a different kind of mass wasting event just inside the park boundaries.

The fix is still temporary, with only a single lane available, so delays are common while cars wait at both ends. A more permanent solution is the subject of extensive studies, which can be reviewed here. 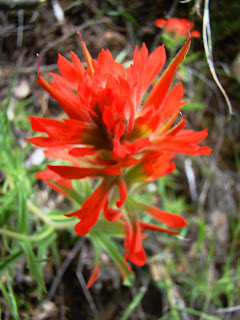 We had to wait at the slide both coming and going home from Yosemite yesterday, so I was able to hop out and photograph a couple of the emerging springtime wildflowers. It was cold and dreary, so most flowers weren't doing much (it had actually snowed the previous day), but a few Indian Paintbrush flowers were visible, and the redbuds were spectacular all up and down the Merced River Canyon. I really want to head back up in the next week or so, and see the poppies and fiddlenecks mantling the high slopes. 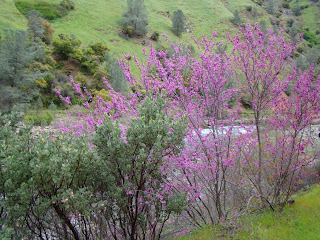 But, you ask, how was Yosemite? Spectacular in a different way. Coming up in a future post!
Posted by Garry Hayes at 5:55 PM