Only a Little Planet... 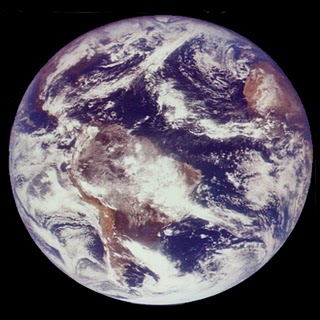 I'm kind of hesitant about writing about Earth Day, 2012. There are many things I could talk about concerning our occupancy on planet Earth and what we a doing to ourselves and the ecosystem to which we belong. But I feel a certain sense of hopelessness, like I am trapped in a bus hurtling towards an abyss, and I am not in the driver's seat. In fact I am sitting way in the back, and no one seated up front is aware of what is happening. They're not paying attention, and wouldn't believe their peril if they were. The drivers of the bus have different priorities. I don't know if it is ignorance, or recklessness, but they are driving ever faster and faster, sure in themselves that they can make the turn before going over the edge.

The original Earth Day in 1970 caught businesses and politicians off-guard. Before they knew what was happening, Congress much to their own surprise had passed the Clean Air and Clean Water Acts, and formed the Environmental Protection Agency. They passed the Endangered Species Act. And it made a difference. Our air and water are cleaner, despite vast numbers of more people and cars on the road. Dams and power plants and other mass developments have to consider their affect on the environment before they can proceed. It made a difference, and the enemies of this progress have been counter-attacking with a vengeance.

Today, we face some of the greatest challenges ever faced by our species: the deeply intertwined problems of energy use and global climate change. Unfortunately, instead of facing the crisis head on, we instead have to listen to politicians deny the very existence of a problem. Despite the clear record of sea level rise, loss of glaciers worldwide, and direct measurements of worldwide temperatures, the politicians listen to their corporate lobbyists who pay for their re-election campaigns and then impugn the motives of climate scientists and environmental groups. The Supreme Court is complicit in this, with their recent Citizens United ruling that allows unlimited donations by corporations to political candidates. Our politicians represent their corporate sponsors, not their constituents.

We don't have many tools to fight back with. There is education, but political support for education is also disappearing. For all their words about competing in a global economy, politicians are letting our universities, colleges and high schools wither on the vine.

We still have the right to vote, but politicians are attempting to restrict that right to those who will vote they way the politicians want. Not enough people vote these days anyway, and many who do are "low-information" voters who are ignorant of the issues, and are easily swayed by sophisticated and well funded media campaigns.

So here I am, a blogger with a few hundred readers, and a teacher with a few hundred students each year. Did I say hopeless? Yeah, that's the way I feel sometimes. But I also know that education is a powerful tool, and I have to believe that politicians can only deny what is happening right before their eyes for so long (and then when the predicted catastrophes occur, they will say "no one could have foreseen this"). And change will come.

I wish the change wouldn't be wrenching. I wish it could be planned and carried out in a way that upholds human dignity and doesn't result in suffering, starvation and permanent economic depression. We will have to leave petroleum and fossil fuels behind, and embrace renewable energy if our standard of living is to continue as it is now, if there is to be an economic future for the children being born today, and if there is to be a healthy ecosystem on our planet. There is still time to plan, if the politicians would learn from someone besides their corporate sponsors.

Education is definitely the key to the future health of the planet we call home.

I am also convinced that, although we may destroy ourselves, Mother Earth will ultimately endure.

Agree with you and Nina.

It's time to talk more about climate change.

Garry, you mentioned feeling a sense of helplessness, and I can certainly understand that.

But over-all, I feel cautiously optimistic about the future. This weekend, to celebrate Earth Day, I took my son and his Cub Scout pack to Cabrillo Beach for a beach clean-up. The boys joined a couple hundred other volunteers in cleaning the beach.

There was plenty of trash -- but not as much as there could have been. Offshore we could see dolphins, swimming just outside of the Port of Los Angeles -- forty years ago, on the first Earth Day, the port was polluted to a disgusting degree.

We still have a long way to go, but I see things slowly improving. The most important thing we can do this year is to vote! We need to vote for politicians who can observe and respond to reality!

I am not convinced Americans wish to save the planet. I just read where China sees the potential (economic) value of green energy and I think they could be at the forefront soon while we just keep thinking about it and our politicians have other concerns.
Sam Ciurca