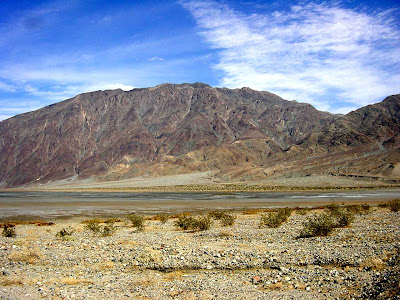 Strangers in a strange land is my latest blog series, dealing with the geology of one of California's most unique environments, the Basin and Range Province and the Mojave Desert. I visited both in the last few months, and I have been inviting the readers of this blog to learn the basic principles of geology through the eyes of my community college students. The last few posts have concerned the nature of faulting. Sixty years ago, as far as anyone was concerned, there were essentially four kinds of faults, left and right lateral, normal and reverse. There was a variation of a reverse fault, one with a low angle plane of movement called a thrust. Thrusts result from compressional forces, and are commonly seen the Appalachians, the Alps and the Himalayas, all of which are produced at convergent plate boundaries. 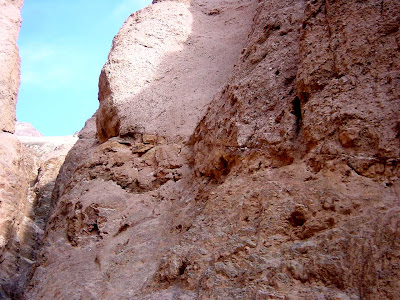 Thrust faults generally push older rocks over younger rocks, and a number of Mesozoic-aged thrust faults are found in the mountains of Death Valley. Levi Noble, one of the first geologists to map Death Valley, found many of them. As noted in the last post, he also found a series of unusual "thrusts" that were distinguished by having younger rock on top of older sequences. A nearly horizontal young rock-on-old rock fault can be seen crossing the middle of the photo above.

Another geologist, H. D. Curry, who worked the region in the late 1930s noticed some very strange structures in the Black Mountains on the east side of Death Valley. He called the huge dome-like mountains turtleback faults. That's the Copper Canyon turtleback in the picture at the top of this post. The turtlebacks (there are three obvious ones in the Black Mountains, and a number of somewhat cryptic ones scattered through other mountain ranges across the region) are made of ancient Proterozoic-aged metamorphic rock, and their surfaces are fault planes. When rocks are found above the fault planes, they are invariably younger. The enigmatic young-on-old 'thrusts' and turtlebacks seemed to be closely related.

Other geologists started to question the idea that these faults were compressional. Even though Noble was initially sure that the faults were thrusts, over the years he began to accept that his first perceptions might possibly be invalid. The 'thrusts" were associated with numerous normal faults, and it was known by then that the Basin and Range province was produced by extensional forces in middle and late Cenozoic time. Finding the odd exception to the rule is not unusual, but by the 1970s, geologists were finding these enigmatic fault systems all across the Basin and Range province. As they realized the extensional nature of these faults, they knew they had discovered a counterpart to the compressional thrust faults. These low-angle normal faults were soon being called detachment faults, and the dome-like systems of ancient metamorphic rocks were termed metamorphic core complexes. 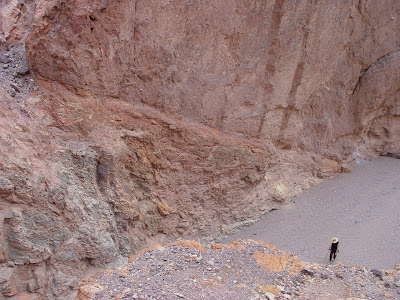 The picture above shows the exposure of the Badwater Turtleback where it plunges into the subsurface in the canyon above Natural Bridge in the central part of Death Valley. It is an astounding feeling to lay one's hands on the surface between young volcanic rocks and the ancient rock from deep in the continental crust. Recognition that these structures were an entirely new kind of fault zone did not provide answers to all of the questions raised by their discovery. The nature of detachments and metamorphic core complexes is still a field of ongoing research and controversy. 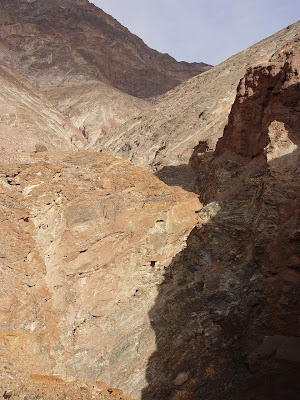 The exact nature of the turtlebacks in Death Valley is not a settled issue. Are the turtlebacks like the other core complexes, or are they a more unique local phenomena involving steeper normal faults? You can check out this report by Miller and Pavlis for a review of the issues involved, or pick up the excellent guide to the geology of Death Valley by Miller and Wright.

When one stands on the top of the Black Mountains and looks across the incredible Death Valley graben to the Panamint Mountains on the far side, one can barely comprehend the implication of the discovery of detachment faulting and metamorphic core complexes. The Panamints were once on top of the Black Mountains, or nearly so. And only a short time ago in the geologic sense, just a few million years before the present. 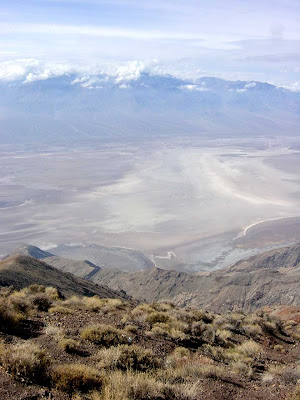 I remember touching some gneiss rock at the head of the canyon above Natural Bridge.

Thank you, Gary! I just graduated with an MS in geology, and despite detachment faults and metamorphic core complexes being discussed in both undergraduate and graduate structural geology, AND observation in the field, the concept never really made sense to me... until now. (To be fair, structure was hands down my worst subject. But still...)