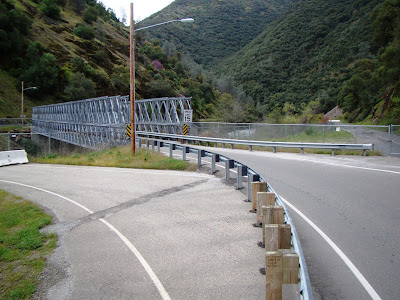 Three roads diverged in a green wood,
And sorry I could not travel all three
And be one traveler, long I stood
And looked down one as far as I could
To where it bent in the growth of trees;

Then took the other, as just as fair,
And having perhaps the better day,
Because it was grassy and wanted wear;
Though as for us the passing there
wouldn't be, for the fence that blocked our way;

And number three that morning lay
Betwixt a river cold and black.
I kept the second for another day!
And the third, there was no way,
I doubted if I should ever come back. 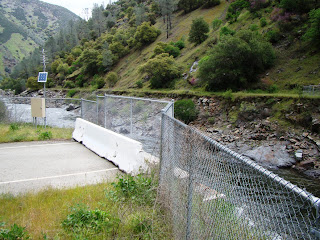 I shall be telling this with a sigh
Somewhere ages and ages hence:
Three roads diverged in a wood, and I—
I took the one most travelled by,
And that has made all the difference.

Three roads that once led to the same destination. Why did we take the middle? Highway 140 on the way to Yosemite.
Posted by Garry Hayes at 11:45 PM

Well, the short answer is that you took the middle because it is currently the only passable all-weather choice if you want to get from Merced, CA to Yosemite Valley.

But of course that begs the question: Why are the other two impassible? Prior to 2006 you would have remained on the left bank of the Merced River for the entire length of the Central Yosemite Highway. However, when the Ferguson Rockslide blocked that route, the state of California hastily installed a pair of Bailey Bridges that went more or less directly across the river (shortest span), but limited traffic to vehicles under 28 feet long (due to the sharp curves entering and exiting the Bailey Bridges. This is the paved road that ends at the Jersey Barrier and fence at the riverbank. Later, the State of California installed the two new longer-span Bailey Bridges that crossed the river diagonally and allowed longer loads to travel this critical passage. That new set of Bailey Bridges now represents the central path and the only all-weather connection to the Incomparable Valley.

Here's a GigaPan of the Ferguson Rockslide.

Wow Ron! I knew that answer but never could have explained it so clearly. Great job.

I took the one less traveled by