Strangers in a Strange Land: Even the stones have minds of their own... 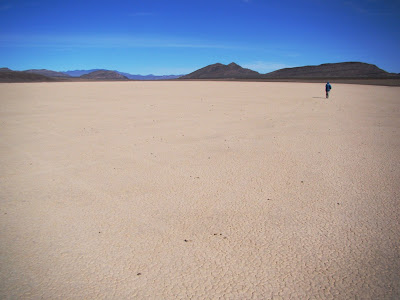 Death Valley is the very epitome of (easily visited) remoteness and loneliness. There are outposts of civilization at Furnace Creek, Stovepipe Wells, and Scotty's Castle, but the rest of the park is a vast wilderness with only a few roads, paved or otherwise. I've called this blog series "Strangers in a Strange Land" because most humans are strangers here, and it seems like almost everything about this landscape is truly strange. One of those strange landscapes are playa surfaces. I previously talked about the Death Valley salt pan, one aspect of an interior drainage desert, but there are many other "lakes" in the park which never collected much in the way of salt. They have smaller drainage basins, and no river systems fed into them, so the most common mineral on the floor of these playas is fine-grained clay. They will occasionally have water following flash flood events, but most of the time they are dry, and the clay breaks up into millions of small, mostly hexagonal mudcracks. 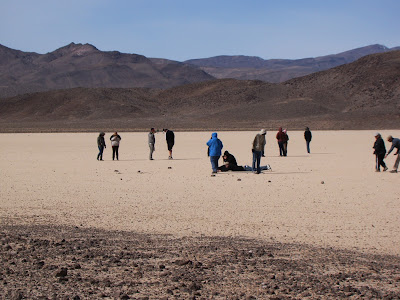 Pure clay makes for poor soils, and plants do not grow on the playas. So...no plants, few animals or insects, no particularly interesting minerals. Why are these students so fascinated with the surface of the playa? Well, there is one thing on this playa that seems "alive"...it's the rocks. They've been moving around... 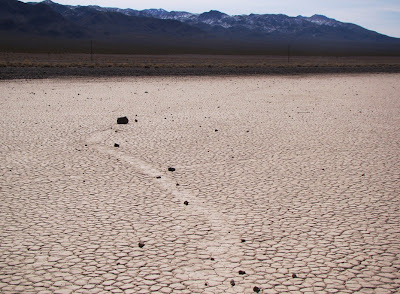 It's strange for large pebbles and small boulders to be on the playa in the first place if you think about it. Playas are the tail end of a flash flood sequence. There might be a mudflow careening down a desert drainage, tearing at the cliffs and carrying large rock fragments. But then the flood reaches the alluvial fans on the flanks of the mountains, and with the gentler slopes, the flood slows and the larger fragments drop out. The only sediment that usually reaches the playa surface is a brown slush containing only suspended clay particles. Sometimes there are rock outcrops found within the playa or along the margins, so the rocks can be easily explained. But how are they leaving behind trails? 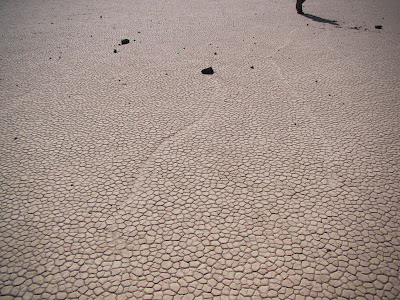 By now, readers familiar with Death Valley are thinking that we are visiting Racetrack Playa in Death Valley National Park, but we aren't. Although the Racetrack is justly famous for the number and size of its moving stones, it turns out that moving stones can be found in at least eight other places across the Basin and Range Province in Nevada and California. I haven't been to the Racetrack yet (it is at the end of a 25 mile long gravel road), but I have seen the phenomenon at two other places: along Highway 50 on the Carson Sink in Nevada, and on this playa that we visited in February, Bonnie Claire, just outside of Death Valley National Park.

So, how is it that they move? If you are looking for a definitive answer, I am sorry, I don't actually know. No one truly does, because no one has ever seen it happen. I think we can safely dismiss stories of aliens playing jokes, elves, and pixies, and of strange magnetic forces. The stones lie on exceedingly flat surfaces, so gravity sliding is probably not involved. It seems that only one force exists in the Death Valley region that can account for the movement of these rocks: the wind. 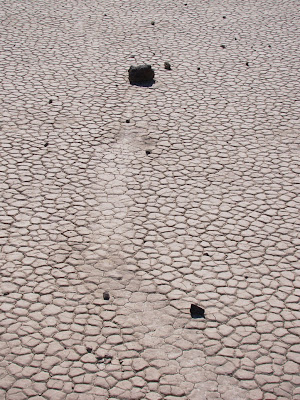 Wind seems a real stretch. Even first-time geology students know that wind normally can only move sand and dust particles. It would take extraordinary conditions for wind to be able to push rocks that weigh many pounds. Yet it happens. Extremely high winds are not unusual in the Death Valley region, especially during and after winter storms. Studies are ongoing as to whether wet saturated clay is slick enough to allow for the movement of stones in such winds.

There may be another important factor. The playas where the rocks move are at higher elevations where freezing temperatures are common. If enough rain has fallen, water may cover the playas and freeze around stones sitting on the playa surface. It is suggested that broken sheets of ice around the stones can act as sails, helping push the rocks along. This idea is supported by rock trails that move in tandem, as if the rocks were physically connected. This explanation works for me, but additional testing of some of the rocks shows that ice cannot completely explain the movement (researchers put stakes around some stones, and they moved out, passing through spaces barely bigger than the stones themselves).

So the moving stones are still a bit of a mystery. One of these times, someone is going to brave a horrific windstorm and will be standing there with a camera when the stones are moving about. At that time we will be able to see the elves themselves pushing the rocks along! 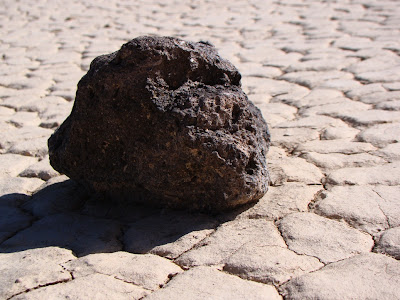 Ron Schott has allowed me to post some of his photographs taken at Racetrack Playa in Death Valley National Park. The first is a gigapan 360 degree view of the playa (click on the image below to see how gigapans work; it's pretty amazing). More gigapans of Racetrack and other parts of Death Valley can be found here: http://www.gigapan.com/gigapans?gallery_id=7940&order=most_popular&page=2&per_page=10

More of his shots can be found on his Flicker page at http://www.flickr.com/photos/rschott/tags/racetrackvalley/

A final note: if you visit Racetrack or any of the other moving stone sites, please leave the stones alone. They are mysterious, but not mystical. They are normal run-of-the-mill rocks with no unusual properties other than being on a playa, and the position of each stone is recorded with GPS. Stealing the rocks (and that is what you would be doing) will screw up years of research. You will also take from the enjoyment from other visitors.
Posted by Garry Hayes at 9:27 PM

Not only do the Devil's Racetrack rocks have recorded GPS coordinates, they also have women's names. Whatever.

And they call the wind Maria!

(you have to be my age to remember "Paint Your Wagon")