Not Seeing the San Andreas Fault in the Bay Area...

The San Andreas fault is a major transform boundary that runs through much of California, and it is justly famous for damaging earthquakes, including the 1906 San Francisco, the 1857 Fort Tejon, and the 1989 Loma Prieta events. As I've noted many times on this blog, it is not the only fault in the state, but it is the best known. 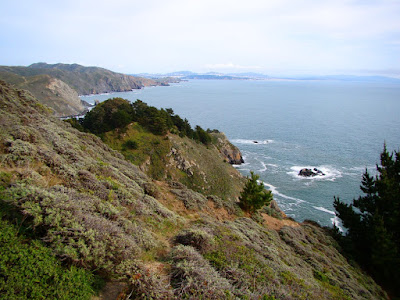 It's one thing to know the name of a fault, and quite another to know important facts about the fault, such as quake probability, potential quake magnitudes, and...where it actually is. The fault is not too hard to find south of San Francisco. The fault stays on land all the way to the Salton Sea region hundreds of miles to the south. North, though, the fault runs offshore, then briefly onshore, then offshore again. When it is onshore, the trace is often obscured at ground level because of thick vegetation, but the general location is usually easy to find on Google Earth and aerial photographs because of the straight linear valleys that tend to form along the fault system.

I was in the north bay over the weekend for purposes other than geology, believe it or not. But as I went through my photographs, I realized that I took a fair number of pictures of the San Andreas fault, except that it was invisible, being underwater and all.  In the picture at the top of the post, we are standing at Muir Beach Overlook on the Marin Peninsula. If you click on the photo for the larger version, you can pick out Lands End and the residential buildings of San Francisco on the upper right part of the picture. The fault goes offshore out there, along the coast at Pacifica, and runs parallel to the coast to the right of the shot. 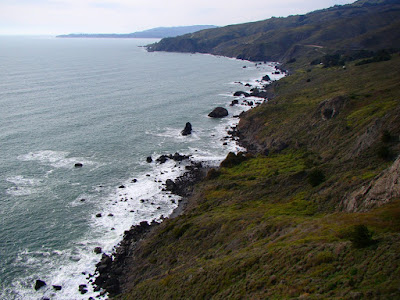 Looking the other way (northwest) from Muir Beach Overlook, we can see Bolinas and Point Reyes Peninsula. Both localities are on the Pacific side of the San Andreas fault. We drove north on Highway 1 to have a closer look at where the fault comes inland again. 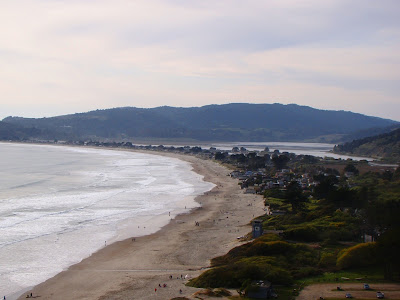 Wave action along the coast at Bolinas has produced a long baymouth bar that forms Bolinas Lagoon. One of those expensive homes, out on the left end, has a major plate boundary running through the living room. It will be an interesting day in that house when a large 1906-style quake hits. 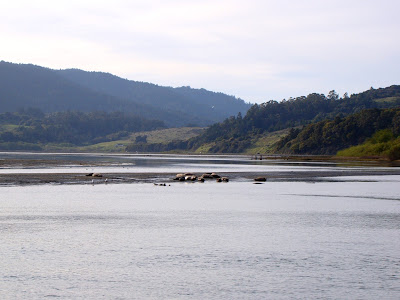 Harbor seals use the mudflats inside Bolinas Lagoon to rest and to keep their pups safe. The San Andreas comes on land at the north end of the lagoon in the center of the picture above. It runs for thirteen miles to Point Reyes Station, and disappears underwater again at Tomales Bay. Offsets resulting from the 1906 earthquake reached the greatest length in this area, around 19-20 feet. The epicenter was close to here. 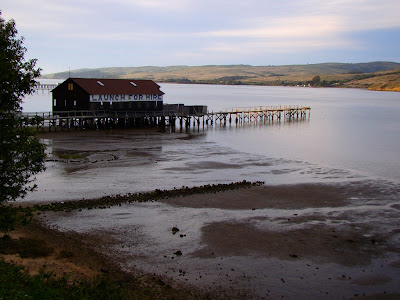 Tomales Bay is a unique feature of the California coast line. With a length of 15 miles and an average width of 1 mile, one might have thought that it would have been utilized as one of the rare natural harbors in the state. The bay is exceedingly shallow, however, with an average depth of only 15 feet, and it has a treacherous sand bar at the entrance. It is essentially a linear river valley that was submerged as sea level rose after the last ice age receded around 13,000 years ago. The San Andreas runs right down the middle. 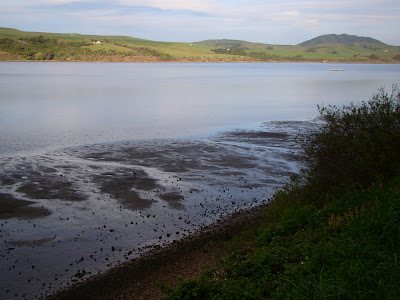 It was a beautiful afternoon as we drove along the west side of the bay through Inverness and then south to Olema. If you really want to see the San Andreas fault for real, you need to stop in at the visitor center at Point Reyes National Seashore, where there is an "Earthquake Trail", and blue posts mark the precise trace of the 1906 break. 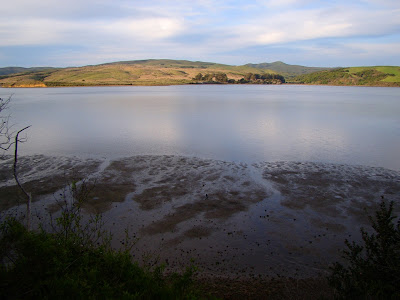 We found a delightful restaurant for dinner, the Farm House Restaurant. I was amused that they advertise their location "one half mile from the 1906 epicenter", and kind of wonder about that as a selling point. But the service was good, and the food delicious, especially the clam chowder. 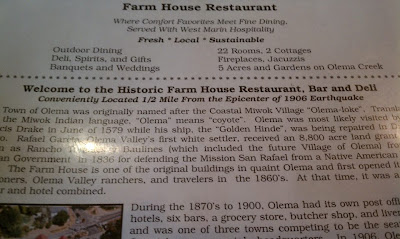 For an overview of the region, check out the Google Earth images below, with the location of the San Andreas fault marked on the second. It is a beautiful region, even if the fault isn't always visible! Click on the photos for a larger version. 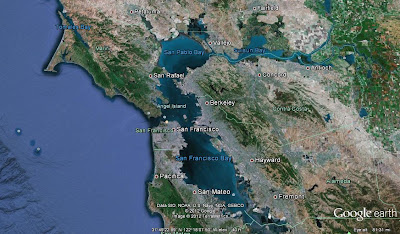 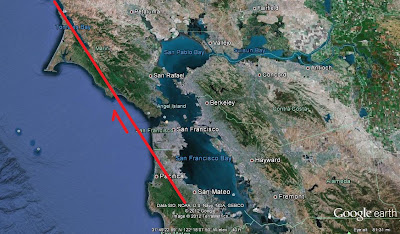 I love Point Reyes. I drove all the way from southern Utah last winter to (among other geologic activities) walk on the Earthquake Trail.
Very interesting and scenic area.

So nice to be familiar with the locations in your images!

I was in the area in 2009 and loved every bit of it. I would have enjoyed it more had I previously researched about the path of the fault...oh well...another reason to repeat my visit!
Regards from Barcelona
Alexis