Strangers in a Strange Land: Salt and the end of all things 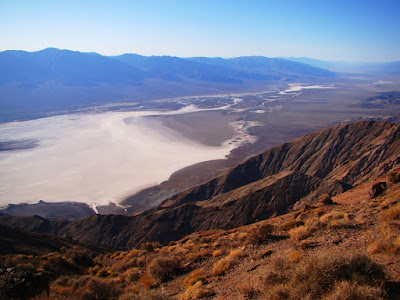 In February and March I made a series of trips to the Mojave Desert and Death Valley, and since then I have been conducting a blog journey through the basic principles of geology as exposed in this extraordinary desert environment (Strangers in a Strange Land). In the last post we were looking up at the Black Mountains and the strange Turtleback faults, but today we are looking down, down as far as we can look on the North American continent. We have reached Badwater and the salt pan of Death Valley.

The end of all things? Strange topic I suppose, but I have been watching Frozen Planet on the Discovery Channel over the last few weeks, and it has had an emotional impact. Not so much the cute animals and the little dramas of survival against their predators and so on. That gets to be manipulative after a while and loses impact with me. It was more watching the Emperor Penguins, and their struggle to survive as the last year-round non-flying vertebrate life form on the continent of Antarctica (Oh, except for this...).

Antarctica was once a lush forested continent. It once teemed with life, with dinosaurs that wandered through the trees and swamps, along with birds, amphibians, and later on, marsupial mammals. Antarctica was in fact the bridge by which ancient marsupials reached Australia for the first time, where they thrived.

But life in Antarctica was doomed. As long as the continent was still connected to the other southern continents, warm ocean currents kept the landmass temperate enough to hold back the formation of glaciers. But sometime in the early Cenozoic era, around 50 million years or so, the last connections to the other continents were severed. Antarctica was isolated, not just by water, but by cold ocean currents that surrounded the continent. The glaciers grew larger and larger, turning into ice sheets thousands of feet thick. As more and more land disappeared, animal and plant species disappeared, unable to adapt to the new frigid conditions.The thread of life frayed to the point of snapping.
﻿ Except for those penguins. Somehow, they have continued to survive, adapting their reproductive habits to the seasonal patterns, standing their ground through the harsh winters, standing for months on end with an egg, and later a chick between their legs. The parents don't eat for months at a time, trading parental duties while their mates chase fish many miles away. They stand, literally, at the edge of survival in the harshest land imaginable on this planet.

What do these musings have to do with Death Valley? The "end of all things" can be interpreted any number of ways, and here, the extremes run the opposite direction. Death Valley is the product of the disruption of the Earth's crust, a disruption so complete that no river drainages in the province will ever reach the sea. Death Valley is the sump, the low place to which all waters flow, on the surface and underground. It is the end of rivers. And Death Valley is, like Antarctica, a place where animal and plant life face insurmountable challenges. Out on the salt flats life ends.

Death Valley was a pleasant environment once upon a time. During the Ice Ages, which dominated much of the last two million years (equaling about half the time that the Death Valley graben has existed), the valley collected glacial meltwater, and thus was a freshwater lake. The surrounding mountains were still semi-arid, but forests of juniper and other trees extended to the shores of the lakes, along with extensive grasslands. A diverse ecosystem thrived; mammoths, mastodons, horses, camels, antelope grazed here, and were hunted by carnivores like sabertooth cats, American lions, and wolves. At some point in time, a connection was made with the Colorado River drainage or some other river system now lost to us. So there were fish in the lakes.
But things changed. Around 11,000 or 12,000 years ago the latest stage of the ice ages, the Tioga, ended. The rivers shrank to a trickle and gave out. The vast lake in Death Valley, over 100 miles long, and 600 feet deep, evaporated bit by bit, and with each dry season the salt content climbed. Finally, the last of the water left, and a vast salt flat was created. The desert baked in the summer sun. 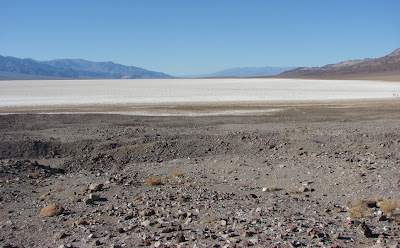 Some animals migrated elsewhere, and but most went extinct. Bighorn sheep and coyotes are the largest animals still found anywhere in the region, but you won't find them here on the salt pan. It is one of the most sterile environments on the planet (the biologists will have to let me know if bacteria can thrive in a pure salt environment like this). And what of the fish?

As pointed out before, Death Valley was the sump where all the regional water collected. It still is. The surface water is wildly inconsistent, but springs tap into underground reservoirs, and they flow on a year-round basis, and have been doing so since the last of the freshwater lakes dried up. A precious few species of fish took refuge in these springs and survive to the present day. In Death Valley the survivors are the pupfish (Cyprinodon). Like their penguin counterparts in the southern hemisphere, they survive in some of the harshest climates in the world. Some of the Death Valley species persist in water that reaches 100 degrees, and salinity that is three times that of seawater.

The most endangered species is the Devils Hole Pupfish. The entire population occupies a single cavern opening in Ash Meadows just east of Death Valley. The population has hardly ever exceeded 300 individuals, but it sometimes dips to only two or three dozen. As if the 92 degree water and the precarious food supply (a ledge of algae covered rock) isn't enough, they sometimes have to put up with the bizarre effects of distant earthquakes (check out this video). But through it all the pupfish have found a way to adapt survive.
Death Valley is the hottest and one of the driest places on the planet. And the climate is warming. What changes are in store? It is hard to know. But I have a feeling that the rare years when the Amargosa River flows all the way to the valley floor will become all the rarer. 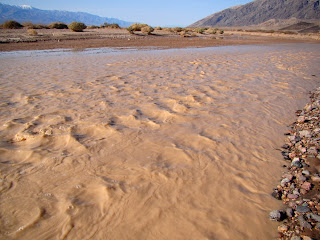 It will not be so often that we can see a six-inch deep lake on the floor of Death Valley, and imagine how it once was... 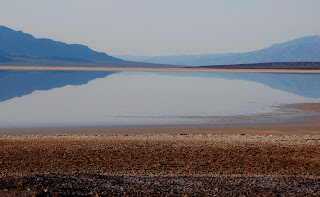 Keep your head up Geotripper. This storm too shall pass and a return to sanity will prevail thanks to efforts like yours to educate the world. I have faith in the next generation of students.