A Fix of Chlorophyll: A day at Muir Woods 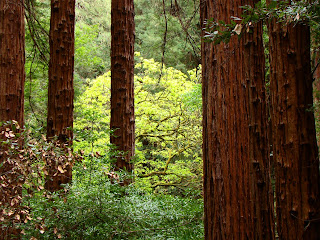 I'm really a desert rat at heart, and as a geology-type of person, I love the rock exposures afforded by extreme aridity. But once in a while, I get a real hankering for moist air and chlorophyll, even if it means I can't see many rocks. One of the places I can go when I feel that way is Muir Woods National Monument on the Marin Peninsula north of San Francisco. 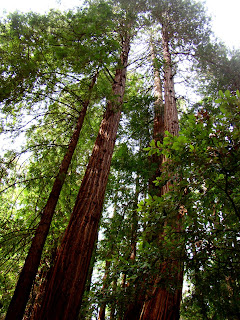 Muir Woods is a patch of old-growth Redwood Forest. That it exists at all is a minor miracle, given the proximity of the monument to San Francisco, and the fact that 95% or more of all the old growth redwoods in California have been logged over the last century. It is one of the most heavily visited national monuments in the country, with a million visitors each year, with most of them packed into the small valley running through the middle of the park. 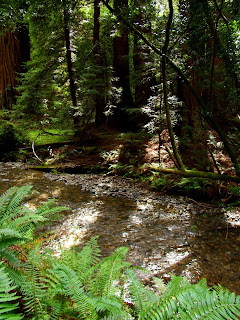 The park also preserves one of the few creeks in California that has not been dammed or otherwise altered, so that it has a population of endangered Coho salmon and Steelhead salmon. We couldn't see any, but there were probably fingerlings swimming downstream to the Pacific Ocean in the high spring runoff. 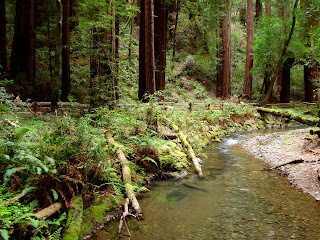 The biggest trees in the monument are well over 200 feet tall, although they don't approach the size of the true giants farther north. Some in Redwood National Park top out at just short of 400 feet! Needless to say (but I can't help myself), walking beneath these giants is awe-inspiring. It becomes even more incredible to realize that these giants have such an ancient lineage. They were present across the northern hemisphere in Mesozoic time. Dinosaurs once walked among trees very much like these. The trees of Petrified Forest National Park are related. 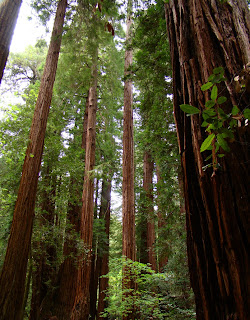 And now they are only found along the Coast Ranges in Northern California (and a little bit of Oregon). And their future is uncertain. Besides having been mostly cut down, their very environment is threatened by global warming. The fogs that sustain these trees during the summer dry season are becoming less prevalent. New seedlings will not find conditions amenable to healthy growth.

But the trees are here today, and we have had the foresight to preserve at least part of their ecosystem. I had to remind myself to look down once in a while and see the undergrowth. There were some pretty flowers, including a lot of Redwood Sorrels (below). 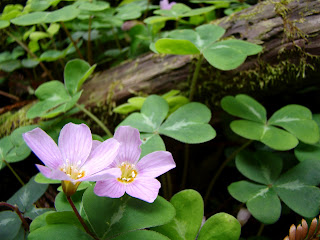 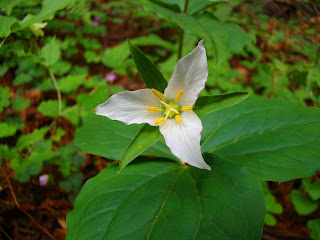 And a small delicate flower I am guessing is a Claytonia perfoliata, or Miner's Lettuce.  From what I read, forty-niners ate the plant as a source of vitamin C. 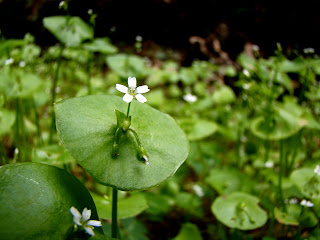 All in all, a nice way to spend the day. Of course, we couldn't just leave the geology totally out of it. Later in the afternoon we headed out to see the San Andreas fault, but that will be the subject of a later post.
Posted by Garry Hayes at 2:08 AM

A nice shady change of pace from the desert. And miner's lettuce is delicious.

Hey Gary, I really like reading your blog. Thanks for sharing knowledge. The photos also really nice to see