Spring in the Sierra Nevada Foothills, A First Report (and a baby horsie) 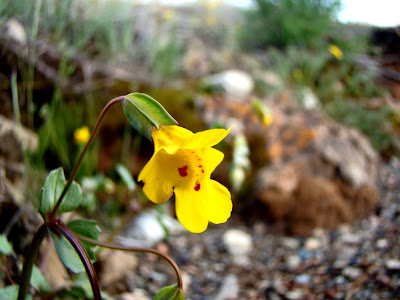 It was the first day of April, and we decided to take a drive in the Mother Lode, the gold mining region that makes up the foothills of the Sierra Nevada. We weren't really expecting much in the wildflower department, as it has been a horrendously dry year, and the hills were still brown just a few weeks ago. March brought us a few serious storms so the ground is saturated and flowers are starting to grow, but few have bloomed. I included the picture of the Monkeyflower above because it was the ONLY one I could find. But at least it holds the promise of a colorful flower show in the next couple of weeks. 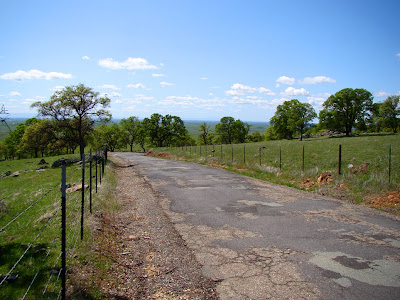 We headed up a road we've never followed before, Hunt Road out of Milton (and congratulations if you have ever heard of Milton). It was the kind of road so rarely traversed by sightseers that the ranchers look at you long and hard to see if you are capable of rustling their cattle. The road itself has been patched to the extent that the asphalt filling the potholes exceeds the amount of original pavement. But it was a beautiful drive. We climbed the escarpment underlain by the Gopher Ridge Volcanics, composed of the remains of island arc terranes that slammed into the western edge of the North American continent during the Jurassic and Cretaceous periods. Oak trees and the exposures of the metavolcanic greenstone were all around us. We could see the prairies of the Central Valley below and the Coast Ranges on the far side of the valley. 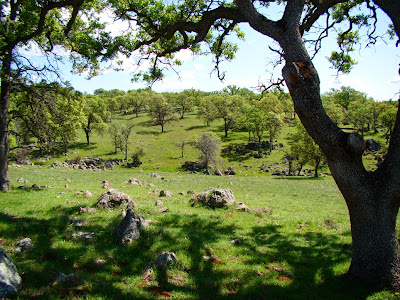 In the rugged terrain near the crest of the ridge we passed a stamp mill left over from the gold mining days. I don't know the name of the mine. 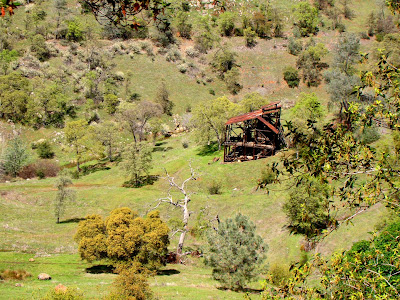 After crossing the ridge, we entered into the vast meadow of the Salt Springs Valley. It looks like a flood plain filled with alluvium, but it is actually underlain by the Salt Springs Slate, which weathers quickly into a clay-rich soil. 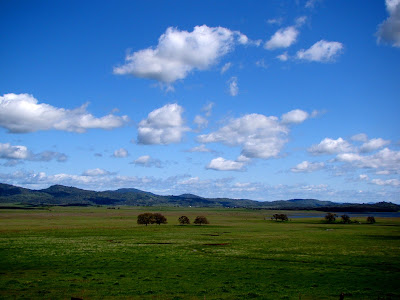 Bedrock exposures stick up here and there, forming the famous "tombstone" rocks. The original mud and silt of the ocean floor has been compressed and hardened into the slate, but at heart these rocks are still clay, and break down quickly. The quartz bearing silt layers are more resistant to erosion. 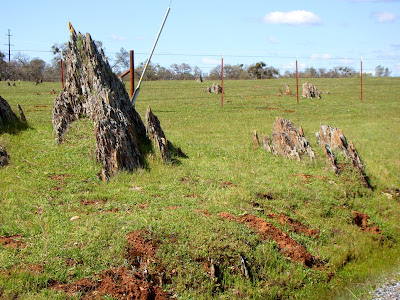 Roadcuts into the slate reveal the inherent weakness of the rocks. Large slabs have broken off and slipped onto the roadbed. If you look carefully on the lower left, you can see some of the few poppies that we saw today. 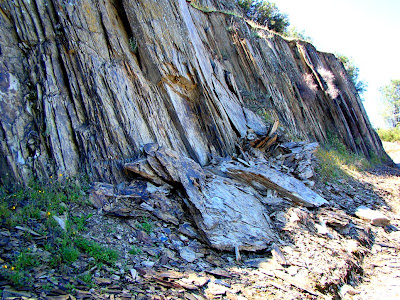 We suspected we might find some flowers in at least one spot, so we drove south for 40 miles to the Red Hills "Area of Critical Environmental Concern" (and isn't that a mouthful?). The landscape there is underlain by serpentine and other ultramafic rocks, and grasses are so rare that other plants and flowers provide the dominant ground cover. Even the Red Hills were just beginning to show some color, with just Goldfields carpeting the rocks, and the one Monkeyflower shown at the top of the post. 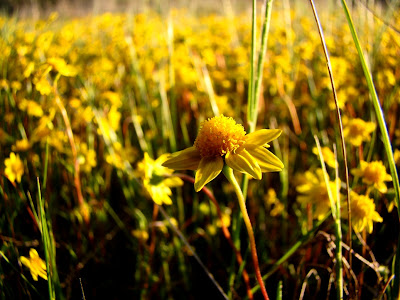 In a few weeks, this spot will be alive with poppies, lupine, and a myriad of rare serpentine-tolerant flowers. We will be sure to visit in a bit and provide an update. 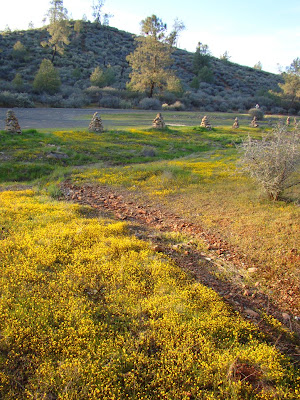 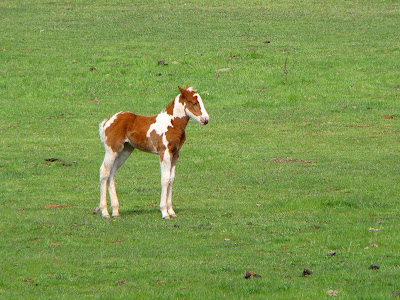 Ooooh! I spent the weekend being unproductive and grumpy about an abscessed tooth that won't be treated until Tuesday (but thank whatever deities might exist for ibuprofen!).

You spent the weekend having a marvelous time! (And I never knew that serpentinite-soil-tolerant plants sprouted wildflowers! That may mandate a visit for me this week for a hike in the Santa Teresa Hills south of San Jose, CA, where there are serpentinite hills.

Well, that's one way to get me back to reading about geology. Always have to check out pics of a baby horse! Glad you had a great day.

Nice to get out and smell the posies.

Ah, but foal sounds so clinical, so scientific. "Horsie" sounds...cute. Just enough to get people to read!