Strangers in a Strange Land: Even the volcanoes are a bit weird 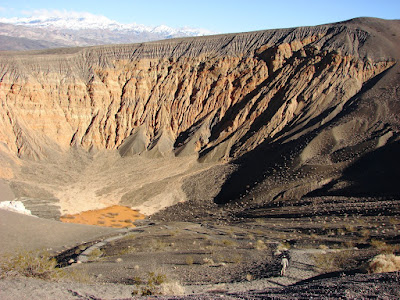 Death Valley is a Strange Land, and we were strangers within it. Even the volcanoes are kind of odd, at least if you think volcanoes are big cones that put out lava flows and clouds of seething ash. The presence of the volcanoes is not strange in itself; it is a natural consequence of crustal extension. As normal and detachment faults broke up the crust, decompression allowed partial melting of the underlying mantle, producing basaltic magmas. Sometimes the magma rose into the crust, and melted the granitic rock into rhyolite lava that produced explosive caldera eruptions, including the one we observed in this earlier post. There was also some cinder cone activity at the south end of Death Valley, including a cone that was offset by a right lateral fault. But it is the northern end of Death Valley that has one of the stranger "volcanoes" that you might want to investigate if you ever visit. 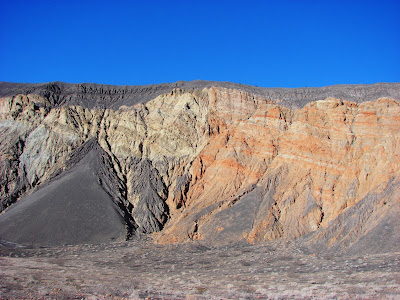 Ubehebe Crater is a half-mile wide hole in the ground, around 600-700 feet deep. It's a bit unlike your stereotypical volcano, in that there are no lava flows or ash deposits. It is a big hole, but the walls of the crater are composed of orange and yellow lake sediment, and a nicely exposed fault (above). There are just little fragments of basaltic rock spread over several square miles, and a dozen or so craters. Ubehebe is the biggest, and Little Hebe (below) is one of the youngest, at least in appearance. 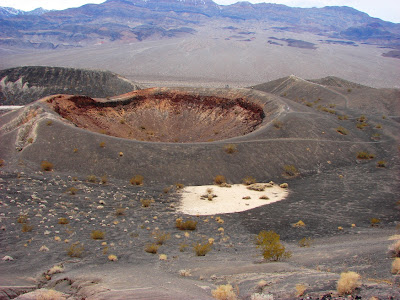 The other oddity is the bizarre layering along the margins of the craters (below). They are composed of bits and fragments and sedimentary rock and basalt that have been blown out of the crater onto the surrounding terrain. But no lava flows in or around the craters at all. So what was exploding? 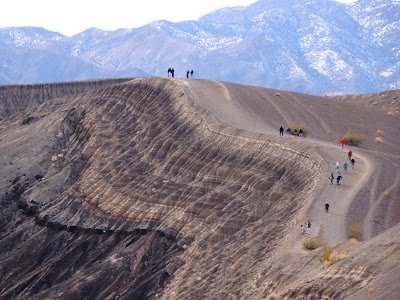 Basalt is not as explosive as other types of lava, and other cinder cones in the region along the margins of the valley formed normal cinder cones and lava flows, which can be seen in the picture below. The Ubehebe Craters are more in the middle of the valley, but in a spot where a fault was present which allowed magma to rise through water-saturated lake sediment. The water was heated far past the normal boiling point because of the higher pressure at depth. Eventually the temperature rose so high that the water flashed to steam, and the ensuing explosions formed the craters and layering along the rim. Such volcanic features are called maars. 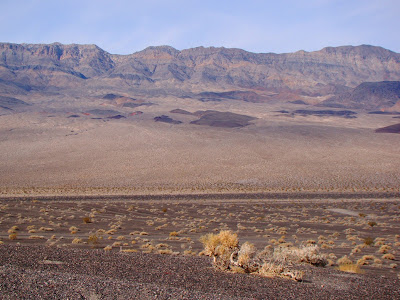 The National Park Service has recently completed a renovation of the parking area, and has posted new interpretative signs, including the aerial view of the site (below). It allows us to see the overlapping nature of the craters, showing their relative ages. The Ubehebe Craters have always been known to be young features, less than 10,000 years, but some recent research indicates they could be as little 800-2,100 years old. Media reports kind of played up the "recent" angle a bit much, suggesting they could erupt any moment (sillies, those things won't happen until December when the Mayan Calendar ends). I guess that is what the media needs to do to sell things, but at least people learn that there are things in Death Valley other than reptiles and sand.

Walking down into Ubehebe is a really breath-taking experience (I mean that literally, especially when one is trying to climb back out). I was struck by the youthful appearance of the slopes. One has to allow for the arid climate, but I have seen quarries and failed housing developments that look more gullied, and more recent. 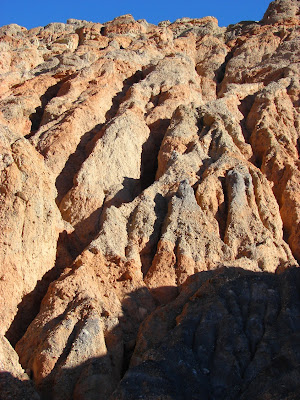 Check out the miniature wineglass canyon below, with an alluvial cone forming the base, and the valley in the shadow above forming the cup. Sort of a Death Valley mountain range in miniature. 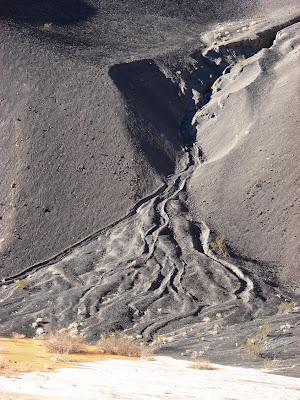 Ubehebe Craters are a fascinating place to visit, but are pretty isolated unless you are headed to Scotty's Castle. On the other hand, the Craters are on the road to one of Death Valley's strangest sights of all, which we discuss in the next post, even though I've never been there. But I have pictures of what makes it strange!
Posted by Garry Hayes at 1:24 AM

Oooh! Remarkable levees on the channels in that mini-alluvial fan in the bottom picture.

I had thought to mention them, but it was pretty late in the evening!