A Pair of Large Earthquakes in the Indian Ocean

It's the stuff of nightmares at first glance, but there is some positive news about two huge earthquakes that struck several hundred miles offshore of Banda Aceh in Sumatra this morning. At 8:38 UTC (1:38 AM in the Pacific time zone) there was a magnitude 8.6 event with an estimated depth of about 14 miles. It was followed by a magnitude 8.2 event in the same region a little over two hours later. Given the horrific tragedy of 2004 when a tsunami generated in the region killed a quarter million people, this surely caused a sense of concern and panic. But there is a huge difference in the quakes that happened this morning. 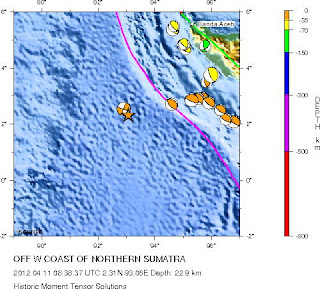 The "beachball" symbols on the map above from the U.S. Geological Survey show the type of fault that produced the earthquake, and they indicate that this morning's quakes exhibited right-lateral strike-slip motion. This is good news because it means that the seafloor shifted sideways during the quake, instead of vertically. Accordingly, a large tsunami is unlikely, although a warning has been quite logically announced. Make no mistake, these are huge seismic events, and if they had occurred on land anywhere near a population center, they would have been horrible disasters. Preliminary news reports indicate that warning systems worked as people moved away from low ground along the coast. A sense of panic, no doubt, but at least there were warnings given, unlike in 2004.

For some details on the somewhat odd nature of these earthquakes, check out this analysis at Lithics.
Posted by Garry Hayes at 8:11 AM

I mentioned the 'quakes to my classes this morning, but I kind of glossed over the fact that they weren't at a plate boundary -- which was embarrassing, since the topic of today's lecture was plate boundaries!

But the analysis at Lithics cleared things up for me. Thank you for posting this!

By the way -- the Pacific Tsunami Warning Center said that there was a tsunami, but the highest wave height on landfall was just over 1 meter.

These earthquakes were very unusual, so I guess it's fitting that these strike slip 'quakes did generate a tsunami!