Why no one thinks geologists have a sense of humor...

Yeah, we have this problem. People think we geologists have no sense of humor. Especially when it comes to geology jokes. Take this headline from the Onion News, please:

SAN ANDREAS, CA—A local store specializing in fine china and delicate shelving was, for the 18th time this year, forced to re-order its entire inventory. 01.03.06

Now, most people get the joke. I did not. I was trying to find some kind of clue about the store being next to a cow pasture where the bull gets out every day and runs rampant through the store. Here's the problem. It's obvious that the joke has to do with our iconic San Andreas fault, and our many earthquakes. In that context, the joke makes a certain amount of sense, i.e., constant earthquakes constantly destroy the store's wares. 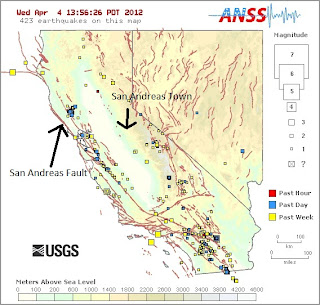 But...there really is a town in California called San Andreas. I was actually there on Sunday. But San Andreas the town lies about 80 miles east of the San Andreas fault, because it is in the Sierra Nevada Mother Lode on Highway 49, and the fault runs through the Coast Ranges and out to sea. As can be seen, people in San Andreas have very few earthquakes. But there are a lot of bulls and cows around the town. Many people who live in California don't actually know about this distinction, since most really don't know about the location of the San Andreas, or of any other faults for that matter.
So there. I managed to mess up a joke on the Onion News, the nearly undisputed royalty of online humor.

I hereby offer some substitute humor that no one else really understands either:
Why do geologist couples hardly ever have children? Because they have plutonic relationships.
How did the geologist know the tombstone was made of marble? Because we just don't take things for granite.
Why is it hard to criticize a geologist? Because we already know our faults.
Why do geologists make good lovers? Because we know all about orogenic zones, and the delicate process of subduction. And we are gneiss people, too.
Why did the geologist get kicked out of the symphony? The geologist only knew hard rock songs.
What do geologists say when they are having a really bad day? Oh well, schist happens...
Ugh...anyone out there have some better material?
Posted by Garry Hayes at 2:29 PM

Thanks for sharing your jokes, I'll know when to laugh in class now!

Oh man! Geology jokes are the best :D I was on the committee for our geology dept's student society, and one of the team was like a pun-master.. this is a screenshot of a facebook thing I did, you may find it amusing.. (it kept (and still keeps) us laughing for ages :D http://i44.tinypic.com/ojqult.png

I don't know why, but almost all geology jokes are puns -- and most of them are pure PUNishment.

Perhaps it's the nature of geological terms. After all, if you name a mineral "cummingtonite" you're just asking for lots of ribald puns.

Or maybe it's the nature of geologists -- after enough field work, our brains are metamorphosed by heat from the sun, converted to unfossilized coprolite, and we think the most sillimanite joke is pure gold.

I love your geology jokes!