El Capitan is Gone! Where in the World is Carmen Sandiego?* 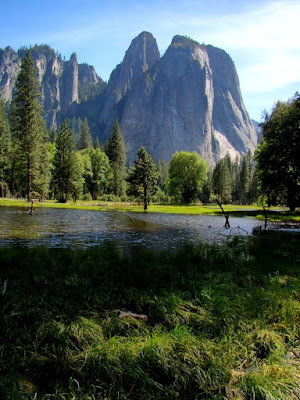 Whatever will we do?? What is Yosemite without El Capitan? Is it worth visiting? Well, as I've said before TURN AROUND! There are so many treasures in the valley, and today's feature is no exception. Almost everyone stops near El Capitan Meadow to look for climbers on El Capitan, and as I watch the crowds with their binoculars, few of them are ever looking at the valley wall to the south. Where else in the world would cliffs like these not be a national landmark all on their own? Welcome to Poosenachucka, which means the Large Acorn Cache (most people these days call them the Cathedral Rocks and the Cathedral Spires)! 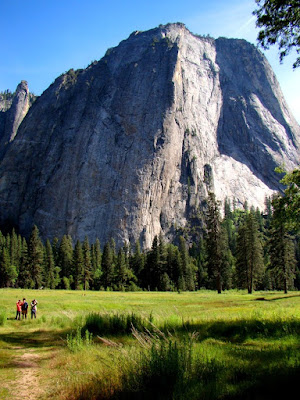 The cliffs at Cathedral Rocks are only 500 feet shorter than the 3,000 foot precipice of El Capitan on the north side of the valley. Both are composed of the relatively unjointed and therefore highly resistant El Capitan granite. The largest glaciers that moved through Yosemite Valley around one million years ago (the Sherwin stage) scoured out deep basins approaching 2,000 feet deep in the upper valley, but the ice river was constricted at the "gateway" between El Capitan and Cathedral Rocks, and the sediments below the valley floor there are only 300 feet thick.

The glaciers of the younger Tahoe and Tioga stages only reached the base of the two cliffs, and had nothing to do with the sculpting of the high cliffs. A series of terminal and recessional moraines are found on the valley floor beneath the steep walls of granite. 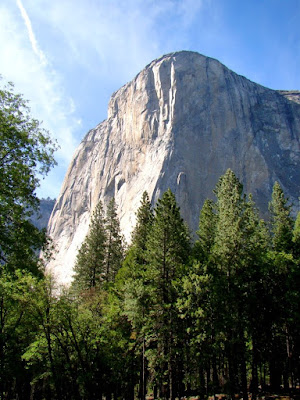 Of course, it's hard to ignore El Capitan when you stand beneath it! Once again, a series of pictures provide a sense of scale of these immense cliffs. The picture above is a view of the entire cliff from near El Capitan Meadow. Zooming on the vertical cliffs near the summit, one can see a diagonal crack casting a shadow. Can you see a dot to the left of the crack? 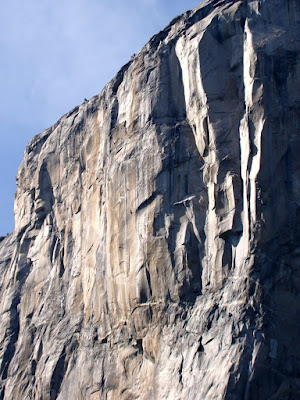 Zooming in again, we see a pair of climbers working their way up the cliff. The climb is usually a 2-3 day expedition. When we left the valley in the late evening last week, we stopped at El Capitan Meadow to look at the stars. To our surprise, five or six of the "stars" were actually the flashlights of climbers on the cliff settling in for the night. 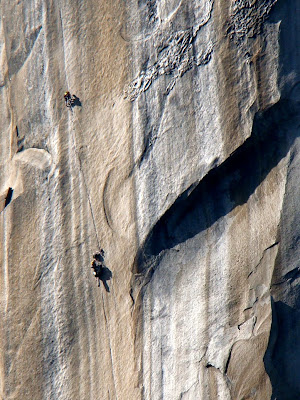 *For the uninitiated, Carmen Sandiego was a popular computer franchise that involved the theft of unusual objects like the Eiffel Tower.
Posted by Garry Hayes at 3:27 PM

It's breathtaking. But I think the over night climbers are crazy. I'll enjoy it from the ground thank you. Hope to visit Yosemite this fall.

If you come out this way, be sure to look us up!