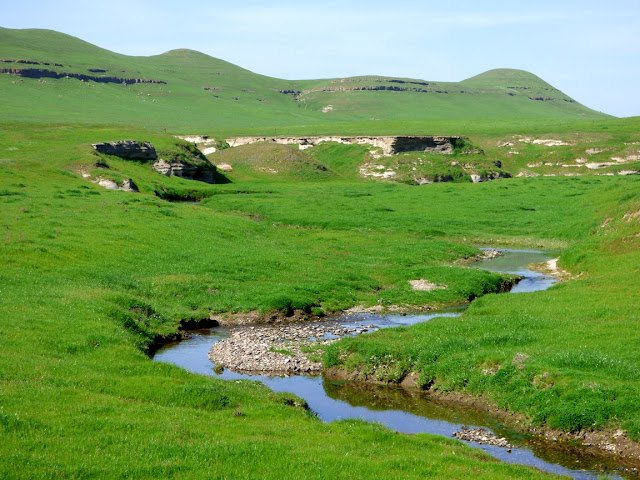 The green hills of California's prairie barely conceal a horrific violent past. Around 20-23 million years ago, huge volcanic eruptions shook the western part of North America. Ash (pulverized volcanic rock) blasted into the atmosphere in unimaginable volumes, 100 cubic miles or more. Some of the ash was driven into the upper atmosphere, to be spread around the world with the wind currents, but much of it settled in layers that covered tens of thousands of square miles. Living things would have been buried at best, incinerated at worst. Any one of these events would have been a catastrophe. But there were many of them. 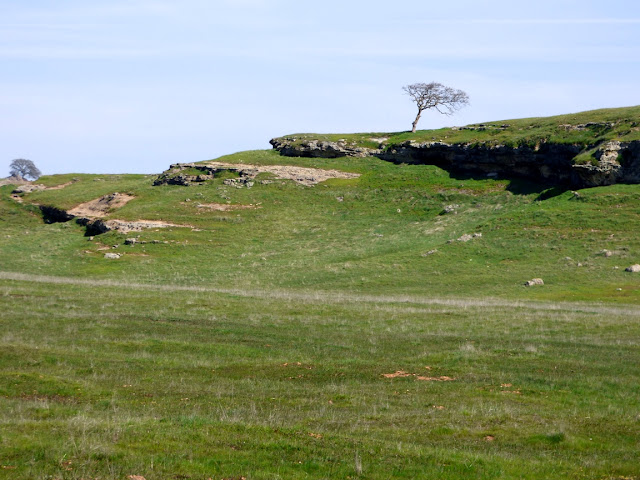 Some of the ash clouds rolled off of highlands that once existed in central Nevada and flowed west into California and down the western slopes of the slowly rising Sierra Nevada. These ash deposits are called the Valley Springs formation, and this rock still influences life in the present day. 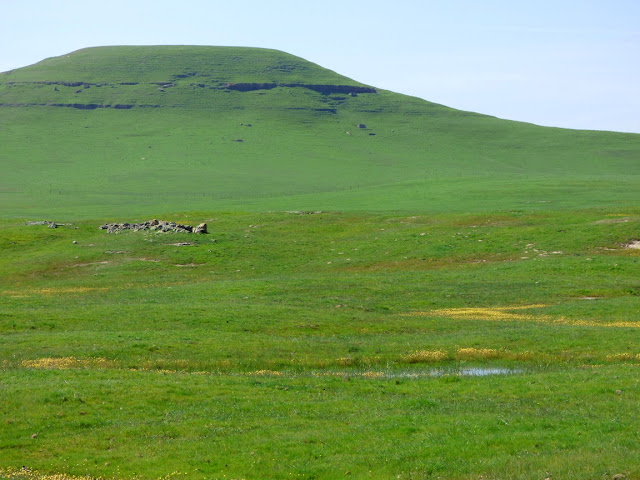 The ash eruptions subsided, but new volcanoes developed at closer quarters, near or just east of the present-day crest of the Sierra Nevada. An occasional lava flow reached the lower foothills of the Sierra, but more often, it was a volcanic mudflow, or lahar, that came to inundate the landscape. The rocks today are called the Mehrten formation. Numerous animals lived on the resulting river floodplains and lakes, include tremendous six-foot long salmon (with "tusks"), and tortoises the size of their Galapagos cousins. Mastodons, horses and camels wandered the plains, chased by fearful carnivores, including the ancestors to the Sabertooth cat. 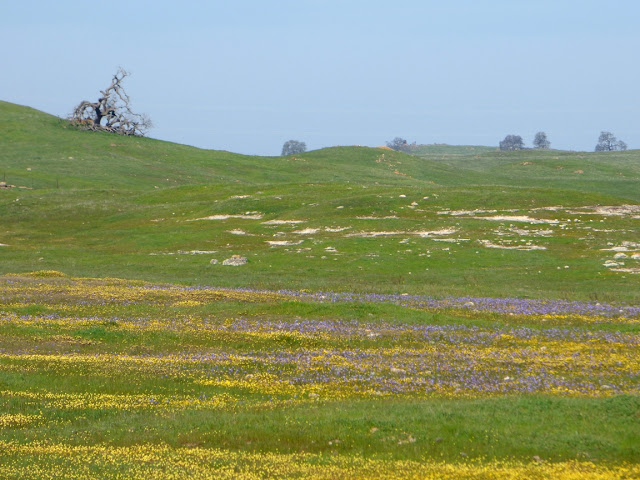 The geologic violence subsided, and erosion has subsequently smoothed off the hard edges of the volcanic rocks. In the semiarid climate, it is mostly grass and annuals that grow here, although the occasional oak survives in the barren landscape. The volcanic rocks contributed to the unique habitat that exists here today, providing through the weathering process copious amounts of clay.

Most of the minerals in ash will decay over time into one of the clay minerals. Soils that develop at the surface tend to be clay-rich, or clay may be present just below the surface, forming an impermeable barrier that prevents water from percolating into the ground. Because wind can blow out hollows, and because clay-rich layers can differentially settle, small pools of water may remain after major winter rainstorms. Because the water can't percolate, it doesn't disappear until it evaporates. The resulting ponds are called vernal pools. The pools are one of our more unique and unusual habitats in California. 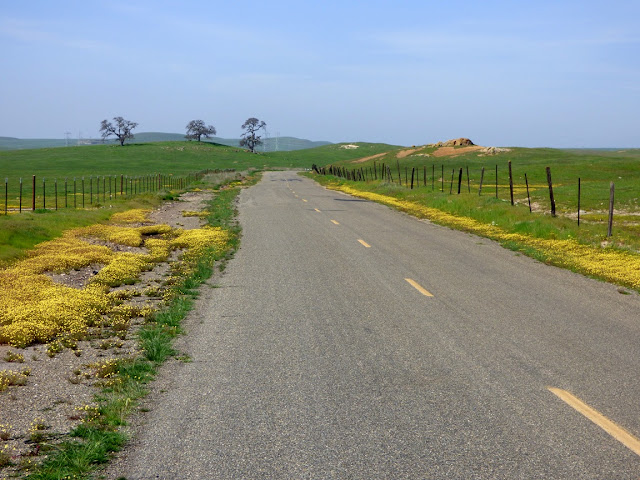 A large number of species of plants and animals have evolved to survive in this environment that swings wildly from wet to dry within a period of weeks, and many of the species are endemic to the state. Colorful wildflowers bloom quickly in the drying rings of the "shores" of the little ponds, growing and setting seed before the water has completely dried up. The seeds can repose in the soil for years at time when drought dominates the landscape. Frogs and other amphibians may burrow into the soil and estivate (remain inert) for months on end, waiting for the rains to return. 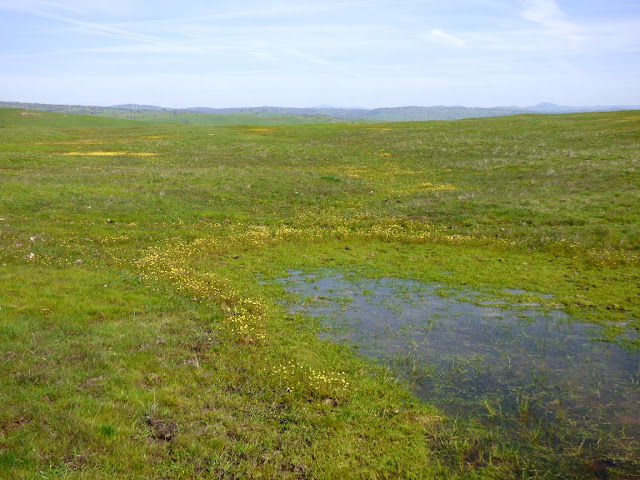 We spent a delightful afternoon out on the prairie last weekend. It's not too hard because our village lies on the edge of the grasslands. We traveled Willms Road south of Knights Ferry near Highway 108. The spring flowers were just beginning to make an appearance following a warm dry February. There had been fears that this was the end of our rainy season, but a number of vigorous storms are on tap for the next two weeks, so the pools may be filling again for awhile. 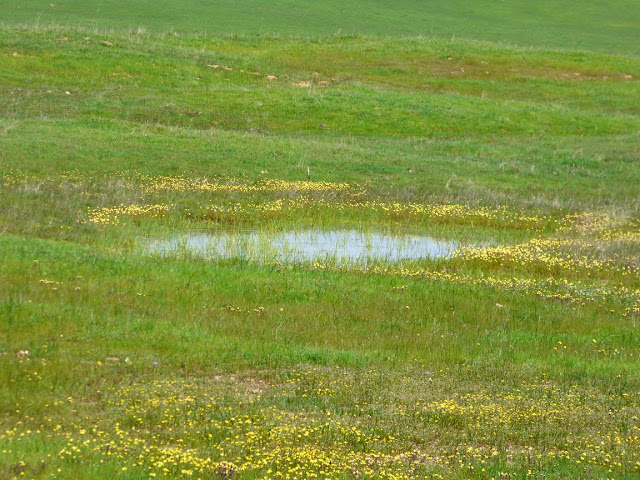 Many birds call the prairie home. We felt especially lucky to see a pair of Great Horned Owls in a hollow along an ephemeral creek. The Valley Springs formation is soft and easy to excavate, but the holes are architecturally sound. 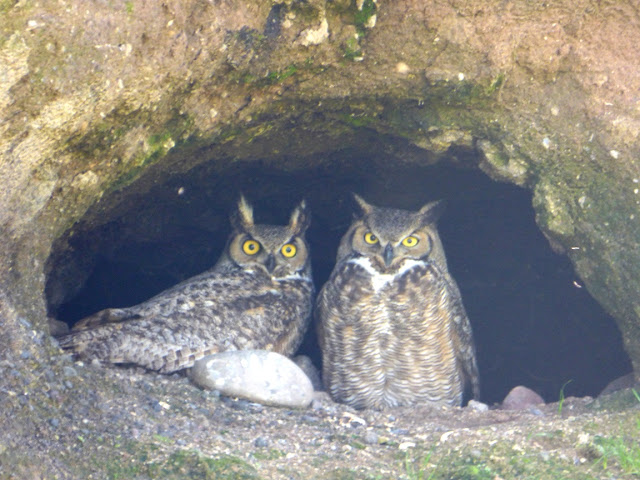 A Savannah Sparrow favored me with a pose on a fence next to the road. It was the first time I've had a chance to photograph one. 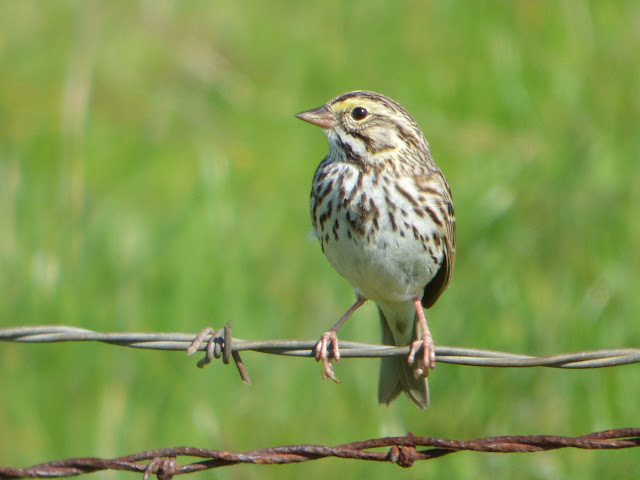 It was also the first time that I captured a Horned Lark. I thought at first that it was a Western Meadowlark, but I realized the markings were all wrong. 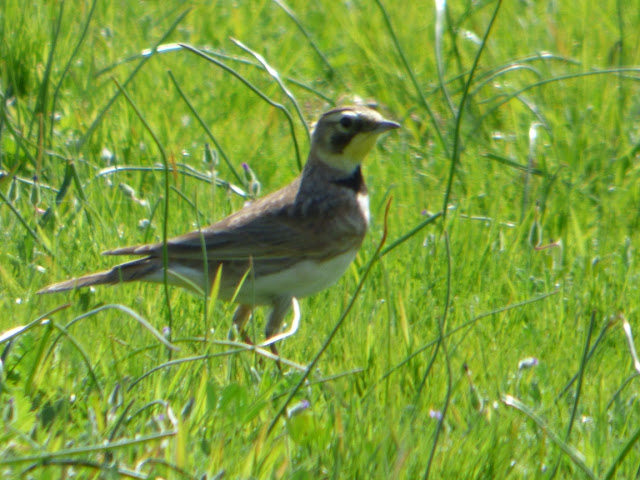 The Meadowlarks were certainly out and about, though. We could hear them all along our drive. At this time of year, they're looking for mates, and aren't at all bashful. 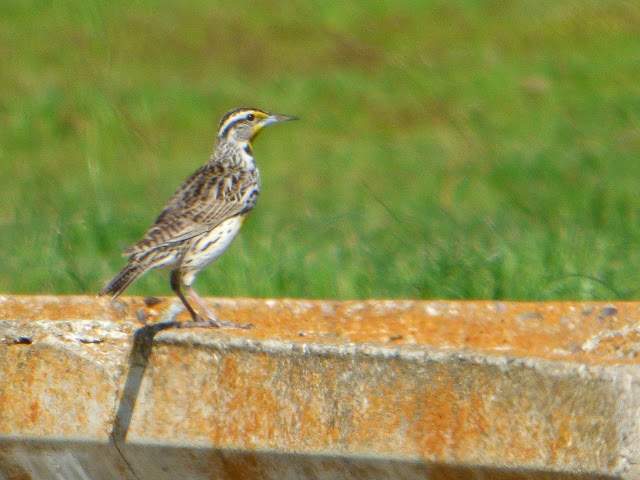 It was a beautiful afternoon in a serene "wilderness" (these are really private ranchlands), but we were also chastened by the sight of thousands of acres of new almond orchards that have been planted just to the west. The water for the trees is coming from irreplaceable groundwater aquifers, and when they have been sucked dry, the almonds will die away. In the meantime, hundreds if vernal pools will have been destroyed.

How far south in the Great Valley does the Mehrten formation go?

The Mehrten disappears in the vicinity of the Merced River. There are only a few exposures of volcanic rocks south towards Fresno.