A Sight That Overwhelms: Dante's View and a Sense of Scale 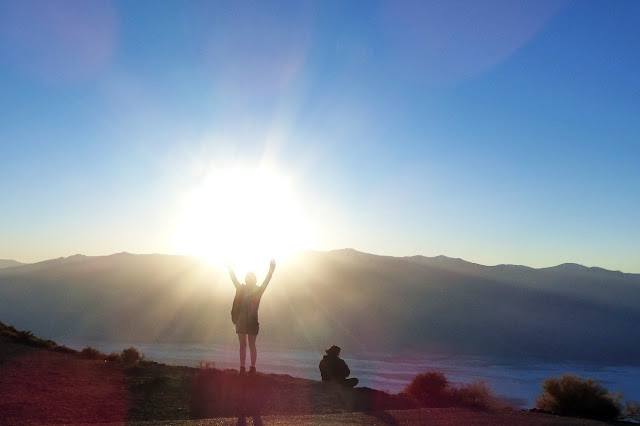 It's one of the most astonishing viewpoints in all of North America. The Black Mountains form the eastern edge of Death Valley, and they are one of the most rugged mountain fronts in existence. In places the mountains are so steep that one cannot see the slopes at the base from the summit. Looking up from the lowest point in North America, Badwater, one can barely contemplate walking or driving to the summit across the barren cliffs. 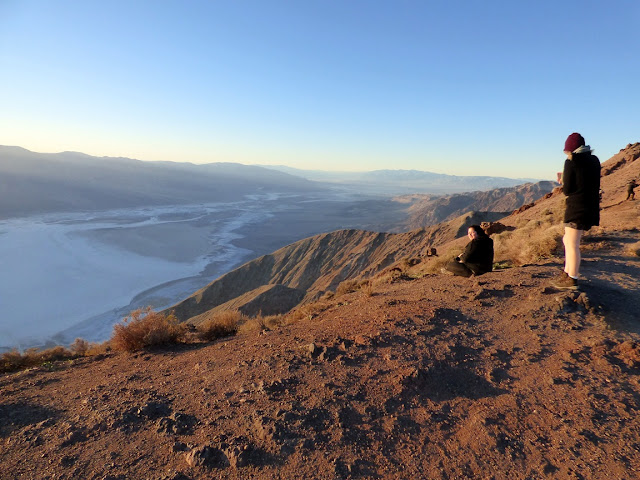 And yet a road does just that. Taking advantage of the asymmetrical nature of the range, a paved road winds up the eastern flanks, and only the last few hundred yards of the drive are a vertiginous nightmare. And then there is a view like no other. 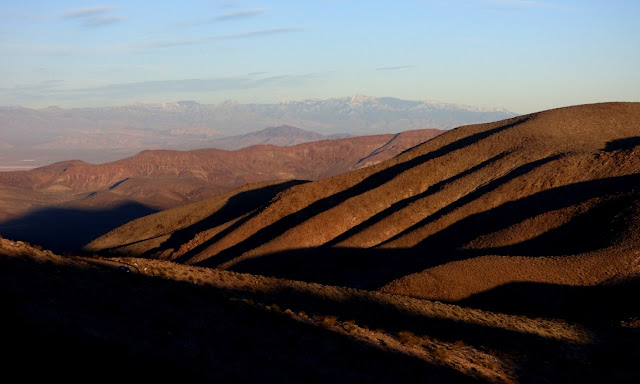 Death Valley is the largest national park in the lower forty-eight states, and Dante's View takes in much of the park, offering on clear days a view that extends across more than a hundred miles of desert ranges and salt flats. The view is so unlike any other place on the planet that George Lucas used it as setting for his alien planet in some movie about wars across the stars ("Mos Eisley spaceport. You will never find a more wretched hive of scum and villainy."). 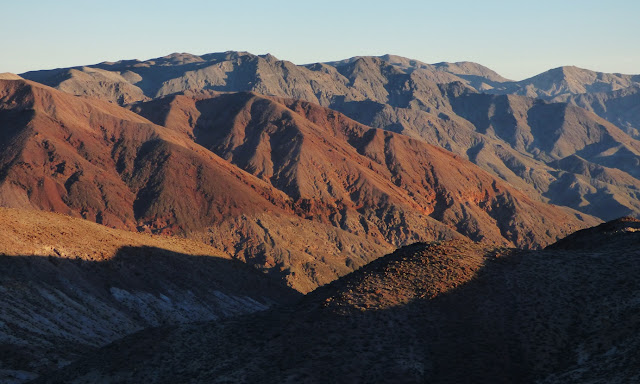 Even though the summits reach nearly 6,000 feet above sea level, the slopes are barren and dry. The range lies in the rain shadow of the Sierra Nevada and two other high mountain ranges, including the Panamints that rise to 11,000 feet on the other side of Death Valley. In any other mountain range, 6,000 feet would support a thick forest. Here in the Black Mountains, only sage and seasonal wildflowers can grow.

The lack of vegetation is a boon to the geologist, of course. The exposures of bedrock are unparalleled, revealing a great deal about the geologic history of this part of the world. And it is a strange story. Much of the mountain range is composed of the Black Mountain Metamorphic Complex, a selection of gneiss and schist sequences that reveal evidence of a titanic series of plate collisions 1.7 billion years ago. At that time, North America was hit by a series of terranes, island systems maybe the size of New Zealand or California. The collisons produced a mountain range hundreds of miles long that would recall the coastal ranges of southern Alaska, minus the rainforests (terrestrial life didn't arise for at least another 1.2 billion years). These rocks are related to those found in the depths of the Grand Canyon and farther south in Arizona and New Mexico.

In the ensuing years, the vast range would be eroded to a nearly flat plain, and the surface would eventually subside below sea level. Tens of thousands of feet of Paleozoic sediments covered the rocks so they lay hidden deep in the continental crust. In the last few tens of millions of years, the regional crust was stretched and extended, and the overlying rocks slid away, causing the Black Mountains to "pop up" in the geologically short stretch of two or three million years. The exposure of the deep crust was accompanied by violent caldera eruptions, and parts of the mountain range are covered by colorful ash deposits (the rocks along Artists Drive Loop are particularly memorable). 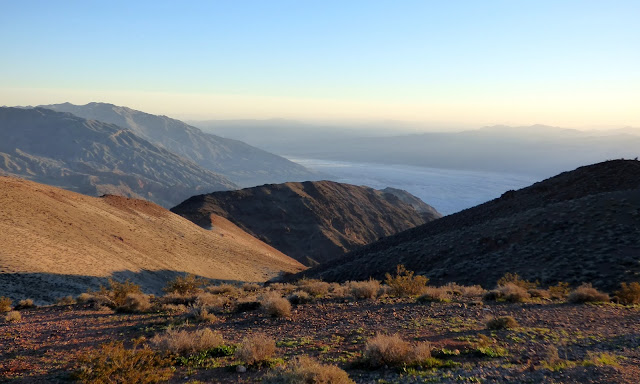 Some places are so overwhelming that one can lose a sense of scale while staring into the abyss. Take a look at the picture below: we are looking at the vast salt pan of the Badwater Basin, the lowest place in North America at minus 282 feet. The salt flats cover 110 square miles. How big an area is this? 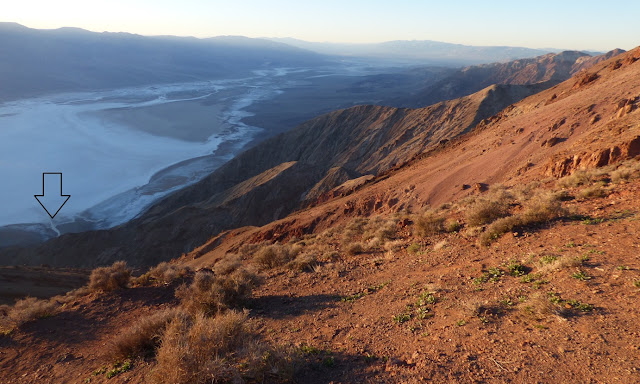 To find out, take a look at the thin channel of salt marked with the arrow in the picture above. We'll zoom in a bit, and find that we are looking at a spot next to the Badwater parking lot, which is just out of sight at the bottom of the picture. One can make out the Badwater Road on the left side of the photo. What are those dots on the salt channel? Let's zoom in a bit more (120x by now). 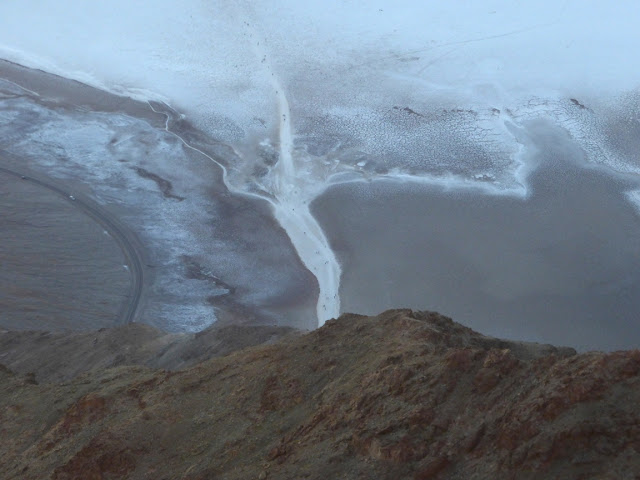 They're tourists! Badwater is a main destination for visitors to Death Valley. The stop lies 5,700 feet beneath Dante's View, and only two miles west. These mountains are about as steep as any can be. 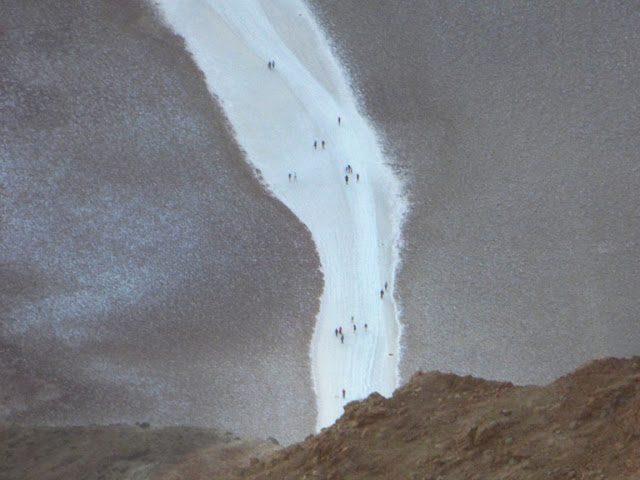 The view from Dante's View on this afternoon in February was unique for me. Flash floods in October had destroyed some roads in the park, and I found it necessary to alter our usual itinerary. We usually see the viewpoint in the early morning. Until this day I had never seen the sun set over desert like this. It was an astounding sight. Even overwhelming...
Posted by Garry Hayes at 10:32 AM

Great photos. I did get out to Death Valley a couple of weeks ago. It was truly breathtaking, especially the view as you are heading down from Red Pass. But, of course, I loved it all. I went on an organized trip and we camped just west of Hole in the Wall. Got a lot of hiking in and we covered lot of ground. I was telling people when I got back to Denver and they asked for photos that I would need to be a professional photographer with a helicopter in order to do the park justice.

Hopefully, I can make your Death Valley trip next year.