Death Valley is one of the greatest geological national parks in the world. The largest U.S national park outside of Alaska, it exposes 1.7 billion years of earth history, with incomparable exposures of igneous, sedimentary and metamorphic rocks covering every geological era from the Proterozoic to the Cenozoic. Grand Canyon National Park has the reputation as a geological encyclopedia, but the exposures at Death Valley are more than twice as thick!
My students and I make a trek to Death Valley every February on the President's holiday weekend. Our focus of course is on the geology, but this year involved some biology. Although Death Valley is one of the driest places in North America, when rain does come, seeds in the desert soils are waiting. When conditions are just right, maybe once a decade, there is a "superbloom" of desert wildflowers. There were the El Nino years 1998 and 2005, and there is now the El Nino year of 2016.
The weather events have been extreme at times. A flash flood at the north end of park laid waste to the grounds at Scotty's Castle and eradicated a major highway. The usually dry desert wash had a flow estimated at 9,000 cubic feet per second. For comparison, the Tuolumne River back home is considered at flood stage with a flow of that magnitude. Imagine unleashing such a flow on a dry wash, add tons of mud and boulders, and you get the idea. Another flood wiped out the highway from Shoshone over Jubilee Pass into Death Valley. We had to change our normal itinerary in a big way.
So it was that we found ourselves driving the entire length of the southern half of Death Valley so we could then make our leisurely geological explorations one after another on the way back. This plan gave us an overview of the geology of the valley, but it also gave us a dramatic view of the opening stanzas of the "superbloom". It was running weeks earlier than normal. Most years we see few, if any flowers at all. If this had been a trip with just Mrs. Geotripper and I, we probably wouldn't have even made it to the south end of the valley before sunset. We would have stopped too much! But we had geology to do, so these are drive-by shots of the flower show.
The graben (fault basin) of Death Valley has 11,000 feet of relief, exposing two vertical miles of the Earth's crust. Although the valley is very youthful in the geologic sense (only a few million years), erosion of the surrounding mountains has filled the fault basin with as much as 9,000 of silt, clay and salt (the basin is closed, not able to drain to the sea; much of it is below sea level). 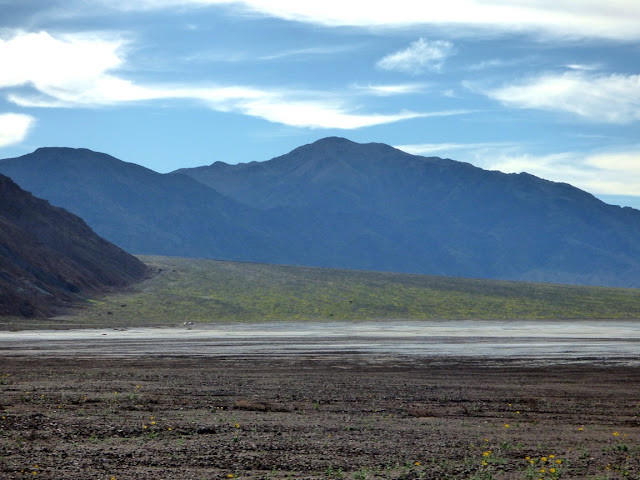 It is so very strange to see the alluvial fans that are usually so barren turning green and yellow with life. The flowers increased in number as we moved south, I assume due to better exposures to sunlight. It seems to happen that way the few times I've seen plentiful shows of color. 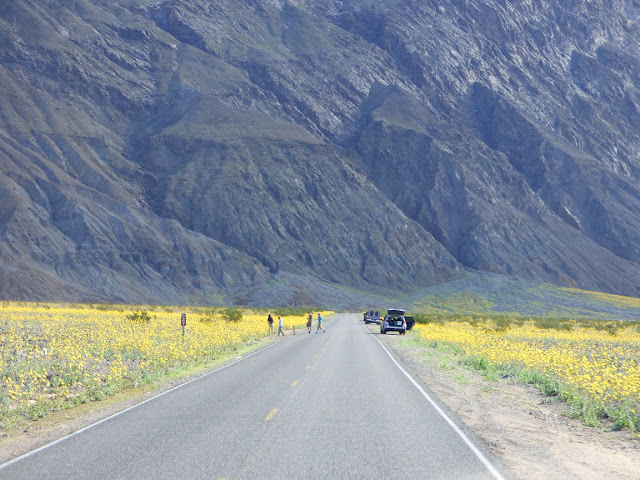 It's a wondrous show, and park visitors were in sort of a trance. The kind of trance that causes them to wander aimlessly across busy highways without looking around for oncoming traffic (like heavily loaded college vans). 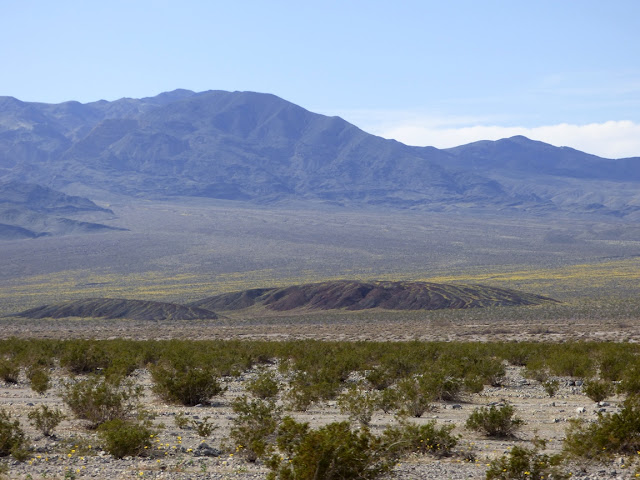 As we approached Shoreline Butte and the offset cinder cone, flowers covered much of the valley floor, and climbed far up the alluvial fans. Maybe flowers cover these surfaces more often in the main flower months of March and April, but I can't remember seeing them in February when we are usually there. 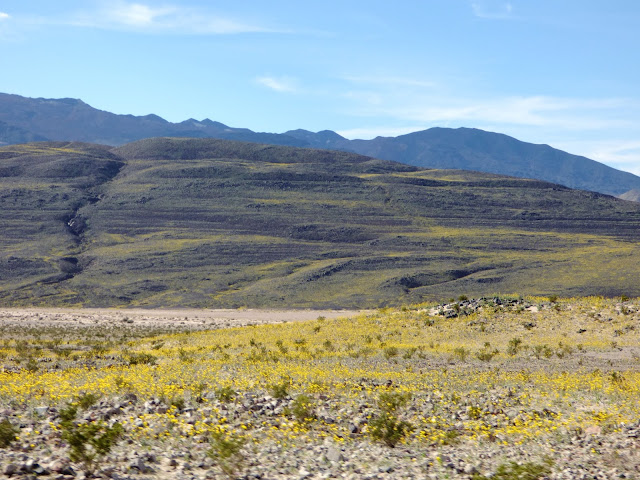 Shoreline Butte itself was covered with flowers. The butte is a cinder cone that has been shaped by the waves of Lake Manly, the ice age freshwater lake that once filled Death Valley 600 feet deep. The lake was present most recently about 20,000 years ago.

So, you are wondering, did we stop AT ALL where we could see some flowers up close? Why yes, yes we did. I made sure that some of our geology stops would require walking through the fields of Desert Gold, Five-Spot and Phacelia. Pictures will be coming soon!
Posted by Garry Hayes at 8:56 PM