This is One of the Rarest Forests on our Planet, and Yet One of the Most Widespread 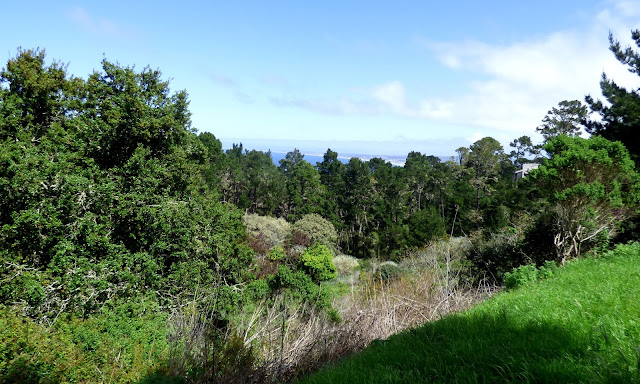 This is one of the rarest forests on our planet. I know of a number of different species that are represented by extremely limited habitats; there are the Dawn Redwoods of China (a grove of maybe 5,000 individuals), the Wollemia "Pine" of Australia (only a 100 or so in the wild), and the Ginkgo biloba (a few scattered possibly wild groves). But I also have a rare native tree in my own backyard, one that is found in just five widely scattered groves: on Cedros and Guadalupe Islands offshore of Baja Mexico, and in Cambria and Ano Nuevo along the California Coast. The fifth, the one I visited this last weekend, is here on the Monterey Peninsula, south of San Francisco.
The species is, strangely enough, the Monterey Pine (Pinus radiata). The pine is well known to many as a Christmas tree species or as a landscaping ornamental, and it is grown as a lumber species on some 10 million acres worldwide, mainly in Australia, New Zealand, Spain, South Africa, and Chile. It's a common tree. And also practically unrecognizable in its own native habitat. The trees that are grown for timber, landscaping and Christmas are highly modified organisms in the genetic sense (GMOs). They look little like the spindly knotted trees that grow on their native landscape. 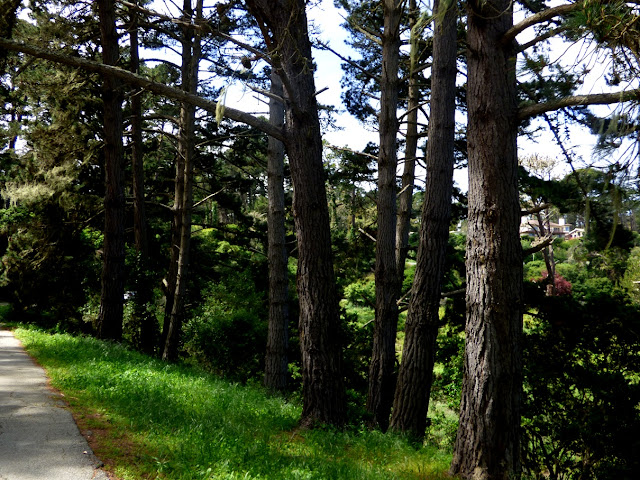 We may often prefer to choose "organic" or "natural" foods for our diet, but practically none of the foods that we grow for our consumption look much like their wild forbears. Bananas, for instance, were practically inedible with giant seeds. Corn was little more than a grass, as was wheat. But these practically inedible natural species have a great value to our civilization: genetic diversity.

Our food supply is vulnerable to disruption from any number of diseases and disorders: such things as fungi, bacteria or viruses could kill off vast sectors of our agricultural products because they are genetically homogeneous. The currently favored banana variety, for instance, may be wiped out in just a few years by a  fungus. 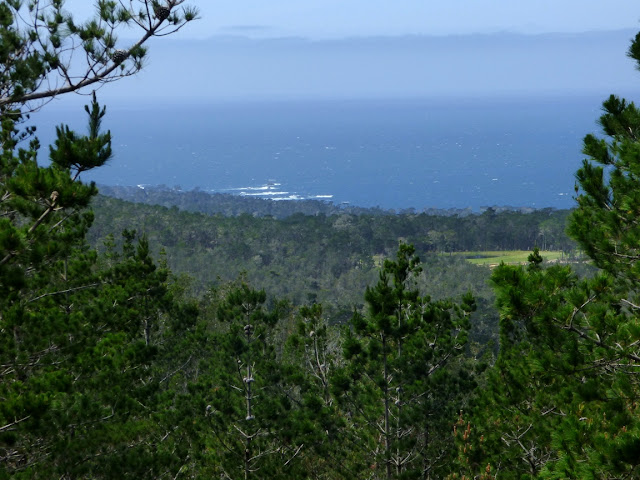 And so it is with the Monterey Pine. Silvicultural methods have taken the pine and transformed it into a rapidly growing tree with few knots in the lower two-thirds of the tree. But the pines that grow on plantations across the world do not have the genetic diversity of the forests in the isolated stands in California and the Baja islands.

The native groves of Monterey Pine are under environmental assault, from development pressures, and from disease. The Pitch Canker fungus weakens the trees, making them susceptible to beetle attack. There is not much in the way of a coordinated treatment for the trees. None of the native groves are on protected federal land, and only one grove is within a state park. For the most part the native groves exist at the pleasure of the private corporations that own the land. 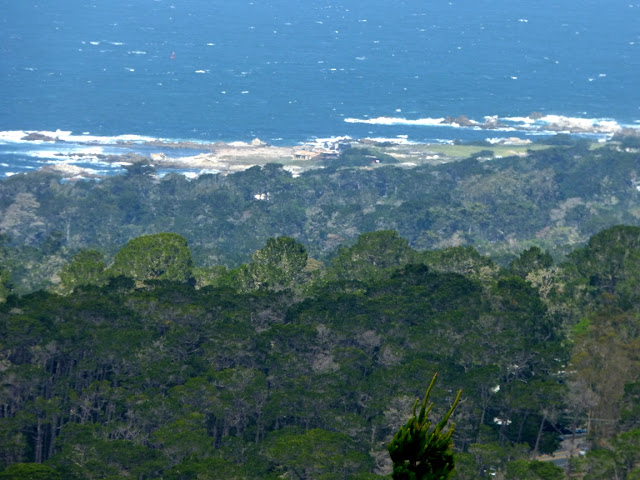 Although they have been far too willing to cut down Monterey Pine forests to make villas and golf courses, the corporation that owns the forests in these pictures knows it has some fiscal responsibility to its shareholders to preserve some intact forests of these trees. They make a lot of money charging tourists like myself who pay $10 to follow Seventeen Mile Drive to see the forests along with the beautiful coastline, the wildflowers, and the mansions of the rich inhabitants of the area. 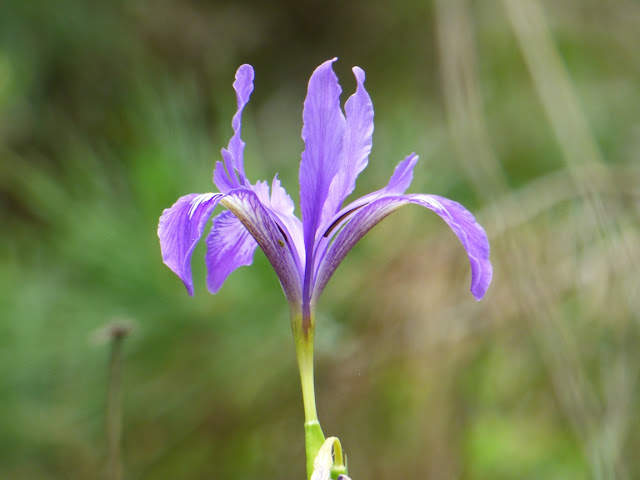 Strangely enough, the Monterey Peninsula plays hosts to more than one extremely rare native forest. The Monterey Cypress (Hesperocyparis macrocarpa) is found in natural groves only at Cypress Point on the peninsula, and at Point Lobos State Reserve. The trademarked tree called the "Lone Cypress" is perhaps the most famous single tree in the California (I think the sadly deceased Jeffrey Pine on the summit of Sentinel Dome in California was a close competitor for the honor). Like the pine, it has become widespread due to planting as an ornamental. 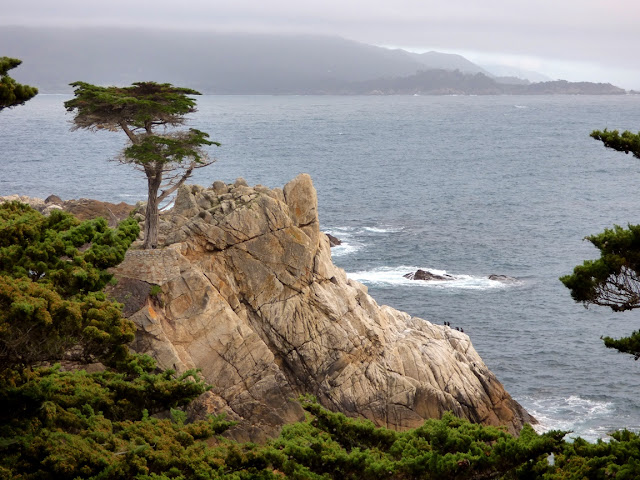 For more on the evolution and distribution of the Monterey Pine, see http://evolution.berkeley.edu/evolibrary/article/montereypines_01.
Posted by Garry Hayes at 10:40 AM

I couldn't get that link to work, but this one did: http://thefieldofgold.blogspot.com/2011/12/california-trees-that-came-to-new.html. It was an interesting article, and I had been wondering what the trees look like in New Zealand.

Sunset's Garden Book is highly cautionary about using Monterey Pine and especially Monterey Cypress in landscaping away from the coast. Both are subject to disease and short-lived inland. That doesn't stop landscapers from installing them (especially the pine). Another one like that is the Lawson Cypress from Oregon - great near the coast, but sold in lots of areas inland where they will die quickly.

Then there's the Coast Redwood. I've seen them planted in street medians in Bakersfield! The Redwood, unlike the others, seems to be adaptable to hotter and (moderately - damaged by prolonged hard freezes) colder climates as long as it gets plenty of water. It's often planted in or next to lawns in the Valley, and in about 10-15 years becomes the lawn as it shades out the grass and the surface roots take over. Redwood roots and slab foundations aren't happy neighbors either. Most of the redwoods I saw in smaller yards while living in Fresno were removed shortly after the 15-year mark - often 40-50 ft tall by then.