The Fabled Island of California? Stunning New Research Suggests the Early European Explorers may have been Right


Some of the earliest maps of California show it to be an island. The "correction" to this misconception didn't occur until 1746 when the Gulf of California and its terminus at the delta of the Colorado River were accurately mapped. For something like two hundred years, the legend persisted that California was a giant island, populated by beautiful women, and possessing vast treasures.
Geologists, geographers, and cartographers have long wondered about this conundrum. How could so many explorers have made such a huge error? Some stunning new research reveals that the explorers may have been right all along. In a paper published in the journal Enquiries (the national edition), geologists have come up with a startling model that suggests that as recently as 250 years ago, California was an island.

Seismologists have long known that most earthquakes are the result of elastic rebound, a theory that suggests that earthquakes occur because of a build-up of stress along faults. Frictional resistance prevents the fault from moving while stresses accumulate, but at some point the stresses overcome the resistance and the fault moves, generating large earthquakes. The idea was proposed by Professor Harry Fielding Reid after the Great San Francisco Earthquake of 1906, and evidence derived from subsequent earthquakes has confirmed the model.

Professor Avril Primum was the lead researcher. She says that the work of her team along the San Andreas fault in Southern California has provided a crucial addition to the model of elastic rebound. Sometime around 1250 AD, a huge earthquake caused massive slip along the fault and a vast region separated from the edge of the continent. But unlike models that would have left California as a permanent island, Primum's team argues that the elastic nature of the upper crust actually caused the island to rebound back to the edge of the continent, maybe during an epic earthquake reported in the early 1700s. 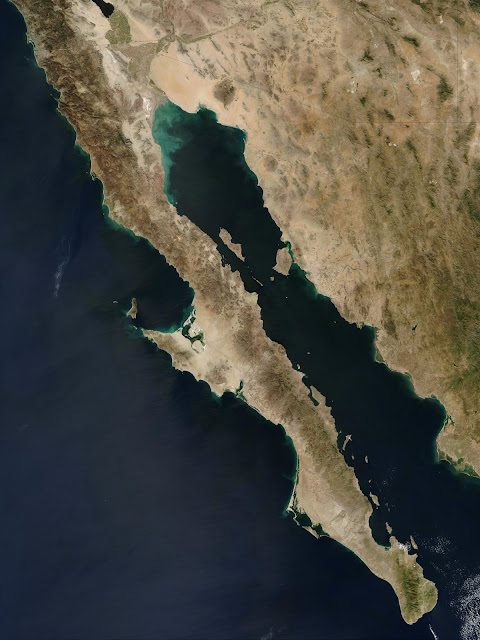 Avril contends that we don't have to worry so much about California falling into the sea. Sure, it might do it, and Duane Johnson, Pierce Brosnan, and Tommy Lee Jones will have to run around saving stranded people, but ultimately the elastic forces will pull it right back just like a bungee cord. We just need to be patient.
Posted by Garry Hayes at 10:40 PM

I think it was somewhat earlier than 1746 that the misconception became obviously wrong. There was an expedition by Father Kino from Mexico into California somewhere around 1700, which reported the lack of a channel between California and the mainland. Besides that the earliest expeditions by the Spanish in the mid-1500s had California as a peninsula and this showed up on maps by Ortelius and Mercator. The whole idea of California as an island may have come from a 16th century romantic novel. Although one overland expedition (Onate?) in the early 1600s seemed to think the channel existed, it could have just been flooding that filled the Salton Sea basin. The first such map showing Californa as an islandwas by a Dutch mapmaker named Colijn if my memory serves me. But there is the story that a Dutch privateer captured a Spanish ship with a map showing it as such. So while it might be geologically possible, my opinion is that California as an island was more fanciful.

I would think there would be some sort of geologic evidence proving this out readily available on the surface...

You are right, there would be all kinds of evidence, and there is not a single piece of evidence supporting this. Not one iota (but note what today's date is).

You got me Garry. Halfway through the article when the disbelief finally kicked in and I remembered the date. Good job.