Scenes from a Superbloom (Part 2), and Evidence of a Snowball Earth (in Death Valley???) 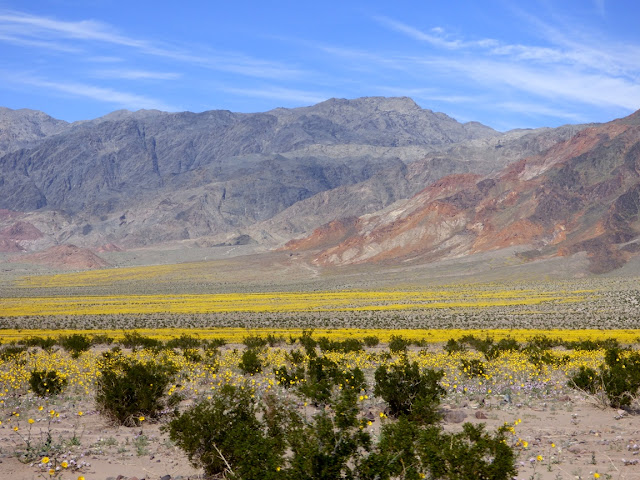 Death Valley is a wondrous place at any time of the year, although it can be darned uncomfortable. There is value, however, in understanding the limits of human existence, which is something you indeed experience when the temperature reaches 120 degrees or so. I prefer visiting at times other than summer as a rule, and late winter is often ideal. We've been bringing students out here in February for more than a quarter century, and I never get tired of seeing this place. 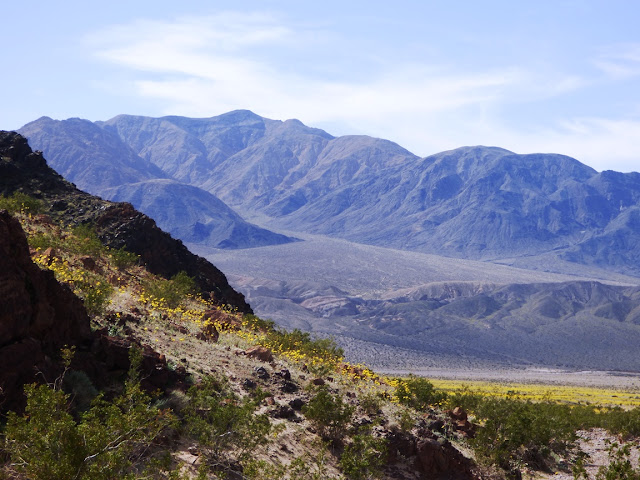 But every decade or so, events conspire to turn a journey to Death Valley into something very special. The geology is always there and in your face (and in your nose, ears, and shoes). But if there have been a few precious rainstorms spaced just right in the fall, you can experience an explosion of life in the desert. Seeds that have lain dormant in the thin soils for years will suddenly germinate, and the barren rocks will be painted bright yellow, with lavender and white undertones here and there.
We had driven just a few miles past Ashford Mill for a chance to look at some of the rocks from the earliest history of the North American continent. Around a billion years ago, an earlier supercontinent (called Rodinia, not Pangea) was stretching and started to fracture and break up. A series of fault basins developed in what is now Arizona, Utah, Montana, and here in Death Valley. Sediments filled the valleys, producing a three-mile-thick sequence of sedimentary rocks preserving several hundred million years of Proterozoic history (the time before complex multicelled life came to dominate the ecosystems of Earth). The mouth of the canyon below Jubilee Pass provided accessible outcrops of the three formations, the Crystal Springs, Beck Springs, and the Kingston Peak. 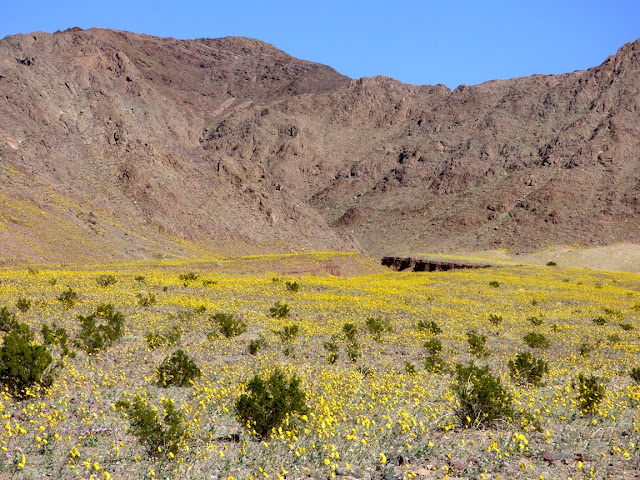 The Crystal Springs formation preserves ancient algal structures called stromatolites. They are the oldest evidence of life in California (but not in the world; life had already been on the planet for two billion years). The Beck Springs formation (in the dark hill below) is composed mostly of dolomite, which formed at tropical, even equatorial latitudes. 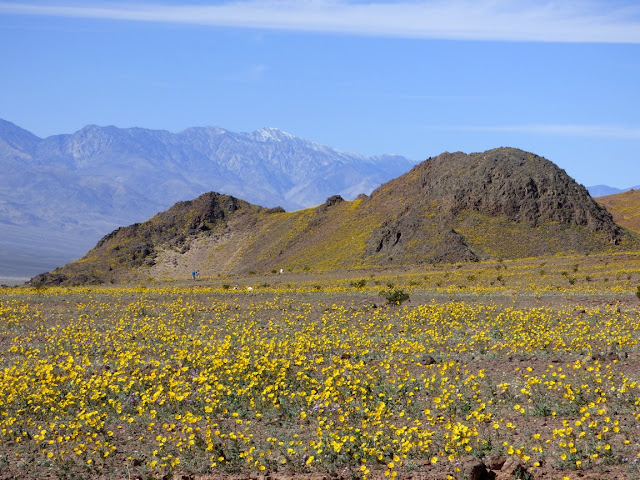 The presence of tropical rocks makes the Kingston Peak formation a real enigma. It's composed in part of a strange conglomerate referred to as a diamictite. The large boulders are in a matrix of muddy sediments such as one might expect to find on the ocean floor. The puzzle is: where did the large rocks come from? Big boulders don't usually get carried far out to sea unless they are encased in icebergs. 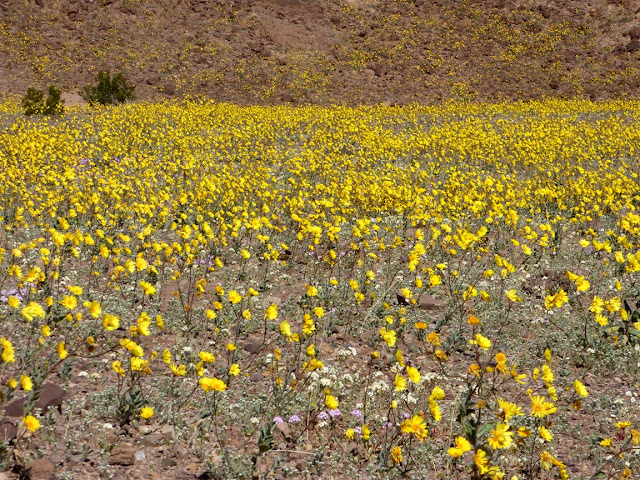 Icebergs? In the tropics? Even the most intense of the ice ages that we've studied from the last two million years never approached the tropics. They barely crossed the northen flanks of the United States. As evidence mounted, geologists started to realize the occurrence of an ice age more intense than any other ever discovered. The Snowball Earth hypothesis suggests that the entire planet may have been covered by ice around 700 million years ago, except maybe for a narrow strip at the equator. 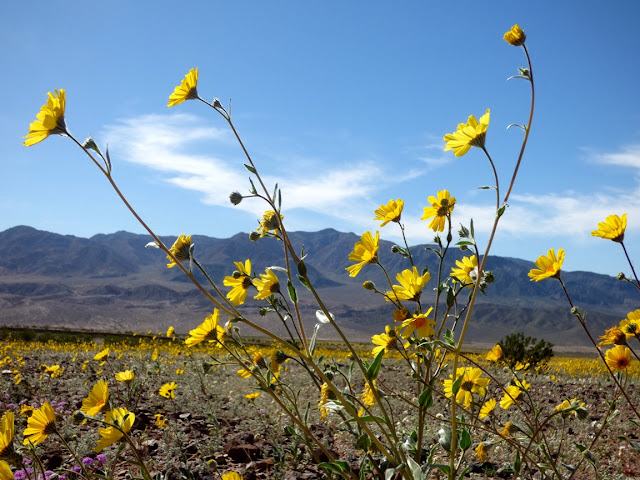 We walked across the alluvial fan for a closer look at the Beck Springs and Kingston Peak rocks, but were distracted somewhat by the incredible flower display. 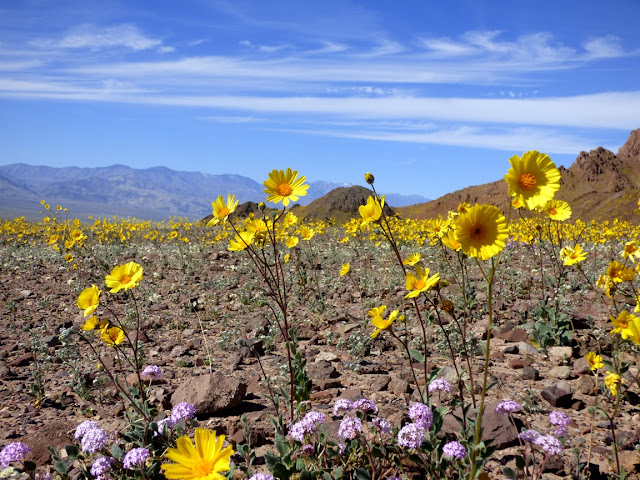 I got down on the ground and tried to get a few shots from a ground squirrel's point of view. If nothing else, the local rodents are able to  look around and say "salad" today! 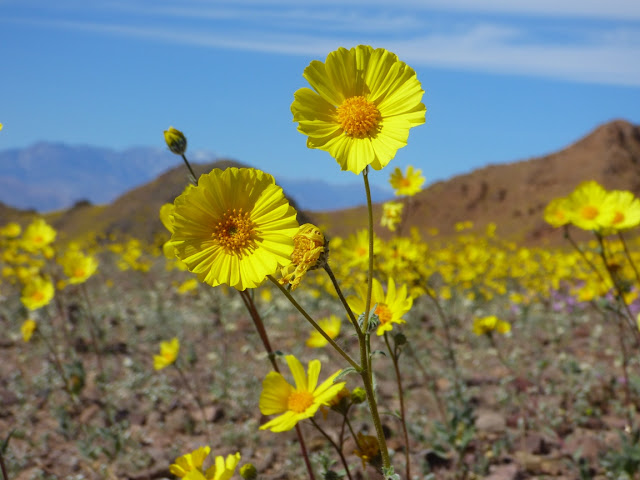 The explosion of life on the barren desert floor was just stunning. These plants are supremely adapted to survive in this most harsh environment, and it was such a privilege to see it happening. 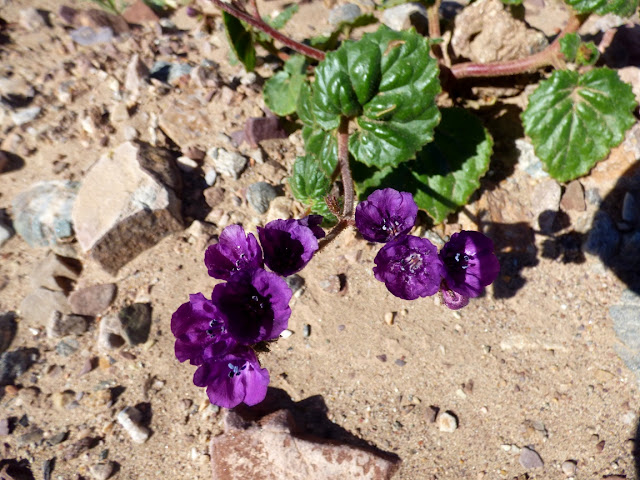 There were trade-offs, of course. The storms that brought the flowers also brought devastating flash-floods that destroyed roads. We couldn't visit some of our normal outcrops, so I had to redesign our itinerary for the next day. That led to a rather fine adventure, one in which we drove through a mountain range. That's "through", not "over". More in coming posts! 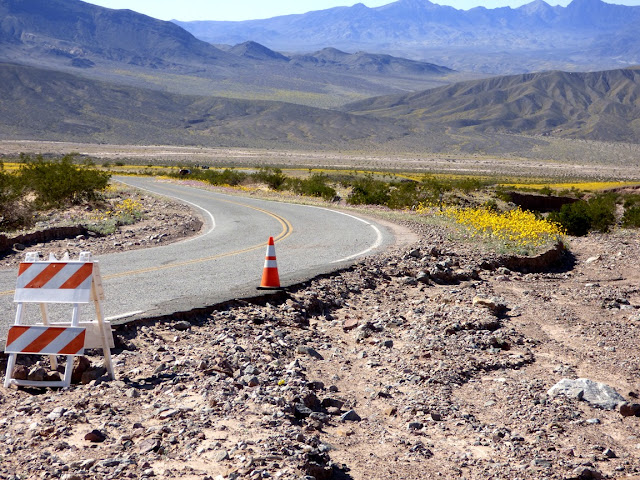