The Age of a Mountain versus the Age of (the rocks of) a Mountain: Arriving in Death Valley National Park 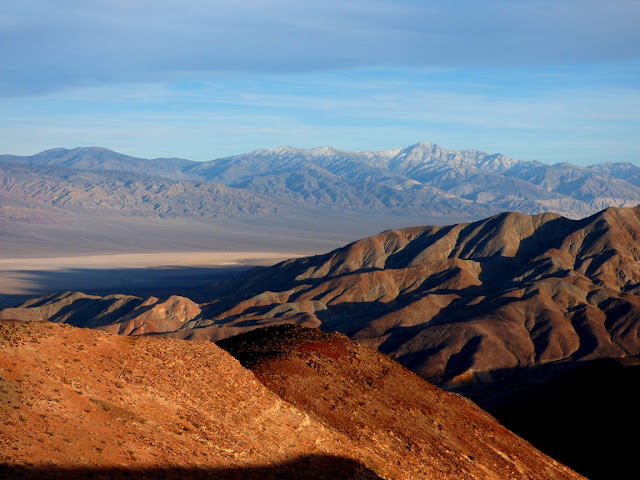 Death Valley is the largest national park in the lower 48 states, and in fact is bigger than several states. It preserves some of the most spectacular corners of the Basin and Range province, a region that extends from eastern California, all of Nevada, and half of Utah. The park includes the lowest place in North America, the hottest place in the world, some of the greatest relief in North America (the difference between the highest and lowest points, over 11,000 feet), and some of the rarest and most endangered animals (the pupfish and others). And awe-inspiring scenery!

We entered Death Valley from the west, driving over the Darwin Plateau at the south end of the Inyo Mountains. Just beyond the summit we stopped briefly at the Father Crowley Vista Point, which overlooks a deep desert valley that isn't Death Valley. It's Panamint Valley, another faulted basin only a bit less deep than Death Valley itself. The setting sun highlighted the rocks exposed across the valley in the Panamint Mountains. Thousands of feet of limestone and sandstone were visible, exposing evidence of more than 100 million years of quiet deposition of mud and sand on the western margin of the North American continent during the Paleozoic Era 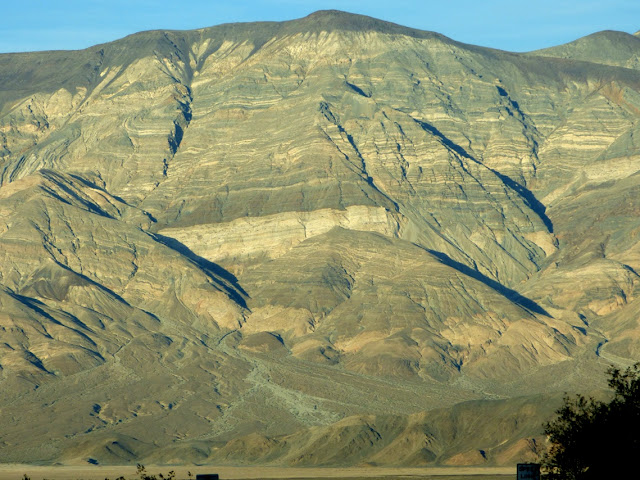 It was a good moment to draw a contrast between the age of a mountain range and the age of the rocks exposed within the mountain range. These are two different things. The rocks of the Panamint Mountains formed over a  period of many hundreds of millions of years, but the mountains themselves are very young (geologically). Lava flows on top of the now separated mountain ranges show that they were once connected, and that the valleys could only have formed in the last few million years. The Panamint Mountains are one of the youngest mountain ranges on the planet! By comparison, the Rocky Mountains are around 50 million years old (with some recent rejuvenation), and the Appalachians are 300 million years old (with a complex story that played out over tens of millions of years). India began slamming into Asia 40 million years ago, forming the Himalayas. The earliest Hominids, had they cared to, could have seen Death Valley before it became an actual valley. 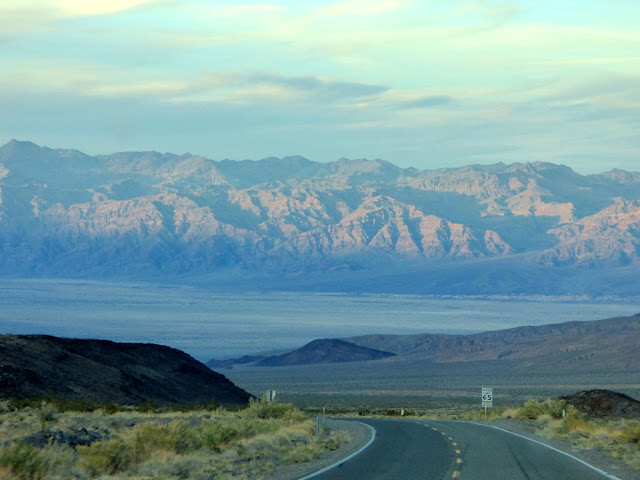 As the shadows lengthened, we crossed Towne Pass at 4,956 feet (1,511 meters), and descended the long grade to our our sea level camp at Stovepipe Wells. We had reached the actual Death Valley. Would there be geology? Would there be flowers? Stay tuned!
Posted by Garry Hayes at 11:45 PM