This spring is shaping up to be an extraordinary year for wildflowers at Death Valley National Park. There have been a series of wet storms (by Death Valley standards) and they have been spaced in such a way as to provide the best possible conditions for germination and growth of plants. Those who have visited Death Valley under "normal" conditions will have memories of barren rocky alluvial fans, naked slopes of bedrock, and a distinct lack of greenery. That most certainly is not the case this year. The wildflower show has started early, and it is robust.

We were in Death Valley over the weekend for our annual geology field studies trip, and one of our traditional stops is an exposure of the Pahrump Group of rock layers at the base of Jubilee Pass about twenty miles south of Badwater. The rocks record the ripping apart of the ancestral North American Continent around a billion years ago, and they are interesting no matter the season. The black hill is composed of Beck Springs formation, a dolomite deposited in a fault trough under tropical conditions. The orange rocks are the Kingston Peak formation, a rock that includes probable glacial deposits. In a tropical, even equatorial setting. These rocks record what may have been the planet's most intense glacial episode, a period when much of the Earth was covered by glacial ice (it's called the Snowball Earth Hypothesis).

But on Saturday, the hills and slopes were alive with Desert Gold and Verbena. And there were lots of green sprouts, promising even more growth in coming weeks. Officials are suggesting this might be one of the ultra-rare "superblooms" that occur over decades rather than years.
Contrast the same spot as it appeared last year at the same time. We found a few flowers hidden in the washes, but clearly there was no explosion of life in that dry year in a place that is drier than anywhere else in North America.

I've been privileged to see just a handful of extraordinary growth years. The only one I have digital images from was in 2005. It provides a nice comparison to what is happening in Death Valley right now. That year was a real challenge as we faced heavy rain and wind for most of the trip. The portrait below illustrates my morning observations that year. I'm thankful that we had perfect weather this last weekend. 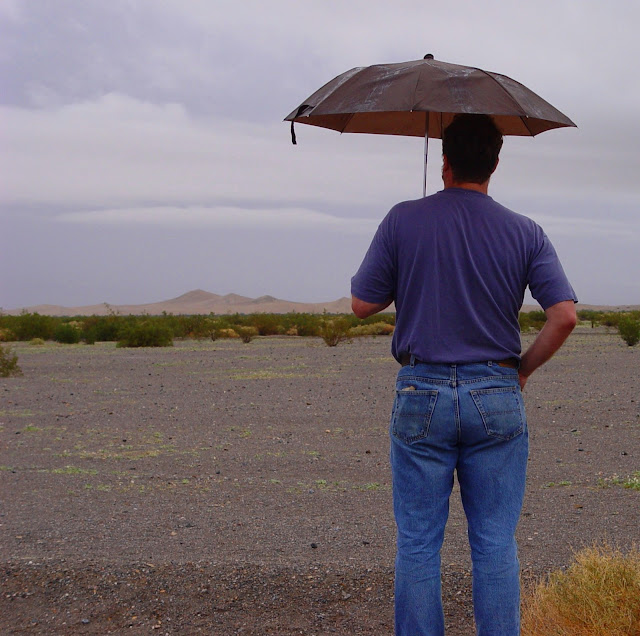 I'm hoping to make a special trip out there in a few weeks to see how things are progressing.
Posted by Garry Hayes at 1:36 PM

I had been hoping and started planning a trip down there this spring, but my experience with post-El Nino springs (whipping winds, temps in 50s to low 60s, and not so much wet as spitting, stinging rain)made me reconsider. Oh well. I'll rely on others for photos, but desert wildflowers are so spectacular, I'm really sorry to miss this.