You CAN See Half Dome from the Central Valley. But You Have to be in the Right Spot

Living in California's Great Valley has moments. Some good, some bad. It's really flat, and that isn't of much interest to a geologist (except the drilling kind). But on some days, when the storms have blown through, and the wind has pushed all of the smog and dust to other places, the valley is beautiful. The best days are when the snow-covered Sierra Nevada are visible in the east.
I live directly west of Yosemite Valley, and the question has come up now and then whether Half Dome, the iconic rock of Yosemite, is visible from the valley floor. Half Dome rises 4,000 feet above Yosemite Valley, dominating the local view. But it is surprising to some to find that it is surrounded by peaks of equal or greater elevation, and as such, it is not easy to see from the floor of the Great Valley. But it is possible, if you are in the right spot...and have binoculars or a camera with a good zoom lens.
That spot is a narrow corridor that runs southwest from Denair through Turlock to Patterson. It's in this location because Yosemite Valley is angled in a southwest direction, providing a gun-sight towards the Central Valley. There are a handful of other spots, but this is the easiest to find. I was out at the junction of Keyes and Hickman Roads this afternoon, and although it was hazy, I was able to pick out the dome from the surrounding peaks. To see it in these photos took a lot of contrast and manipulation (but not of the Photoshop kind!)
The issue arose today because of the absolutely glorious day we had yesterday. A sharp-eyed employee at StanEmergency in downtown Modesto took a photograph of the gorgeous skyline, and in the center of the photograph was a prominent peak that looked a heck of a lot like Half Dome. He or she posted the photo on Facebook (here), and it quickly garnered more than a thousand likes, 800 shares, and more than a hundred comments. I had to do a double take, because that peak was unusual looking. Very Half-Dome-like, so to speak.
I was a little surprised, because I knew the peaks behind Half Dome are much higher, and that Half Dome shouldn't be so prominent from this angle. I had managed to get a shot of the same peak from my neck of the woods in Waterford the same day. I hit the maps, and asked for suggestions from Geotripper readers in my last post (this one). I got a good tip from twoeightnine, who suggested it might be Mount Clark, which would be almost exactly behind Half Dome from the perspective of Modesto.(UPDATE: Almost immediately after I posted this, another commentator, Lucas Wilkinson, posted this from CalTopo that shows that the peak in question is Volunteer Peak, not Clark. I was looking in the wrong direction!)

Mount Clark is 11,522 feet (3,512 meters), almost 3,000 feet higher than Half Dome, and it has a steep northern flank that could easily mistaken for the shape of Yosemite's iconic rock (EDIT: Unfortunately I don't have any closeups of Volunteer Peak!).
Visitors who get out of Yosemite Valley and travel to Glacier Point are treated to spectacular view of the peak. It is a spectacular mountain, a marvelous example of a glacially carved horn, surrounded by glacial cirques, the bowl shaped valleys where glaciers originated (EDIT: If only I'd been right! But Clark is a pretty mountain). 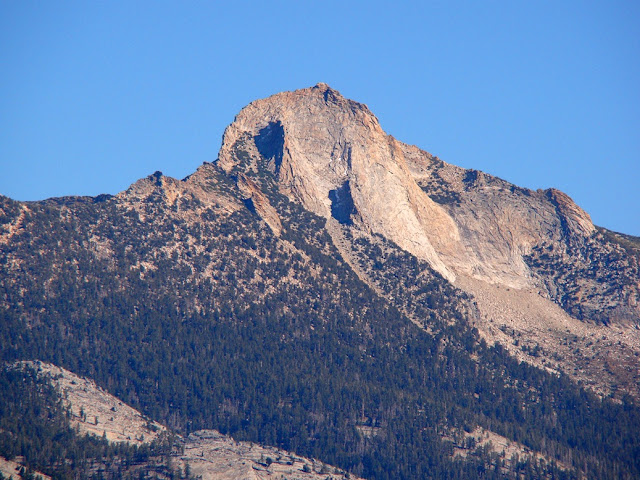 It's really something that so many people took an interest in their geologic surroundings. And it was so nice to have such a dramatically clear day. We could use more of them. And thanks to StanEmergency for posting a great picture and mystery project!
Posted by Garry Hayes at 11:08 PM

I remembered reading this post so when I saw this I had to share it. Yesterday Half Eom3 was visible from Mt Hamilton I've seen the Sierras from the East Bay hills on a few clear winter days, but this is ridiculous. Thanks for the blog! https://www.reddit.com/r/bayarea/comments/as5fc3/you_could_see_across_the_central_valley_from_lick/