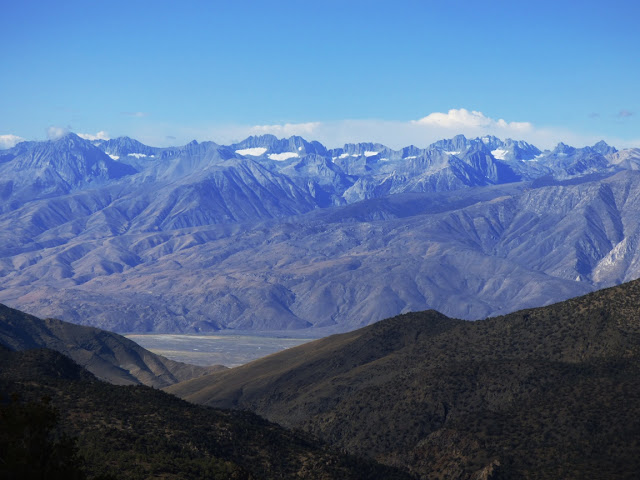 I wandered past our department seismometer (at Modesto Junior College in central California), and noticed some disturbances that didn't look like the record of students jumping up and down. They indeed turned out to be a pair of moderate earthquakes of magnitude 4.8 and 4.3 with an epicenter about 7 miles (10 kms) WNW of Big Pine, a small village in the Owens Valley east of the Sierra Nevada. A 4.8 magnitude can be a pretty sharp jolt, but this is a sparsely populated area, so I don't expect to hear of much in the way of damage.

The epicenter is just north of the Palisades Group of peaks on the eastern boundary of Kings Canyon National Park. They are the snowy glaciated peaks in the picture above. Big Pine is just to the left of the picture on the valley floor.

The fault that produced the quake shows right lateral strike slip motion. This means that the two sides of the fault moved sideways relative to each other, with the southwest side of the fault moving northwest. Since the Owens Valley is a fault graben, one might assume that the fault motion should have been vertical, i.e. lifting the mountains or dropping the valley, but the Sierra Nevada as a structural block is moving northwest relative to the rest of the continent, so this quake is consistent with that motion.

The regional is seismically active. One of California's great historical earthquakes had an epicenter a short ways to the south at Lone Pine. The 1872 event had a magnitude estimated to be  as high as 7.9. The quake killed 27 people, nearly a tenth of the population of the village at the time. Ground ruptures extended from Owens Lake to north of Big Pine.

Our seismometer is a simple classroom instructional model (from Wards Scientific), but we get good results with local quakes of moderate magnitude, and larger quakes worldwide. 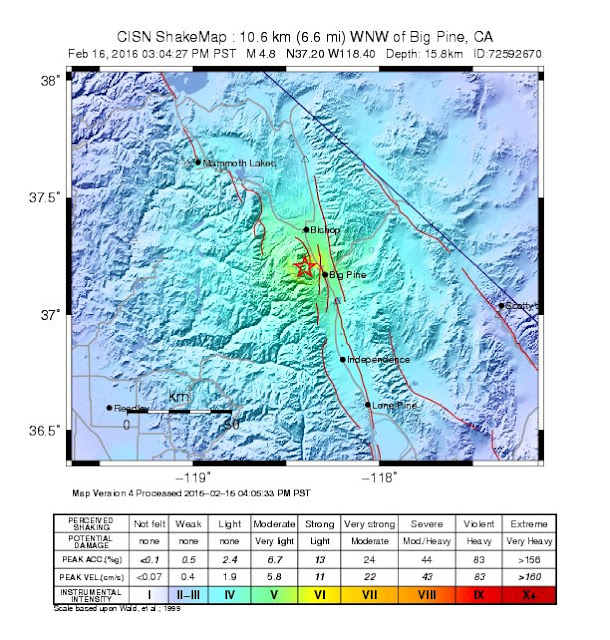 The U.S. Geological Survey event page for the magnitude 4.8 quake can be seen here: http://earthquake.usgs.gov/earthquakes/eventpage/nc72592670#general_executive
Posted by Garry Hayes at 4:49 PM

Is the area between the two Owens Valley faults "the Walker Lane?"

It is on the western edge of the Walker Lane. The Lane is a larger belt of right lateral faults that spread over several valleys.