A Meadowlark is singing in the breeze...it's early February in California which actually means that spring is practically here. In other places, biplanes are spraying pesticides and fungicides, beekeepers are setting out hives in the almond groves, and fields are being plowed and readied for planting. About 95% of the floor of the California's Great Valley is being readied for crop production, with some hopes that the larger snowpack will allow irrigation allotments for the first time in a number of years. 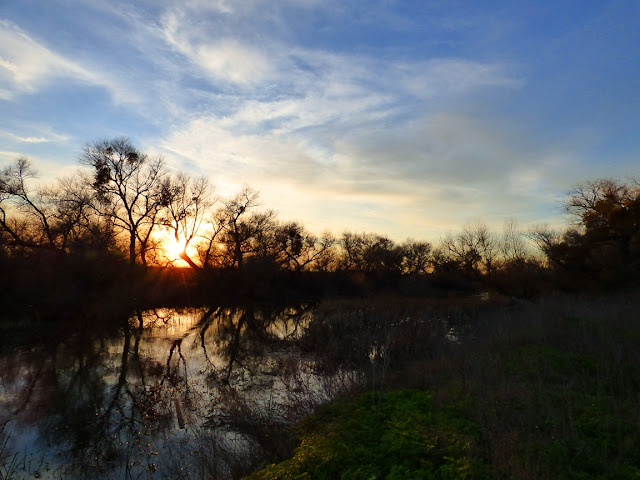 But not here. I spent the afternoon on a deserted road that traveled around the Tule Elk habitat at the San Luis National Wildlife Refuge. Nothing human was happening here. On this old floodplain of the San Joaquin River the native grasses were sprouting bright green shoots, and the elk were grazing in the distance. The Salt Slough was flowing, and the water was uncharacteristically clean. Dozens of Meadowlarks were singing their alluring songs, and numerous hawks, the Red-shouldered, the Red-tails, and Harriers were patrolling, looking for ground squirrels emerging from their burrows.

On this small patch of valley floor, environmental managers of the Fish and Wildlife Service are trying to restore a bit of the valley to something that resembles the land the once provided food and shelter to millions upon millions of birds, mammals, reptiles, amphibians and many others. The Great Valley was once America's Serengeti Plains, one of the richest wildlife habitats on the planet.

I haven't said much about the criminal drama that unfolded last month at the Malheur National Wildlife Refuge. I was waiting for some kind of resolution. Four of the terrorists are still holding out at the refuge wondering where all their brave "patriot" friends are, so the situation remains unresolved. But sixteen of the gun-toting thugs are under indictment, and LaVoy Finicum lies dead in the ground, a self-appointed "suicide by cop". Some people are calling him a patriot and a martyr. I call him a common criminal who ran a roadblock and then tried to draw a gun on law enforcement officers.

This isn't opinion, this point of view is a matter of law. People decided to take up arms against a duly elected representative government and tried to effect political change with guns. These were criminal acts that followed years of threats and intimidation. These people can try to pretend they were following some bizarre interpretation of the Constitution, but the Constitution makes clear that the powers of government do not lie in the hands of people with guns trying to steal public land for their own private use.

I'm not sure these people even understand the principle of civil disobedience that brought about the Civil Rights Act and the Voting Rights Act. In that era people broke the law on purpose, but they expected to be arrested and were ready to be imprisoned to bring about legal changes in the country. They didn't carry heavy weaponry and threaten to kill public officials. They instead paid a heavy price themselves, even to the point of death in too many cases.
But most of all, I'm enraged that these people think that they somehow deserve unfettered free access to land they have no claim to. The states of the American West ceded control of these lands as a condition of statehood. They received trust lands as part of statehood, and almost without exception those state lands are wasted, denuded, and closed to public access (read the story here from High Country News). The efforts of the federal government to administer the remaining public lands has been a patchwork of success and failure, but on the whole there is a recognition that these lands belong to all of us, and should be treated that way. Sometimes the use involves resource extraction and profits for certain groups and corporate entities, but much involves the public good. 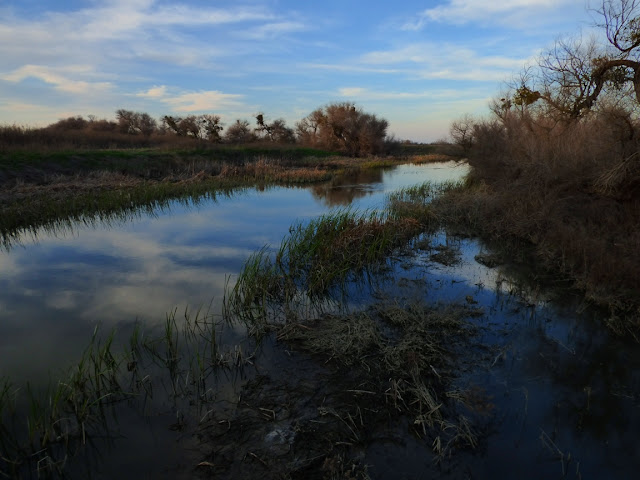 Private landowners are often responsible and are responsive to efforts to preserve part of their holdings for wildlife. But they can't be expected to understand and act on the fact that their portion of the landscape is a small piece of a wildlife network with connections from the far northern Arctic to the tip of South America. Only the federal government can do this, and its role in wildlife management is both legal and supported by the vast majority of the citizens of our country. Only the federal government can provide protection for the breeding grounds of migratory geese and cranes in the far north and at the same time provide wintering grounds in California and other parts of the southwestern states. Only they can provide resting places for the birds at refuges between the two extremes of the migratory routes. And only the federal government can enter into diplomatic agreements to protect animals whose migratory pathways carry them over international borders. 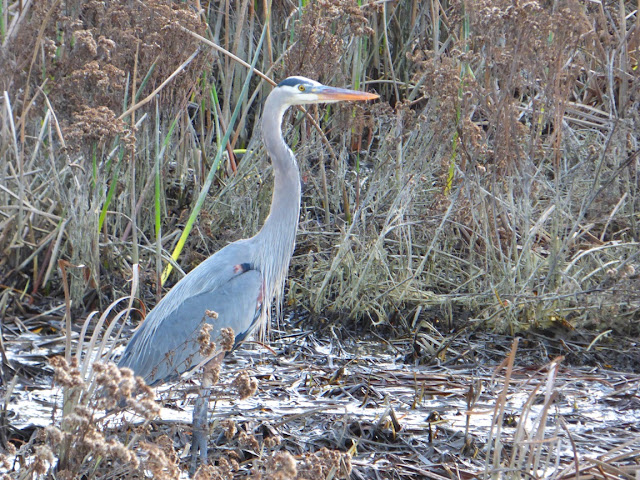 Federal management of grazing lands has not been perfect, but there are many examples of cooperation between different stakeholders in the debate. The vast majority of ranchers are law-abiding citizens. But those who decide to take up arms against the government must be dealt with proportionately. Anyone who threatens the life of another, and acts on that threat needs to be in prison, and their weapons taken away. The moment these criminals brandished guns they lost their place at the table. 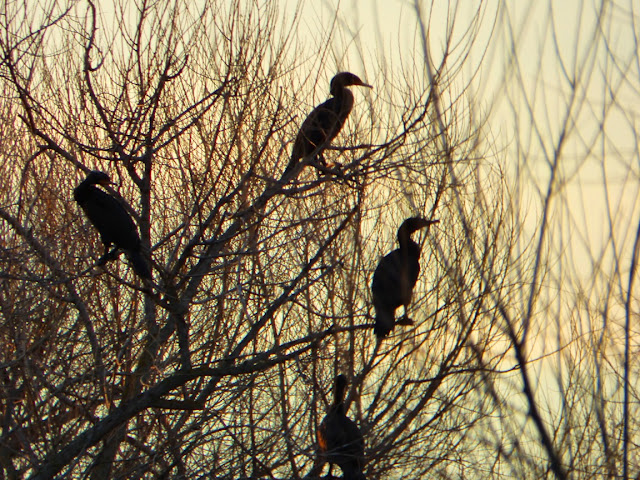 It was a beautiful day today at the San Luis National Wildlife Refuge. I could wander over the grasslands and imagine how this valley once was. So much has been lost, but much still remains, and it was both a privilege and a right to be there on this really early "spring" day. I salute those who work at these refuges and who are fighting to do the right thing, sometimes in the face of threats and intimidation. Thank you for the good work that you do.

The San Luis National Wildlife Refuge protects the floodplain of the San Joaquin River between Turlock and Los Banos in California's Great Valley. There is an excellent visitor center, and a number of available auto tours and hiking trails. For more information, check out their web page: http://www.fws.gov/refuge/san_luis/. 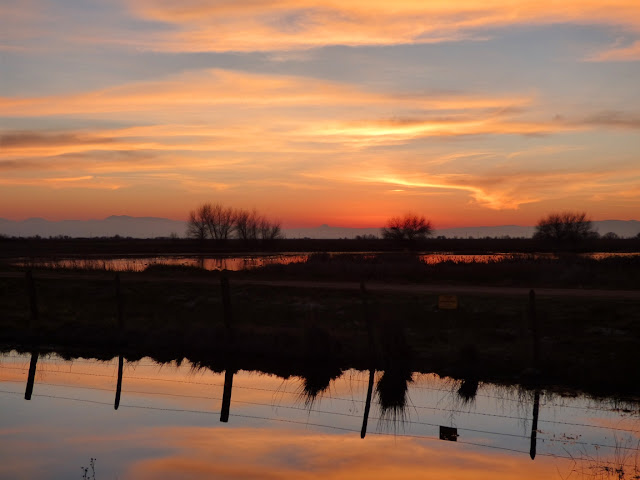 Excellent. I am glad you said it. I agree wholeheartedly. Most of my best traveling memories include the visits to these refuges.

It's a beaver. We have a family of them maintaining an over-dam at a local stormwater retention pond (near Sacramento), frequently popping out for a look around. The pond was probably intended to be lower when it's not raining, but it all still works. Unfortunately, the beavers have pretty much stripped the surroundings of anything but manzanita, oak, and a few sycamore (guess those aren't very tasty) so they're mostly building with reeds/rushes now - with predictable results (probably good, from a flood control and dam safety standpoint) when it does rain.