Cartoons Come to Life: The Value of Field Studies at Red Rock Canyon 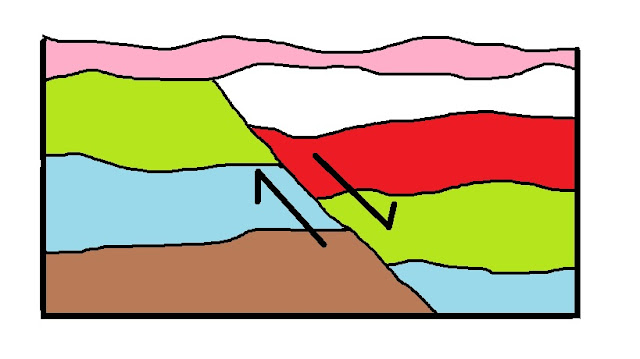 I spend a lot of time in classrooms drawing cartoons. Lots of them, diagrammatically representing folds, faults and stratigraphy, trying to communicate to my students how these structures tell the story of the Earth. The problem for many of my students is that these are just cartoons. Cartoons on Saturday mornings (do ANY of you remember when that was the only time one got to watch cartoons?) do represent life in a way, but only if you have a real life to compare them to. And that's the problem for many students these days. They have no real-life experiences in the outdoors with which to compare these drawings. 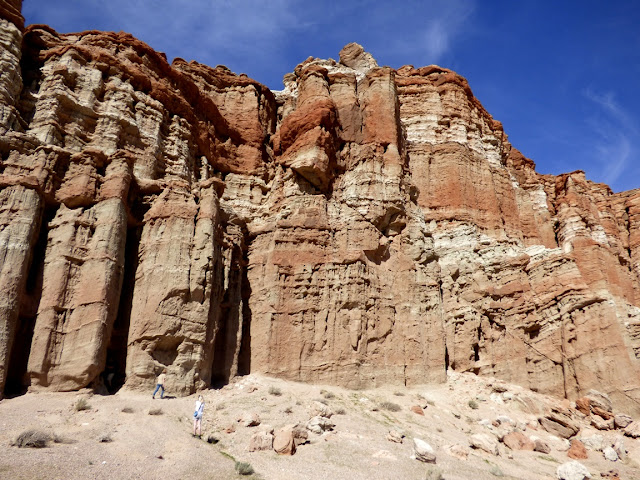 And thus, the value of a field studies course. There is nothing quite like having the privilege of standing beneath a cliff, enjoying and appreciating the scenery, yes, but also being able to understand the story it tells. Our trip to Death Valley a few weeks ago included a fossil hunt at the first stop, but our second was a site where basic principles of geology stand out in stark relief, without a need for a chalkboard cartoon (I forgot the chalkboard this trip anyway). We had arrived at Red Rock Canyon State Park in the Mojave Desert. Just stepping out of the vehicles presented us a cliff face that was a physical representation of the diagram at the top of the post, a series of brightly colored layers of sand, siltstone and volcanic tuff transected by a fault. 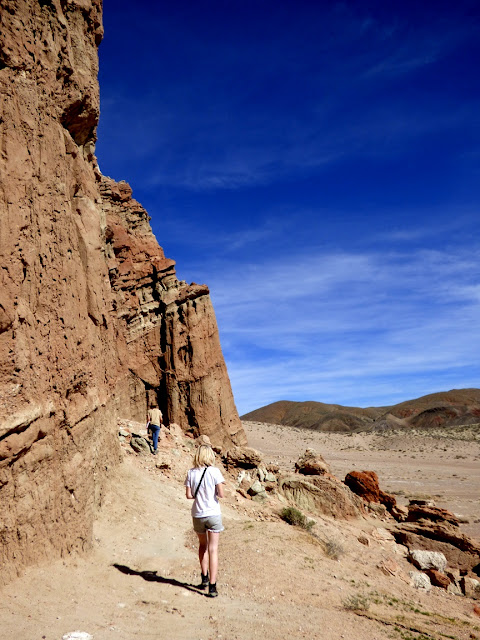 The order of the layering provides a fine example of "superposition", the principle that layered rocks are stacked oldest to youngest, unless they have been overturned. This is one of the earliest principles of geology, described originally by Nicolas Steno in the 1600s. Looking east along the cliff we could also see the physical manifestation of another Steno principle, that of original horizontality. Most sedimentary environments produce horizontal strata (think floodplains or lakes, or shallow seas). If layers are tilted, some kind of force has acted on them, and being here in southern California, faults might be at fault. 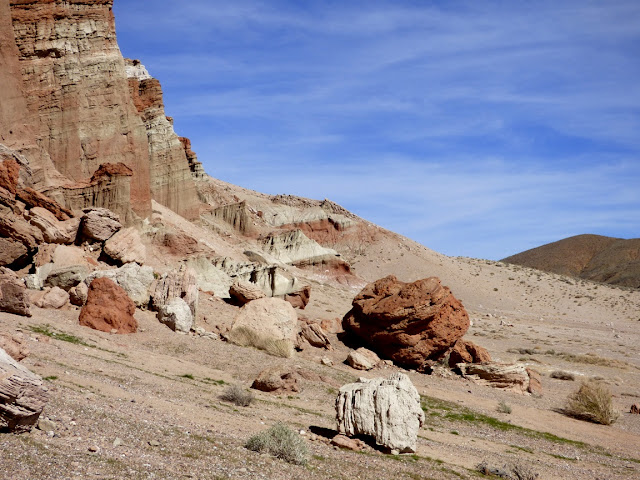 A discussion of these basic principles was followed by a short "mapping" project. We weren't quite to the proficiency of working with maps, but the students set out to propose how they would organize the layers into formations and members that could be used to tell a logical story as to how these rocks could have come to have the structure and appearance they have today. 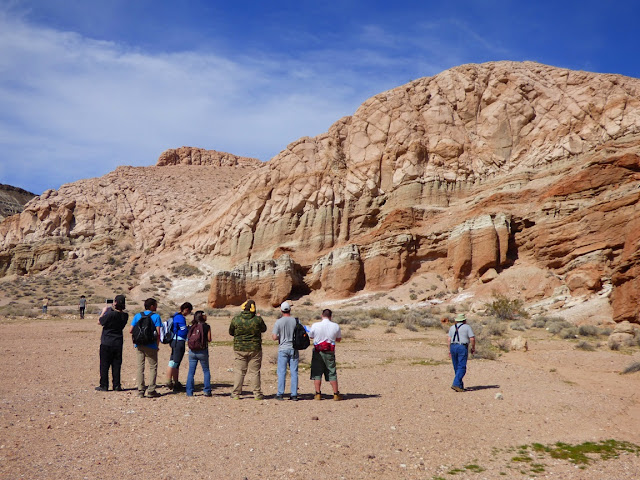 Red Rock Canyon does have a fascinating story as it turns out. The red and brown layers, called the Dove Springs Formation, record deposition of silt and sand in river floodplains and ephemeral lakes between 12.5 to 7.5 million years ago. The semiarid savanna environment supported a diverse ecosystem that included extinct elephants (gomphotherium), ancestral rhinos, three-toed horses, giraffe-like camels, saber-toothed cats, and bone-crushing ancestors to the bears and dogs. There are also numerous smaller fossils like ancestral skunks, alligator lizards, and shrews, with a total plant and animal species count of more than one hundred. The ecosystem suffered the occasional catastrophe as it was buried by volcanic ash. Basaltic lava flowed across the region. 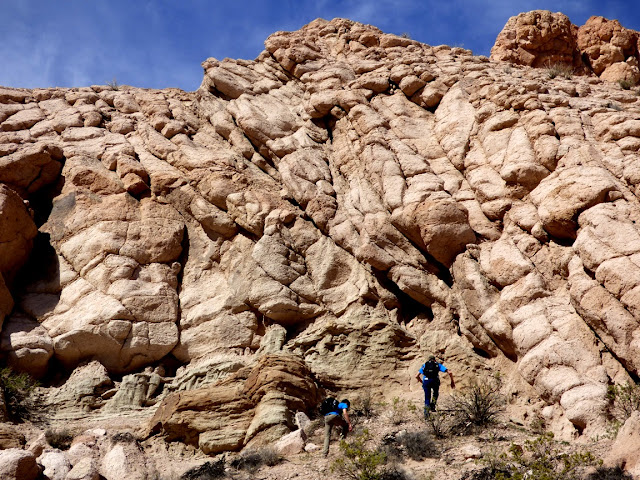 One of the student's discoveries was a somewhat less visible fault that shifted the layers. It was a great introduction into the mind of field geologists, seeing the world the way earth scientists do. It was an interesting spot, but there were many more to come on the road ahead. 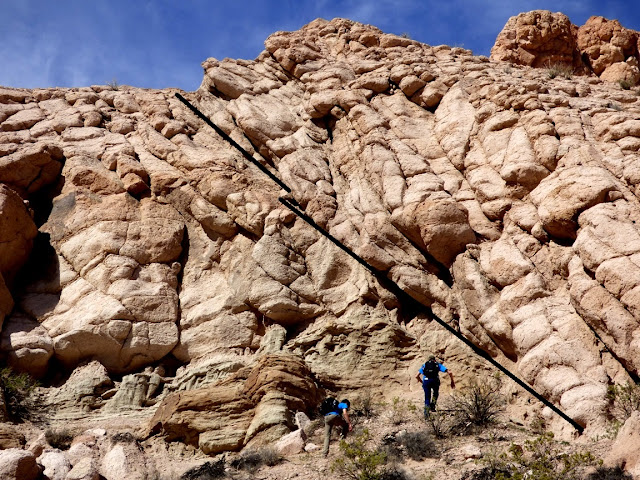 Speaking of roads and cartoons come to life...here's the Roadrunner (pic is actually from Joshua Tree National Park).... 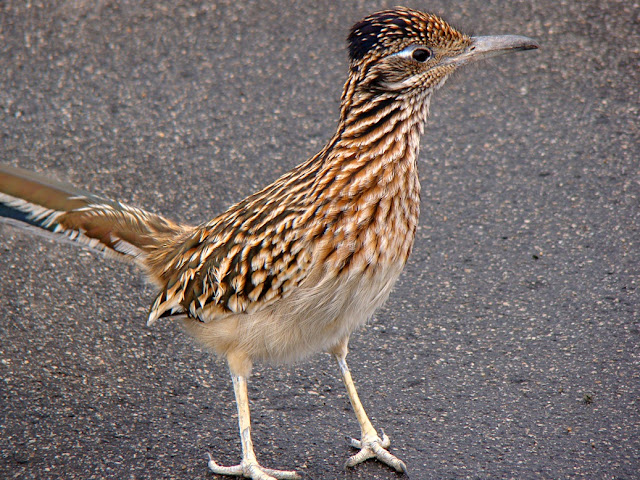 ...and Wiley E. Coyote. Despite living in the most desolate driest place in North America, it looks like this one has actually caught a few roadrunners! Seriously, this coyote lives only a few miles from Badwater, the hottest and lowest part of Death Valley. 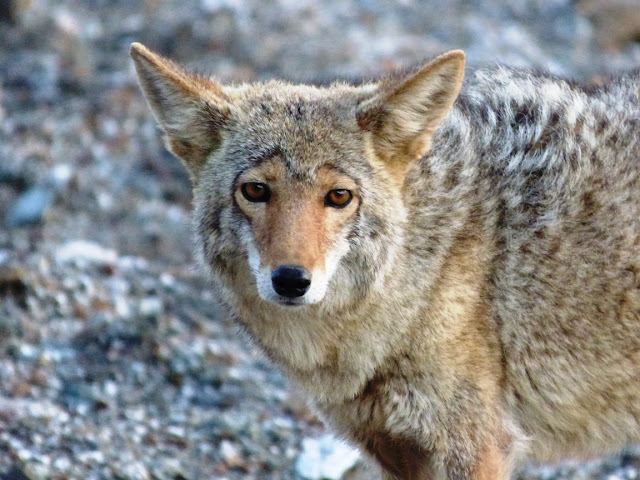 Beautifully done! On point with the field work: It is what gets most people interested in geology. Keep up the rock show!