Green and White in California...There's a drought here? Why yes...yes there is 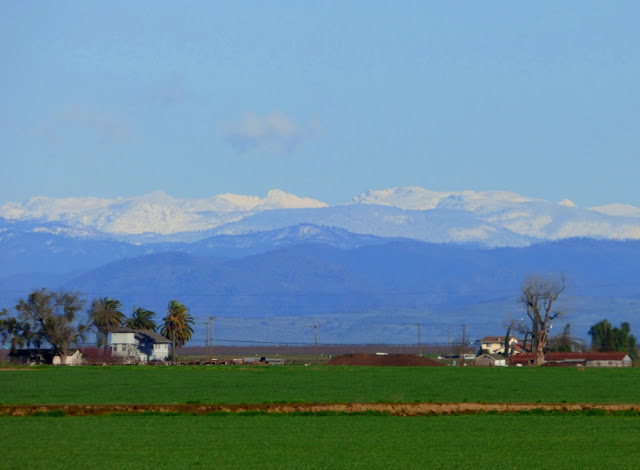 What a sight for sore (and dry) eyes. Deep emerald fields of growing grass, and snow-capped peaks in the distance. Tropical palm trees. Spring? Hardly. It's the first of February in California, a place mired in the depths of the worst drought in perhaps a thousand years. Somehow, the picture doesn't fit with the reality, but it unfortunately does.

I was headed home this afternoon and the passing storm had cleared the air in our valley, exposing the Sierra Nevada near Yosemite National Park in all its glory. I believe we are looking at Mt. Hoffman on the right and Mt. Conness on the left (I am open to other opinions, maybe Matterhorn Peak on the left?). I was looking east from the latitude of Milnes Road east of Modesto. Lots of snow up high, growing fields below, and puddles and mud everywhere.
It's certainly not the lack of rainfall. I've been following precipitation in my small town of Waterford in California's Great Valley since 1991, and we've had three great months in a row, 2.82 inches in November, 2.6 inches in December, and 5.3 inches in January (5th wettest January in 25 years, and compared to 0.0 inches last year). We have reached 11.10 inches for the water year, the wettest in all but three of the last 25 years by the first of February (only the El Nino years of 2005 and 1998, and 1995 exceeded this amount). If not a single drop were to fall the rest of the year, this would still be wetter than seven of the past 25 years. But more rain is likely, as El Nino remains a powerful influence in California storms, and there are three more months left in the rainy season. 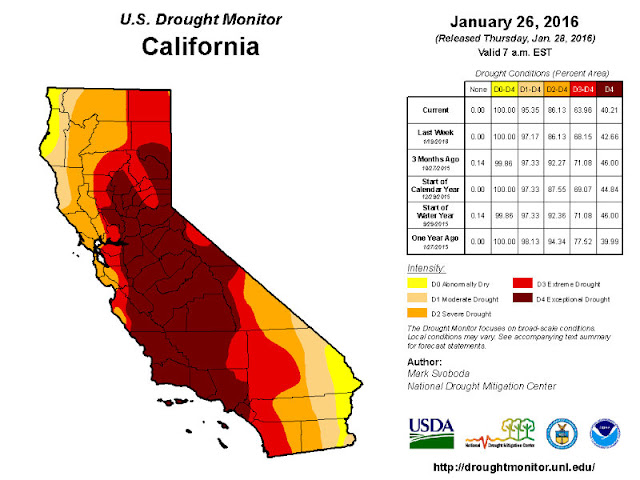 The snowpack reports are the best in years, ranging from 107% to 120% in the Sierra Nevada and Cascades. Last year? We ended up with a snowpack that was less than 10% of normal.

So how can the drought maps be practically unchanged from several months ago? All of the state remains in drier than normal, and 40% of the state remains in "exceptional" drought. How can this be? It's because we fell so far behind. If the breadwinner in a household loses his or her income, the family will live off of savings for a while, and as unemployment drags on, the family starts using the credit cards. They get into a deep financial hole. When money starts to come in again, basic needs are once again met, but it takes a long time to build up the savings and pay off the credit cards. That's where we are in California right now. Water is returning, but the reservoirs are exceedingly low, and even worse, groundwater has been overdrafted like never before. 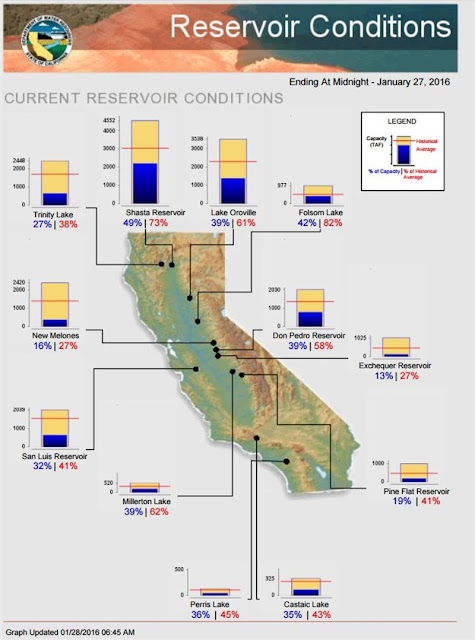 A family has one out, a do-over of sorts. Bankruptcy. They could start over with a cleared financial slate. But when it comes to water and California, we don't have that option. We have what we have, and it's going to take a lot more water from the skies to get us back to "normal", if such a climate condition exists anymore.

I think its Conness.