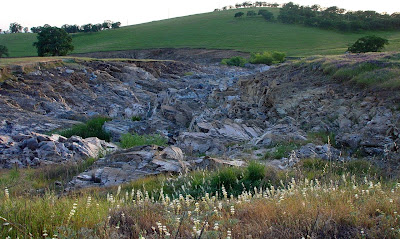 In January of 1997, the Tuolumne River basin experienced a disaster. Two factors, each astounding in themselves, converged to produce an unprecedented event, a 200-300 year flood. After a record-breaking December, a huge snowpack had built up in the Sierra Nevada watershed at Yosemite National Park. Then a very warm "Pineapple Express", a tropical storm coming off the Pacific Ocean, arrived from the southwest. Rain was falling at 10,000 feet...in January. And it was a LOT of rain, as much as three feet in places. The snowpack quickly melted, and vast amounts of water were headed downstream. 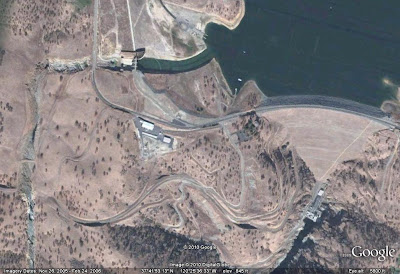 Downstream, in Modesto, the Tuolumne River officially reaches flood stage at around 9,000 cubic feet per second. Upstream, something like 130,000-140,000 cubic feet per second was flowing into Don Pedro Reservoir, the primary flood control facility on the river. Although the dam was apparently at the proper level for normal year flood events, this event was magnitudes beyond anything they were prepared for. The lake, with 2 million acre-feet of storage, whose variations might be measured in inches per day, started rising a foot per hour. They had all of 18 feet of freeboard before the dam would be overtop and start flowing uncontrollably. The decision was made to open, for the first time, the emergency flood gates. A giant river was about to be unleashed on a meadowland that had never before had a river flowing through it.
Over the next few days, a new canyon appeared. The overlying soil was quickly washed away, and the rapidly moving water quarried out jointed blocks of metamorphic rock and carried them away as well. The resulting channel can be seen in the pictures above. It is forty feet deep in places. In Modesto, 185 homes were flooded, several bridges were damaged or washed out. The discharge in town was about 70,000 cubic feet per second. It is scary to think of what could have happened if there had been no flood control on the river. 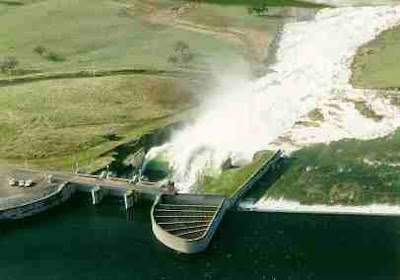 (picture source here)
I bring this up today because of a strikingly similar event that took place in Texas in 2002, and was discussed by Brian over at Clastic Detritus. Brian comments on how events like these inform us of one of fundamental principles of geology, uniformitarianism, and how the principle is so often misrepresented by young-earth creationists. 4.5 Billion Years of Wonder also chimes in with an excellent discussion about the Texas event, and some warnings about how the findings will be misused. It is so easy for researchers to have their work misrepresented. These posts are well worth your time!
Posted by Garry Hayes at 9:51 AM

Oh nice. I hadn't heard of this event before. Interesting stuff. And it's definitely got its similarities to the Texas flood event.

...therefore we know NOTHING about the Grand Canyon! AHAHAHA

How true that we really know nothing about the Grand Canyon, except the age of the deposited rocks.

How about projecting the flow on the Tuolumne from the 1861-1862 floods? I asked the MID board about it and they said it's not their problem.

Tearing down straw men will not help us get to the truth of the matter.
1. Some catastrophists claim that uniformitarianism ONLY uses very slow processes that we now see in operation - no catastrophes allowed. STRAW MAN

2. Some uniformitarianists claim that catastrophism ONLY uses catastrophes - no slow gradual processes allowed. ANOTHER STRAW MAN

Let's be careful about how we present one another's ideas before we start dismantling them.

I don't believe that all factors have been taken into account, either. Though there are the natural factors, there are the man-made. As are to the worst of seeng the coming, and fail to realize the cost of life in the balance. Though there is the failing of the infrastructure, in a host of ways; from the misuse and mis-structured use of infrastructure funds, to the mis-informed and adversely informed entities, which have no truth or progressive bearing principles besides those of monetary gain. That is the dilemma.
The only redeeming is that the governmental funds drawn are usually based in the factors upon which they were drawn. The only reason why there is no notable endepth look at the funds disbursements in an open fashion, unless a maneuverable discredit is availed.

Hi, I just found your blog and I love it! I read geology blogs constantly. I'm a retired psychologist. Geology has been my hobby for the last sixty years along with Botany and Quantum Physics. I'm just constantly curious. I am now disabled so blogs like yours allow me to go to places I can't reach with this body anymore. I am deeply grateful that you produce this blog. I Thank You deeply. Steven Doyle