The way it was today: Yosemite Valley 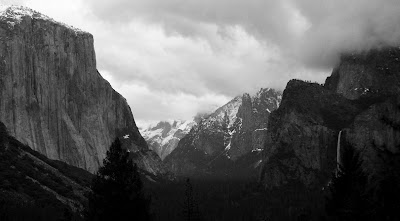 My field studies course took in Yosemite Valley and the Merced River today; we had about 18 students, at least four of whom had never been to Yosemite before. It was a beautiful day in a sense, but challenging for photography; it was overcast and gray, and all the colors were muted. Even worse, the contrast between land and sky was almost impossible to compensate for. I've had to either remove color entirely (black and white) or saturate the colors almost beyond the reality of the day. Our first stop was the famous tunnel view. The parking lot was nicely renovated, but the view is much as it always has been: spectacular! Half Dome was hidden in the clouds. 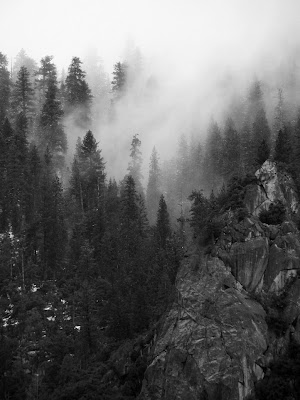 I calculated recently that I have been to Yosemite Valley at least sixty times in the last twenty years, yet I never tire of the place. When you have seen the iconic domes and cliffs and waterfalls this many times, you may find your eyes wandering from the familiar outlines, and looking for the unfamiliar; I was captured by the cloudy mist flowing down a section of the Rockslides, a slope ignored by most people at the Tunnel View. 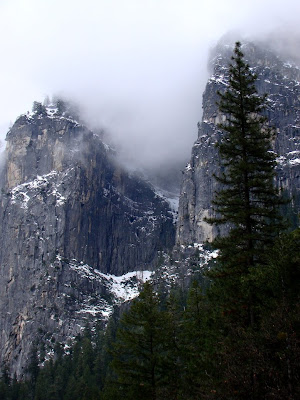 There are cliffs at Yosemite Valley which seen in isolation would merit attention at any other place in the world, maybe gaining some special status as a park or monument. Here, these spectacular cliffs have a name, but I had to look it up: the right-hand cliff is Stanford Point. Bridalveil Fall plummets 620 feet over a sheer cliff. This classic glacial hanging valley is famous enough to merit a crowded parking lot and trail, but I found myself drawn to the huge cliffs that surround it. The high tower in the background is one of the Cathedral Rocks. 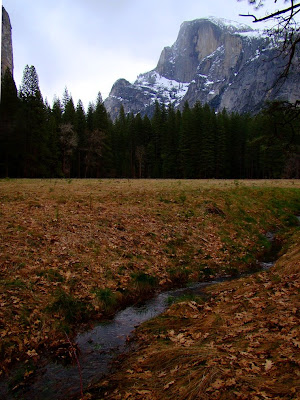 The valley today was on the cusp of a spring eruption. Green shoots are just beginning to show in the meadows, but the winter snows still cling to the high country. The waterfalls are flowing, but nowhere near the discharges that will be here in early May. We've come through three tough drought years, but this year the precipitation was almost normal, aided in part by El Nino conditions in the Pacific Ocean. It won't be enough to fill the half-empty reservoirs but the soil water may be replenished enough that more trees will be able to resist when the pine beetles attack...
Posted by Garry Hayes at 11:33 PM

Love the mist on the Rockslide!

Great post. I really enjoy seeing "the other side" of out National Parks. When in Arches and Zion this summer, we made it a point to ignore the most well known places and look around the lesser known. It was an excellent decision.

yosemite is where my heart is always. thanks for the recent photos and updates to my favorite place.