The Other California: Caught in the Vise (the Western Mojave Desert) 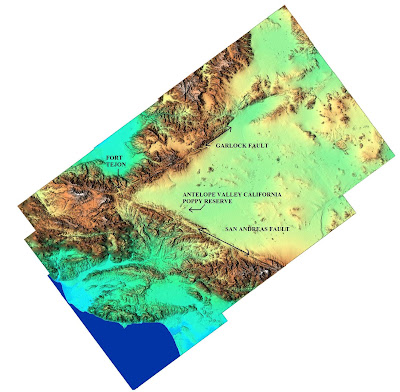 The western Mojave Desert is a little-known corner of California, except during the late winter and spring when parts of the desert come alive with Golden Poppies, Lupine, Goldfield, Cream Cup, and Desert Larkspur. Now, my readers know that I would NEVER stoop to thinking up some geology to talk about just so I could show some pictures of flowers from my trip through the area last week. So feel free to ignore any flowers that just happen to impose themselves between you and the very important mountains that make up the horizon of the pictures below.

The western Mojave is the relatively flat triangular region lying between the Garlock and San Andreas faults (see the NASA image above). The Garlock is a fault that few Californians hear about. It has not produced a major earthquake in perhaps a thousand years, with the largest historical quake being a 5.7 magnitude event in 1992. It is thought capable of producing much larger tremors, as high as magnitude 7.6 . The Garlock is a left lateral fault (the side opposite the observer moves to the left) that has shifted as much 40 miles. 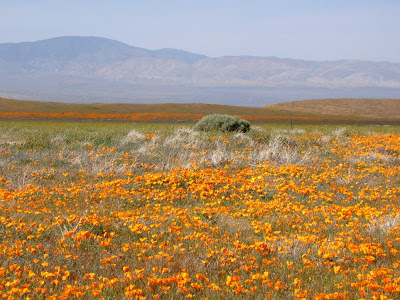 In the picture above, the Garlock fault lies at the base of the Tehachapi and El Paso Mountains in the far distance. The Tehachapis are composed of granite and metamorphic rocks, and make up the southern "toe" of the Sierra Nevada. 4,000 foot high Tehachapi Pass (below) is a major transportation corridor between northern and southern California, including the last railroad crossing over the Sierra Nevada for some 300 miles (the next crossing north is at Donner Pass near Lake Tahoe). 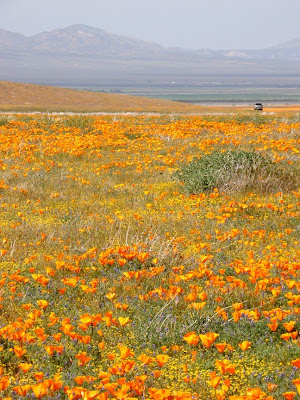 The more familiar San Andreas fault is the 600 mile long transform boundary that divides the North American plate from the Pacific Plate. It was been responsible for two of California's biggest earthquakes: the 1857 Fort Tejon quake and the 1906 San Francisco tragedy. The area southwest of the fault is moving northward about 2 inches a year, breaking loose in large earthquakes every two or three centuries. In the picture below, the San Andreas lies just over the ridge in the distance. 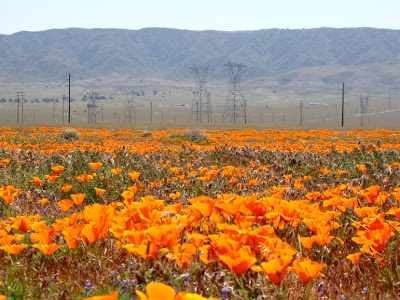 I wrote about the Antelope Valley California Poppy Reserve in a previous post, so I won't add much here other than to say that the low hills of the preserve provide a wonderful view of the landscape produced when two major fault systems converge on each other...especially in spring.

The Other California is my continuing series about the less familiar parts of the state that don't usually show up on the postcards. I am cheating just a little because poppies show up on almost ALL the postcards. And yes, the picture below is just simply a gratuitous flower picture... 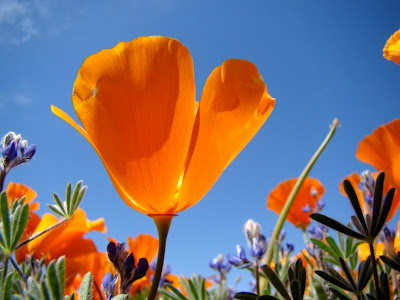 Thanks for the flowers Garry, they're gorgeous. It takes geology to create the environment for them.

You must be a great teacher and great observer of California's faults.