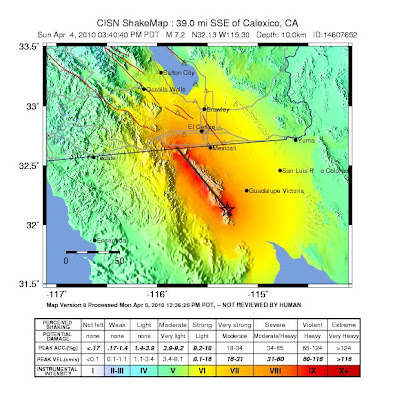 More detailed information is available about the Easter Sunday earthquake in Baja California Courtesy of the Southern California Seismic Network operated by Caltech and US Geological Survey (thanks to Lee at Arizona Geology for the link). The 7.2 magnitude Sierra El Mayor Earthquake appears to have ruptured the surface for a distance of 75 kilometers from the epicenter to the California-Mexico border, with displacements ranging as high as 2-3 meters. An overflight confirmed offsets along 28 kilometers of the Borrego fault, north to the international border. Fault motion was oblique, down to the east with a component of right lateral motion. The team from SCSN took some 1,300 pictures that will be posted soon. 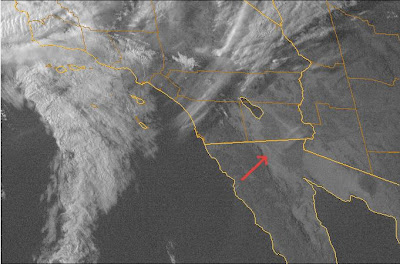 A satellite image shows the dust plume raised by rockslides in the mountains near the epicenter. The link at Gawker.com includes a time lapse sequence of the satellite view, and a link to the video of the immense dust clouds from the ground.
UPDATE: Lee Allison at Arizona Geology has been on top of the latest developments on the Sierra El Mayer quake. He has posted a number of pictures of road damage on Highway 5 south of Mexicali, including this one (photographer Danny Ashcraft): 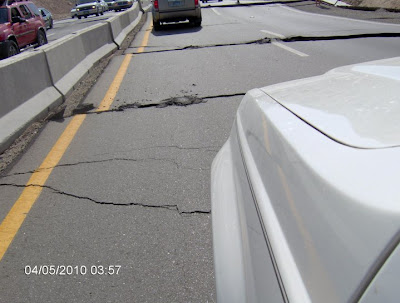 Note the right lateral offset of the road surface

UPDATE #2: The Southern California Seismic Network is beginning to release some of their 1,500 photographs of the fault ruptures on the Borrego fault and others. An example below! 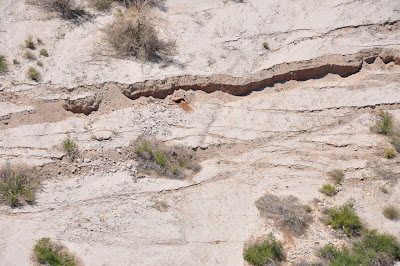 Amazing! The dust clouds really convey the power of an earthquake in a visceral way. My viscera are twisting as I write this from our unreinforced masonry house near the "due for a big one" Wasatch fault system.