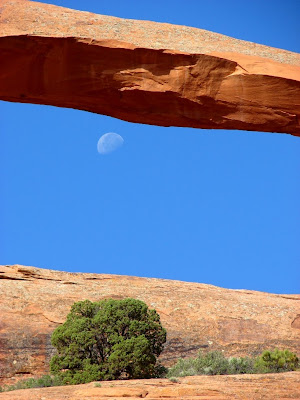 Callan Bentley at Mountain Beltway is hosting this month's Accretionary Wedge, with the goal of paying tribute to the extraordinary individuals who helped make our life, our science, and our planet better than they would otherwise have been: our geological heroes.


It took me awhile to consider who that hero would be, because I have had quite a few in my life...I've written about some of them, especially here and here. But given the coincidence of the Wedge and fortieth anniversary of Earth Day, I thought I would talk about one of the more important literary influences that led me to where I am today: a teacher, a geologist, and an unapologetic environmentalist: an advocate for the Earth, not because I love it more than the people that live on it, but because a healthy planetary ecosystem is a better place for people to live.

With that in mind, I offer up my geological hero: Edward Abbey. Anyone my age in the outdoor sciences probably traces their love of the outdoors to his rants in books like Desert Solitaire and the Monkey Wrench Gang, and it might seem odd to consider his screeds to be a celebration of humanity. In fact, one feels he would have preferred a world without humans (from the last chapter of Desert Solitaire):

"In deep stillness, in a somber solemn light, these beings stand, these fins of sandstone hollowed out by time, the juniper trees so shaggy, tough and beautiful, the dead or dying pinyon pines, the little shrubs of rabbitbrush and blackbrush, the dried-up stalks of asters and sunflowers gone to seed, the black-rooted silver-blue sage. How difficult to imagine this place without a human presence; how necessary. I am almost prepared to believe that this sweet virginal primitive land will be grateful for my departure and the absence of the tourists, will breathe metaphorically a collective sigh of relief - like a whisper of wind - when we are all and finally gone and the place and its creations can return to their ancient procedures unobserved and undisturbed by the busy, anxious, brooding consciousness of man.

Grateful for our departure? One more expression of human vanity. The finest quality of this stone, these plants and animals, this desert landscape is the indifference manifest to our presence, our absence, our coming, our staying or our going. Whether we live or die is a matter of absolutely no concern whatsoever to the desert. Let men in their madness blast every city on earth into black rubble and envelope the entire planet in a cloud of lethal gas - the canyons and hills, the springs and rocks will still be here, the sunlight will filter through, water will form and warmth shall be upon the land and after sufficient time, no matter how long, somewhere, living things well emerge and join and stand once again, this time perhaps to take a different and better course. I have seen the place called Trinity, in New Mexico, where our wise men exploded the first atomic bomb and the heat of the blast fused sand into a greenish glass - already the grass has returned, and the cactus and the mesquite. On this bedrock of animal faith I take my stand, close by the old road that leads eventually out of the valley of paradox.

Yes. Feet on earth. Knock on wood. Touch stone. Good luck to all."

A world without people? Maybe. But Abbey wrote his books to all of us, in hopes that his readers would come to understand the Earth in a different way. I grew up in the sixties, when the very idea of limiting our emissions from cars and factories was a laughing matter. Plumes of filth rising from smoke stacks was a sign of financial security. Dumping waste in our rivers was a convenient way to make bad things disappear. Paving over wildlands was a sign of success, of human domination over the land. Earth Day was first seen by many as another amusing hippie protest, all wrapped up in other protests over wars in faraway places. 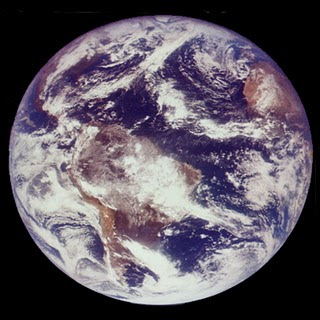 In 1967, the first picture of the entire Earth was taken from space. In 1968, Edward Abbey published Desert Solitaire. In 1970, the first Earth Day took place. I don't know that Abbey's book was as influential as the other two events, but when I picked up the book for myself in the early 1970's, it provided me a new way to look at the planet, and was one of several events that led me on the path into geology, and even more importantly, into teaching.

We as a people made progress towards a cleaner and safer world in the 1970's, with the Clean Air Act, the Clean Water Act, the Endangered Species Act, and the EPA (plus the Wilderness Act of 1964). There was a backlash in the 1980's, as the military-industrial complex caught on to the PR game. We lost many critical years in our fight for a sustainable clean energy future after 2000, but we may find ourselves forced to confront the issue as oil runs short. We appear to have confronted the problem of ozone depletion successfully.
But there are still so many problems. Today, humanity faces a craven political stalling game over global warming by those who stand to lose profits in the energy industry. That global warming is happening is not in doubt. That we have caused it is also not in doubt. Finding solutions will be difficult, especially in the face of a well-funded manufactured doubt "controversy". We face an appalling problem of soil erosion and loss. The agricultural soil base of our food supply was greatest some 10,000 years ago, and we have been losing it ever since. The vast increase in production of the last century has come from an intense application of energy and chemicals that will soon be in short supply.
The Earth is an impassive mother. She doesn't exactly care if we survive or not, and 99% of all the species that ever emerged on our planet are extinct, for many different reasons. We humans are apparently the first species ever to be aware of that fact. What choices will we make with that knowledge?
Today's picture is moonset under Landscape Arch, the largest span (290 feet) in Arches National Park, and the either the largest or second largest in the world.
Posted by Garry Hayes at 4:00 PM

Edward Abbey is a great choice for this post! His writings (and I have copies of most) are prosaic, interesting, and thought-provoking. Hayduke Lives!

Good choice. I'm sure Abbey influenced many, and continues to.
I've always thought that if our species hurts the earth to the point of our own demise, she will heal and be healthier for it. Yet maybe we can learn to change our ways and adapt to hers.