Scarps to the Left of Me, Sag Ponds to the Right, Here I am, Stuck in the Middle with You! 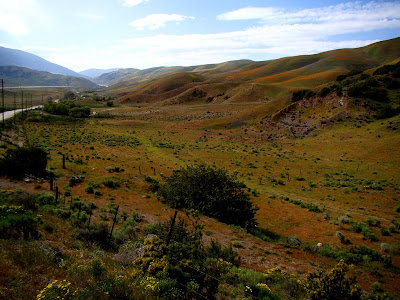 The San Andreas fault is the best known (and most feared) fault line in California, and yet few people know where it actually is, and might not even know it if they were living on it (and far too many people in the state do live on the fault line, not only the San Andreas, but many others as well). The San Andreas is remarkably accessible, and there are only a few places where the fault lies more than a mile or so from a paved highway. One very accessible site to see the fault can be found at Tejon Pass on the main freeway connection between northern and southern California. Interstate 5 crosses the fault at Gorman, but a stop on the freeway would be very dangerous. If you exit at Gorman and follow the frontage road east (Gorman Post Road), you can see some wonderfully exposed fault features from a safe vantage point. Unless the BIG ONE hits. Then again, I'd rather be out in the open watching a scarp forming than being trapped in a building somewhere.

The most obvious fault feature is the linear valley. In the picture above, the fault follows the shallow valley in the foreground to the notches on the horizon to the left. I was standing atop a scarp (a fault-formed terrace) that resulted from large earthquakes every few centuries (the last major quake here occurred in 1857, with a magnitude of about 7.8). The juniper bush is growing on the slope of the scarp. 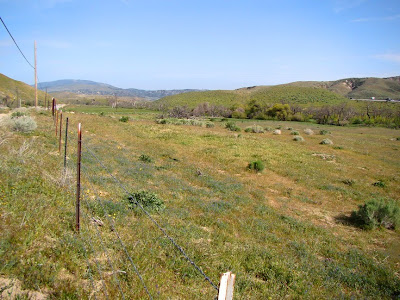 A little to the west of the first photo, the fault is marked by a linear pattern of springs and vegetation. The brush-covered hill just right of center is another fault scarp. 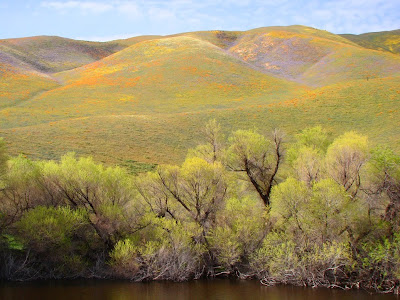 The motion of the San Andreas is right-lateral, meaning that objects on the side of the fault opposite the observer are shifted to the right. As mentioned in a recent post, the Neenach Volcanics which show up just east of here have been separated by 195 miles over the last 10 million years or so. The other half of the Neenach volcano is exposed at Pinnacles National Monument near Hollister in the Coast Ranges.
The lateral motion of the fault produces disruptions and offsets of streambeds, and lakes often result. The picture above is a sag pond on Gorman Post Road. If you think about it at all, natural lakes are a rarity in southern California. Many lakes result from Ice Age glacial scouring, which wasn't much of an issue this far south. Others, like Crystal Lake in the Angeles National Forest, result from landslides that block creeks. But a rather large number of lakes can be found along the trace of the San Andreas and other active faults, such as the one above. It's a great bird-watching spot too! 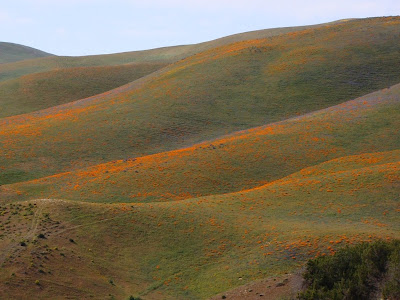 This is a serious geology blog, so you know that I wouldn't put together a geology blurb just so I could show pictures of the glorious wildflowers I saw last weekend...but I am in fact showing you some flower pictures. The slopes in the picture above were just west of the sag pond. They were gorgeous! Just the same, the Gorman stop is a great place to see some fault features at the cost of just a few minutes of your time while traveling on Interstate 5 any time of the year. And you know you needed a bathroom stop anyway....

Below is another gratuitous flower picture. The color explosion includes California Poppies, Lupine, and a blue flower I am not familiar with. An identification would be welcome! 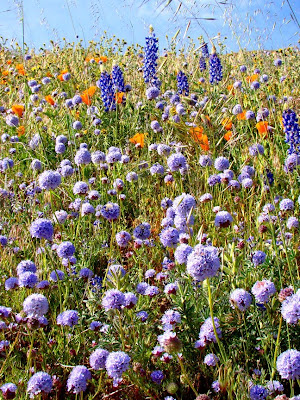 Gorman is a great stop for many things, including that bathroom break. Maybe the blue flowers are Beeplant?

Just north of Gorman, as I-5 curves and approaches the pass, there appears to be a rather spectacular exposure of San Andreas Fault Gouge in the roadcut. It's easiest to see when northbound; look at the roadcut across the freeway on the southbound side.