One of the Biggest Political Ironies I think I will ever see... 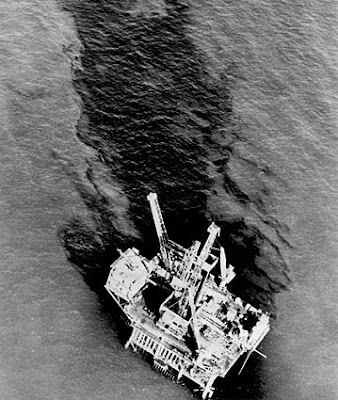 1969 Oil Spill in Santa Barbara Channel, California (AP photo from Los Angeles Times)
However one might feel about drilling for oil in the continental shelf of the United States, the events of the last month have to stand as one of the greatest political ironies in the country's history. One month after a Democratic (!) president opens up vast areas for offshore drilling, a massive explosion kills eleven people on an oil rig in the Gulf of Mexico, and a huge oil slick is making landfall along the shorelines of what will ultimately include four states. You may be able to think of some better examples, but it makes me think of the signing of the Treaty of Guadalupe Hidalgo which ceded California to the United States on February 2, 1848, when unbeknownst to the signing parties, gold had been discovered in California on January 24 of the same year. We are only seeing the beginning of what will be a long and painful time for the coastal cities, not to mention the ecosystems found there. The political ramifications will last far longer; the oil spill in the Santa Barbara Channel in 1969 still resonates today. And so does the 1989 Exxon Valdez disaster.

I hope that the damage can be contained. It won't do anyone any good if the beaches all along the southern coasts are coated with muck. I do hope it will start a national conversation about our priorities. Despite the shrill cries of "Drill Baby, Drill", pulling the oil out of environmentally sensitive areas will do next to nothing to achieve energy independence. Without imported oil, we would pretty much use up our entire inventory of US petroleum reserves in maybe five or six years. Where will we be, then? We need to plan for a post-petroleum economy before it is forced on us, not after. It is the only way to avoid an economic disruption that will make the present-day recession look like the Roaring Twenties. But how can you explain that to representatives and senators who are incapable of looking beyond their next election day?

Deep Sea News provides a very good timeline of the events in the Gulf of Mexico.

I don't want to make light of a horrible situation, but I hope no prominent politician stands up to say how absolutely safe nuclear power is now...
Posted by Garry Hayes at 8:56 PM

It is certainly beyond time for us to turn away from this oil based economy and look after our environment.

I was astonished to hear on an NPR news brief that BP was looking for outside help in stemming the oil flowing out of the well. Wouldn't it seem feasible for the oil companies to have a contingency stop-valve plan in case a platform sinks? Surely they had to have thought of this, no? Are there any EPA laws mandating such contingency plans (and having proof that said plans would function as proposed)? Just a thought...

There is an "infallible" blowout preventer that failed in this event. I had heard that the falling pipe column may have damaged it.

I've never been a fan of Obama's middle-road instincts regarding "clean coal" and other oxymoronic concessions to attract some legislative energy policy votes from the right. But he is a smart man and I'm sure the irony isn't lost on him either.