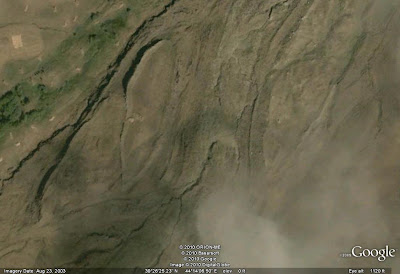 Folks caught on pretty quick to what I was showing in the previous post if the comments are any guide: this feature, seen anywhere in the world by any trained geologist, would be identified readily as a doubly plunging syncline, sedimentary layers twisted into an elongated bowl shaped form. But this particular fold in the rock carries a lot of emotional baggage, located as it is just a few miles from Mt. Ararat in Turkey. After a fuzzy picture of the feature appeared in LIFE magazine in 1960, a number of individuals quickly decided the feature had to be Noah's Ark, and a small cottage industry has grown around the selling of the idea.

As mentioned before, I have discussions with students about religion and science, and especially about the age of the Earth and evolutionary theory. They sometimes bring up items like this, in the full confidence that they have discovered for themselves the absolute proof of Noah, a worldwide flood, and a 6,000 year old earth. It's hard to be patient sometimes, to explain that a feature like this is easily explained by science, and that maybe, just maybe, the promoters of the "evidence" on the internet might not have the most honorable of motivations.

Here are some arguments about the age of the Earth and evolution you might not want to bring up:

3. There are no beneficial mutations.

4. Darwin recanted on his deathbed.

5. Woolly mammoths were flash frozen during the Flood catastrophe (with buttercups in their mouths!).

6. No new species have been produced.

7. Ron Wyatt has found much archaeological proof of the Bible, including the Ark of the Covenant, and also the Ark of Noah, the subject of the picture above.

8. Evolution is just a theory (I've discussed the meaning of theory in the past).

10. The Paluxy tracks in Texas prove that humans and dinosaurs co-existed.

12. The speed of light has decreased over time.

13. Archaeopteryx is a fraud.

I'm not going to waste my time or yours explaining why these phenomena and assertions are unusable in an argument over the age of the Earth or evolution. I don't have to. I derived this list from a young-earth creationist organization website. It is they who say these shouldn't be used in an argument with scientists. Even they know these arguments are bogus (you are welcome to Topeka, er, uh, Google "creationists arguments that shouldn't be used" if you are interested).

There are plenty of other assertions made by young-earth creationists that can be used in a debate that are equally untrue, but at least the YEC folks believe them. To use "facts" like those on the list above reveals a distinct lack of basic internet research skills and a lack of critical thinking. When a person "wants to believe", they are easily duped...
Posted by Garry Hayes at 6:27 PM

For creationists and others who prefer to live in denial of physical reality, using nonsense as explanations is much easier than thinking and seeking real answers. It's a part of our corporate sponsered,self-indulgent and mindless media fed culture. Sometimes I feel in some areas of our culture it is appropiate to call this era the "age of stupid".

Today is the first time to visit your blog and I really like it, but then you had to go and offend me. I believe in God, the creator of the heaven and the earth. I don't believe in the earth only being 6,000-10,000 years old though. Don't lump all of us creationists in one boat that you would like to sink because we don't agree with evolution. There are many serious scientists who have real problems with the theory of evolution, yet know that the earth is much older than dirt. When young earth people talk to me about the age of the earth, I just tell them to look at the Hawaiian islands and ask them to explain how all the islands have inactive volcanoes on them now that they have drifted off the hot spot where they were when they were formed. The Big Island is now over it. How could each one form, move, erode to be able to grow things, etc. all within the span of 10,000 years? It would take longer than that for just the Big Island alone. They have no explanation for me.

Gutenberg, thank you for your comment, but if you think that my intention is to insult people who believe in God, you couldn't be more wrong. My argument in this post and others over the last two years (http://geotripper.blogspot.com/search?q=creation+science) has been with the mis-use of science by creation-scientists. Belief in God is a matter of faith, and is a different realm of investigation than the earth sciences and geology. I think you would find that we have more in common than you realize. I am not using my blog to parade my personal beliefs, but you might find a clue in an organization that I agree with: http://www.wheaton.edu/ACG/

Thank you for the link to the Christian geologists site. I have not had time to explore it yet, but will do so soon. Another site I visit often is http://www.reasons.org/

The founder is Hugh Ross. I am not sure if you have heard of him or not, but he is very good on the big bang stuff. He also looks at the geology and sees that it is telling us the earth has been here a very long time in one form or another. Again thank you for your blog. I am sure we have much to agree upon.