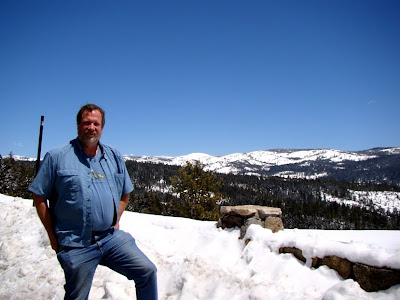 Well, this is what a "compressed academic schedule" looks like...my first day of summer employment hiatus. A few years back the school wanted to run three full semesters a year, so shortened our fall and spring semesters to 15 weeks, adding a few minutes to every class and laboratory section. Some people like it, but it has had an unfortunate impact in the sciences, as we went from 17 labs to only 15. You can't spread the content of the two missing labs very well among the others. Unfortunately the summer semester was decimated by the California budget crisis, so I am presently idle, as my summer classes were canceled.

Well, I don't want to vegetate, so I am off to the eastern side of the Sierra Nevada for a conference of the National Association of Geoscience Teachers. To get there, we had to drive over Carson Pass on Highway 88 through Kirkwood Ski Resort, to Genoa, Nevada, then to Lee Vining and Bishop, a little over 300 miles. It's April 30, and it was snowing in the mountains yesterday! Luckily, the roads were dry and clear today. 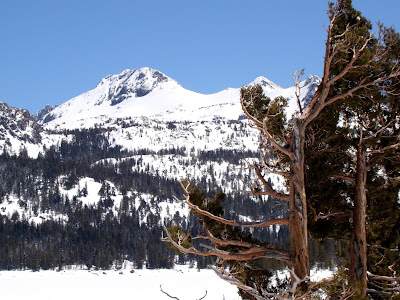 The snow pack is obviously still pretty thick, so the geology is a bit obscure, but along the way to Carson Pass we passed Caples Reservoir, where we could see the high peaks composed of andesite lahar deposits from around 10-20 million years ago. They have been extensively modified by the Pleistocene glaciers, and make a beautiful backdrop to the lake. 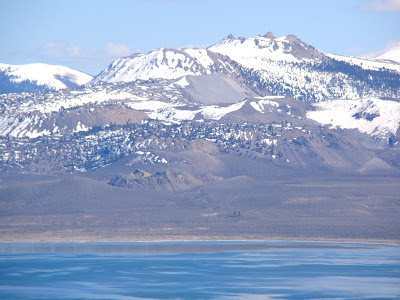 We made our way south to Conway Summit, where we had a startling view of Mono Lake and Mono Craters. Mono Lake is the very salty remnant of an ice age lake that was hundreds of feet deeper, and once spilled over into the Owens Valley. The only way the water leaves to day is by evaporation. The story of the near destruction of the lake ecosystem because of the diversion of water by Los Angeles could fill many blog posts (and probably will before too long).
The Mono Craters are actually rhyolite plug domes that have erupted between about 35,000 years to only 600 years ago (the youngest, Panum Crater, is the small one in the foreground). They may be part of an evolving caldera, but mass destruction is probably hundreds of thousands years away. 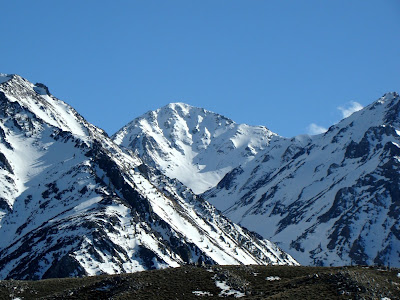 In the late afternoon, we crossed through the Long Valley Caldera, which did cause massive destruction across the entire region 760,000 years ago. An eruption explosively tossed 130 cubic miles of ash across most of the western United States, and the ground over the magma chamber collapsed to form a hole that is 10 miles by 18 miles, and once may have been two miles deep. The high peaks of the Sierra Crest that form the western and southern edge of the caldera are composed of Paleozoic and Mesozoic metasedimentary and metavolcanic rocks that have been intruded by Cretaceous granitic rocks.
Tomorrow we will be geotouring through region, and more pictures will undoubtedly follow! Mrs. Geotripper took the top and bottom photos, I took the others.
Posted by Garry Hayes at 11:18 PM

What about the eruptions in the lake, aren't they younger? Don't the volcanos all follow the same line through the area?

Sorry, I was referring to the Mono lake blog.