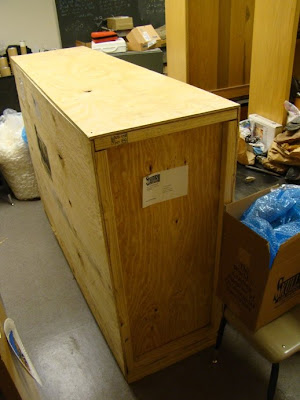 Christmas comes early...or late! What in the world could be delivered in a box like this? It weighs a lot, and it really doesn't fit in our storage room, but hey, a big gift is a big gift, no matter that it is April. A few dozen screws later, and some heavy lifting of plywood slabs, and our treasure is revealed! 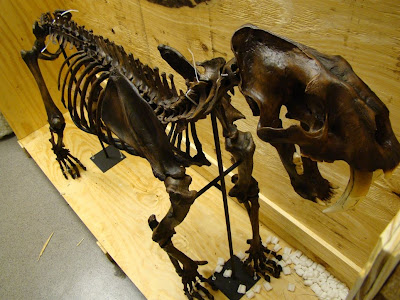 It's a full-scale model of a Smilodon californicus from the La Brea Tar Pits in Southern California. We selected this creature to be one of the focal points of our Community Science Center that will "soon" be constructed on our campus (yes, there are the inevitable delays). The building will house the physics, chemistry, biology and earth sciences programs, a planetarium, an observatory, and best of all, the Great Valley Museum (currently 'housed' in a refurbished old house). We picked it for several reasons: it is the state fossil of California, it lived in our immediate vicinity, and it will have a lot of the "Wow!" factor that will make the center a great place for kids to visit. Our building is being built with bond issue funds, but the Smilodon was purchased with donations and fundraisers: we sold barbecued burgers to the modern day carnivores on our campus to purchase this extinct carnivore... 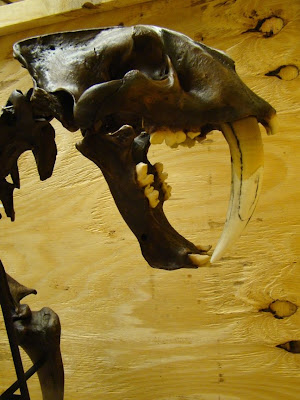 Several months ago I blogged about the Smilodon as part of my "Other California" series. A portion is repeated below:

"Prior to 12,000 years BP, our state would have been an intimidating place. Packs of Dire Wolves and American Lions roamed our prairies, seeking their prey from among the herds of horses, camels, antelope, bison, elk, mastodons, and mammoths. Short-faced bears, larger than grizzlies and polar bears, would have at least considered having you for lunch. In more forested and brushy areas, the large plant-eaters faced a threat from one of the most intimidating predators of all, the saber tooth cat (Smilodon californicus).

The Smilodon californicus was selected as the state fossil of California in 1973, beating out the trilobite species Fremontia fremonti for the honor. I understand the desire of many of the paleontologists to have a trilobite named the state fossil, but I must say I get a lot more oohs and ahs from elementary students when they see my Smilodon skull during their visits at the department. They are absolutely fascinated to find that the animal once lived, quite literally, in their backyards. So do I!"

My what Big teeth that cat had. A great mascot and addition to the Science Center, may it be built soon.

Where did you buy it? I have a replica skull from Ward's, but I've never seen the full reconstructed skeleton on offer...
C

That is just super cool. Excellent choice and a perfect choice for California.

We got it here: http://www.skullsunlimited.com/record_collection.php?id=20

brings to mind the exhibits we saw at museum in chicago in november. congrats!