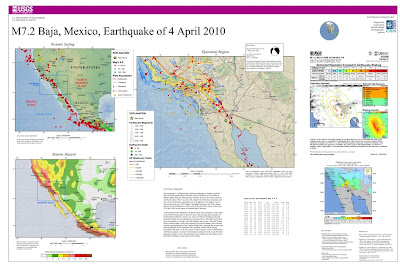 U.S. Geological Survey poster on the April 4 Baja California Earthquake. Click on the image for a medium view. For a larger view, click here

More information is coming out about the nature of yesterday's quake in Baja California. The magnitude 7.2 tremor is the largest event to strike the region in more than 100 years, although events in 1915, 1934, and 1940 were comparable. The first-motion tensor diagrams indicate that the event occurred with primarily right-lateral motion with a slight component of vertical offset as well. This would translate to a fault rupture at the surface in which the opposite side of the fault moves to the observer's right, perhaps several feet, but also rising a few inches, forming a low terrace. We are awaiting confirmation of any kind of ground rupture, which would also confirm that the event took place on the Laguna Salada fault, as is highly suggested by the pattern of the aftershocks.

A large number of aftershocks have shaken the region, and these can be expected to continue for a number of years, although they will decline in intensity and frequency. The quake also appears to have triggered small earthquakes on other faults in the region. There are concerns about how this quake might be related to the highly stressed south end of the San Andreas fault system to the northwest at Salton Sea. The southern section of the San Andreas fault is considered to have a 59% probability of rupturing with a 6.7+ magnitude quake in the next 30 years (See the Uniform California Earthquake Rupture Forecast for details). The quake yesterday may have heightened stresses on the San Andreas, but it also may have released some of it; I await word from the geophysicists who are no doubt analyzing the data right now.

People all across southern California felt the earthquake. A quake has only one magnitude (7.2 in this case), as this is the measure of the total energy released by the fault rupture. People at varying distances from the quake feel a different level of shaking, which is described as the intensity of the quake. Intensity is measured on a 1-12 scale (the Modified Mercalli Scale), and a particular earthquake will have many reported intensities to the extent that the earthquake shaking and ground motion can be mapped.

One more comment, or really a commentary: my internet was out this morning, so I turned on the television to get the latest news on the earthquake. Let's see: a major earthquake, the biggest in a generation, strikes southern and Baja California, affecting millions. And Tiger Woods started playing golf again. Guess which story the cable news networks were spending their time on this morning? Truly pathetic...

Update: On the other hand, this is cool; check out the dust kicked up by the quake. Hat tip to Jeff for the link!

Julian of Harmonic Tremors has gone down with a team from the Southern California Earthquake Center to install GPS and look for the surface rupture. There should be pictures in the blogosphere soon!

Since Tiger aced-out the EQ coverage, would this be considered a fore shock. Thank you, thank you, I'll be here all night.