The Other California: Back on the Prairielands 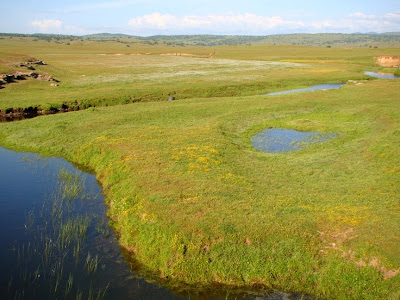 I started my Other California series last year with a post on the little-known and under-appreciated prairielands of the state, a vast landscape surrounding the Central Valley (and which once was the Central Valley in the days before agricultural development). When I conceived of the idea for the prairielands posts, I was in the Sierra Nevada foothills in late fall when all was dry and barren. I revisited the original site today to witness a different world, one that was green and full of life.

The soils in our part of the Sierra foothills are underlain by andesitic mudflow (lahar) deposits that poured off the higher mountains around 9-10 million years ago. The hills in the distance (and around the lake below) are metamorphic rocks of the Foothills Terrane, dating from around 200 million years ago. 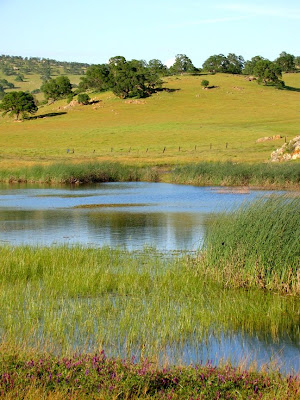 We had a reasonably decent rain season, with close to 100% of average precipitation. We really needed about 120% to overcome the three years of drought, since many of the soils around the state are exceedingly dry and need to be replenished, but on this day there was plenty of water in evidence in the normally dry creekbeds and stockponds. One of our favorite stops is a little lake on Willms Road in the vicinity of Knights Ferry on the Stanislaus River. Vast numbers of birds are usually in evidence. 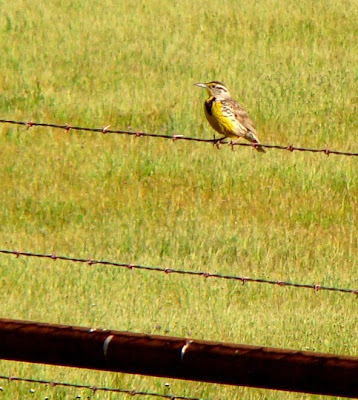 Since getting my first digital camera 9 years ago, I have concentrated on geological subjects, but I have been adding more plants and animals to my repertoire. There is an old adage about geological field work, that you will spend an entire field season collecting every unusual and unique rock in sight, and later come to the realization that you never collected a single specimen of the most common rock in your study area. My bird pictures are kind of like that. I have few pictures of the most common birds in our area.

The fuzzy picture above is my first photograph of a Western Meadowlark. They were very much in evidence, as their calls could be heard every place we stopped, but they were shy about being approached, so this one was taken with a 30x zoom (lest you think I have sophisticated equipment, that is optical and digital zoom together). 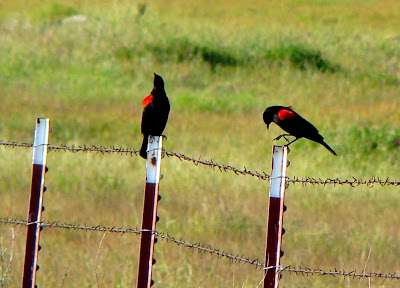 The second bird shot is the exceedingly common and obviously-named Redwing Blackbird. These were a couple of guys hanging out, hoping to pick up some ladies. The females are decidedly not well-named, being more drab brown without the red wing spots.
Posted by Garry Hayes at 10:21 PM

Nice to see CA looking green. And you spreading out beyond geology. Birds are tough for me to take pics of, but I never use the digital zoom too fuzzy, only the optical. Nice job.