The Other California: The Volcano Underground

Can you name the deepest cave in the United States? The answer can be a little tricky. Some sources will say that Lechuguilla cave, the recently discovered wonder in Carlsbad Caverns National Park is the deepest at 1,604 feet (the cave is also incredibly long, with 127 miles of passageways). But if one defines the depth of a cave as the vertical distance between the highest passageway to the lowest passageway, the deepest cave in the United States is in...Hawaii! Kazumura Cave has a measured depth of 3,614 feet. Caves in Hawaii? Actually, 5 of the 10 deepest caves in the country are in the Aloha State. And to add to the confusion, if you explore the full length of Kazumura, you will travel some 40 miles and probably go no deeper than 40 or 50 feet below the surface of the earth. Confused?

When thinking of caves, it is common to think of voids under the earth's surface that formed as acidic water ate away at rocks like limestone or marble, and filled with stalactites and stalagmites. Hawaii has no layers of limestone to speak of, but it does have volcanoes. How can a volcano make a cave?

The more relevant question is: how can basalt lavas flow for miles from the erupting vent? Wouldn't the lava cool after just a few hundred yards and become solid? As it turns out, lava does cool quickly, but it also forms a crust, and volcanic rock is a great insulator. The lava can continue flowing beneath a solid crust for miles without any significant temperature loss. The molten rock travels through an extensive network of lava tubes to extend the length of the flow. An active lava tube system can be seen in the pictures below from Pu'u O'o on the Big Island of Hawaii.

The picture below is from a point above the Pu'u O'o vent looking towards the ocean entry in the distance. The roof of the lava tube has collapsed in several places giving rise to the steam vents. 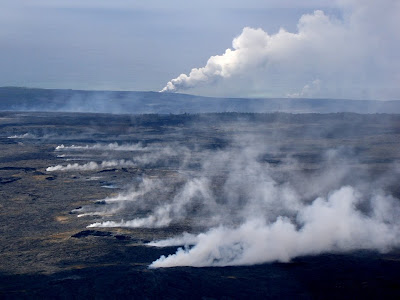 The caves form when the eruption ends and the lava tubes drain. The tubes are often big enough to walk (or crawl) through, and because they can split into multiple passageways, they can be a lot of fun to explore. Kazumura Cave starts near the summit of Kilauea at almost 4,000 feet, and has continuous passageways that reach the coastline near Hilo, 40 miles away. It is the longest known lava tube in the world.

Hawaii has a number of pretty incredible lava tubes, but isn't this post supposed to be about California? It turns out that the continental United States has numerous lava tubes, and California has some world class examples. The most extensive collection of lava tubes to be found is in Lava Beds National Monument, on the flank of Medicine Lake Highland. I've been exploring some of the surface features of the monument in recent posts, but the main attraction of the park is the system of lava tubes, some 700 of them totaling more than 30 miles of passageways. Many are open to exploration by park visitors. 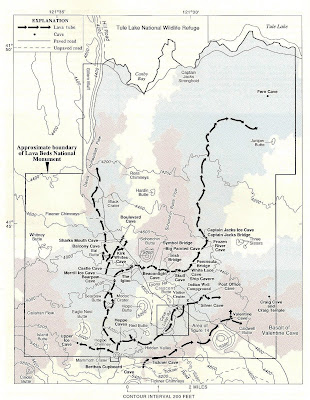 We will explore some of California's Volcano Underground in coming posts!

Can you actually explore 40 miles of lava tube at Kuzamura? That would be cool. I used to lead tours at Ape Cave, 1.5 mile lava tube on the south side of Mt St Helens. No much for side passages yet lots of breakdown from the roof. The formations are so different everywhere I looked.

There is a tour company that leads long tours through parts of the cave. It has about 100 open skylights along its full length, but apparently you can explore the full length.